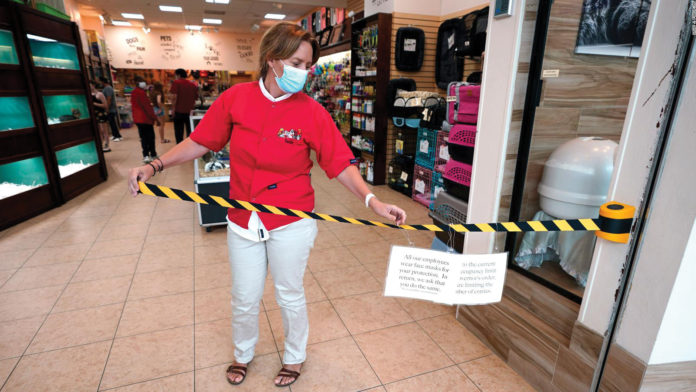 Workers across the country are facing unacceptable choices: risk your health and go back to work, or face economic hardship and maybe be fired and cut-off from unemployment. Meanwhile the richest 0.01% have retired safely to holiday homes and bunkers to sit out the pandemic. We should be under no illusion – this is what the ruling elites have always done in times of hardship. The working class has been left on the front lines in times of pandemics, war, and depression.

Is it any surprise that workers are fearful of the future? Particularly frontline workers who are disproportionately lower paid, women, and people of color. As the billionaires try to drive through a shoddy reopening of the economy, we need to discuss in our workplaces and communities what a return to work that prioritizes the needs of the working class would look like. There should be no return to normal.

Workplace needs to be safe:

While still on a small scale, workers are starting to rediscover their real power – the power to stop production through a strike. The recent upturn in walkouts and strikes have won important gains in safety. This needs to be turned into organization. Unions need to immediately launch organizing drives in non-union workplaces across the country.

We need to organize safety committees in all workplaces. They should be elected by workers, without the bosses present. Shop floor power is essential across union and non-union workplaces. If this starts as a closed online group, as we saw with the Instacart workers, then this is a first step. The next crucial step is to build support on the shop floor through lunch and break time meetings with supportive coworkers and without management present.

No safety – no work:

We need social distancing protocols and personal protective equipment (PPE). This could include staggered shifts or an expansion of workspace per worker.  If that means slowing down the pace of work – then slow it down!

We need to demand:

The right to PPE. The right to social distancing from other workers and the public. No retaliation or threat of unemployment against workers who refuse to work in unsafe environment

The economy is collapsing into a new depression. Unemployment is approaching its highest level since the Great Depression.  Forbes magazine states that 42% of jobs lost will not return.

We need to demand:

No cuts in hours or wages – tax the wealthy and big corporations to pay for fully funded public services, including robust unemployment benefits. The super-rich should pay for the failure of their system.

We need an extension of current unemployment benefits – including the $600 a week top up. No one should be threatened with losing their unemployment if they refuse to return to an unsafe workplace.

The labor movement should be on the front lines fighting for a massive jobs program, for a reduced workweek to share out the work with no reduction in pay, and for a living wage for all those laid off or unemployed.

This is the only way to tackle climate change and provide jobs for tens of millions of workers. To be successful this needs to be tied to public ownership of the massive energy companies and banks. This alone can make possible a Green New Deal in the interest of workers, not the profits of the bosses.

No evictions or foreclosures:

No one should lose their homes. We need to demand a continued extension of eviction and foreclosure bans through this depression.

We need to organize to fight every attempt by landlords at evictions.

Big landlords should not ride out this crisis while working people hemorrhage money to make rent. Rent should be cancelled for the duration of this pandemic and back rent should be forgiven.

For universal rent control on a national scale and a tax on the wealthiest corporations like Amazon to build high quality, publicly owned social housing. Immediately bring the top profit-making corporate landlords into public ownership.

Labor needs to fight every job loss. We need to protest any further bailout of the bosses. Rich CEOs squandered their recent mega tax break. They failed to invest back into the workplace. Instead they lined their pockets and those of rich shareholders.

We need a socialist approach to bankruptcies which starts from the needs of the working class.

If a big corporation declares bankruptcy, we should demand their financial records be inspected by workers’ representatives to see if they are really bankrupt. If they are not bankrupt – no layoffs. If they are bankrupt, this demonstrates the failure of the owners, not workers. We should demand that jobs be protected and the ownership of the company passes into public hands through public ownership, with the workplace retooled if necessary. Workers and the community should then make decisions about how the workplace can provide products and services that working families need.

With states facing huge deficits, they are already looking to cut spending on needed social services like Medicaid and SNAP. Working people shouldn’t suffer due to the backwards priorities of capitalist governments. We need to tax the rich and big corporations locally and nationally.

The federal government should use a tax on big business to provide disaster relief to states. This money should not be used to bail out banks or major corporations but should be put directly into providing needed social services to working people.

Labor movement needs to step up:

Trade unions are the only organizations workers have to directly defend their rights. At the same time, the union leadership needs to change its approach. The leaderships of most major unions have been woefully inactive during this pandemic and have not stepped up to champion the demands of their members or organize the unorganized. (With a notable exception being National Nurses United.)

Out of this pandemic and depression, we need to build radical fighting unions which help organize social struggle of all workers against eviction, poverty, and for full employment on living wages.

For a new political party for working people:

The enormous engagement in Bernie Sanders’ electoral campaign shows the massive support that exists among working people and young people for a pro-working class program. The Democratic establishment was prepared to go to any length to stop Sanders and unfortunately he capitulated. This demonstrates how the Democratic Party is not a vehicle working people can use to transform society. We need a new workers party that organizes and fight for workers’ interests and is committed to socialist policies to point a way out of the horrors of capitalism for working people.