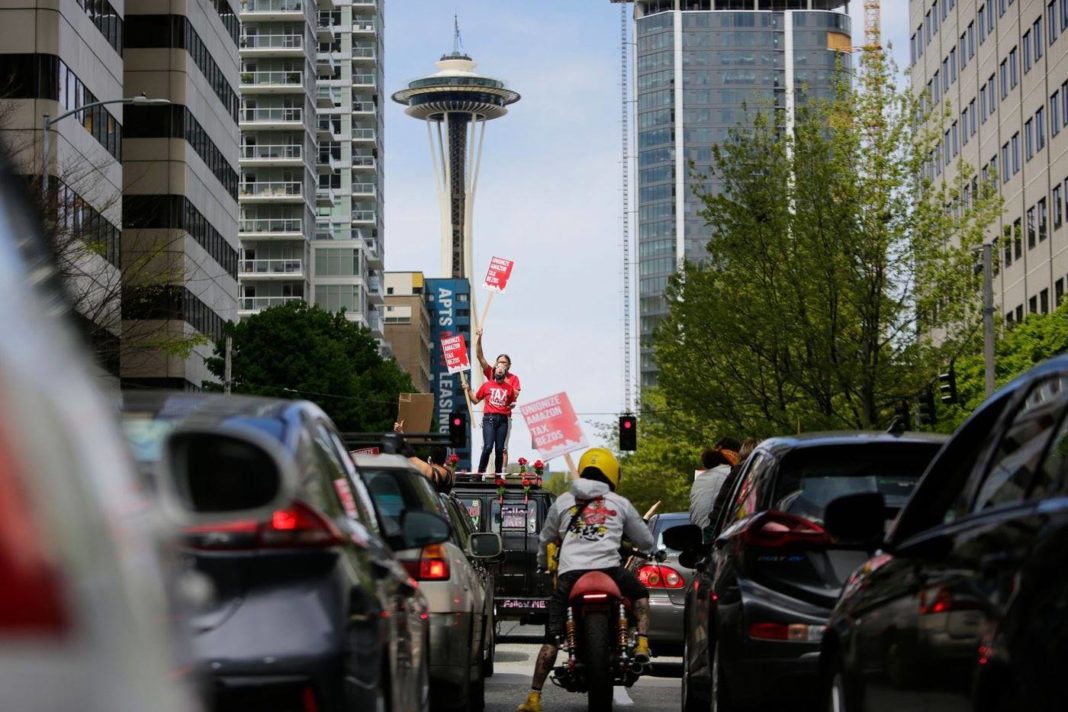 At noon on May 1, the Tax Amazon movement held a car caravan protest to demand the passage of our tax on our city’s wealthiest businesses. More than 60 cars circled the Amazon Spheres, joined by motorcycles, bicycles, and pedestrian protesters wearing masks and observing social distancing. People who arrived on foot stood apart on the sidewalk, with picket signs calling to unionize Amazon and tax Jeff Bezos in hand, as well protruding from cyclists’ backpacks and car windows.

Occurring on the historic International Workers’ Day, or May Day, the demonstration was in solidarity with the workplace actions planned by workers at major companies like Amazon, Instacart, and Target, as well as the tenants across the country who have organized rent strikes.

The links between the unsafe conditions at these massively profitable companies to the political power they wield to attack worker’s rights and dodge paying taxes, between the poverty wages they pay these essential workers and the third of renters unable to pay last month, were made clear during the rally.

Livestreaming of the event included a panel of speakers who are active in these campaigns. Seattle city councilmember Kshama Sawant came on first, describing how working people have been facing a massive crisis of housing affordability and homelessness, and now have a triple emergency of the existing housing affordability crisis, a public health crisis, and with the emerging economic recession that is projected to be the worst we’ve experienced so far in our lifetime, a jobs crisis.

Faith leader Reverend Angela Ying spoke to her experience of struggling to meet the needs of her community, “The reality is, all over our city, we have neighbors who cannot pay their rent. We have children, along with our poor and elders, who are hungry and without jobs.”

Amid the frequent horns from the procession, traffic would snag as new cars joined with home made signs draped over the sides. A motorcycle threaded between lanes, the rider with a picket sticking from the neck of their shirt.

Amazon worker Matt Smith described the conditions at his delivery station in Kent, WA. His boss Jeff Bezos has increased his wealth by $33 billion since the outbreak and Amazon has seen record-breaking stock values, the company raking in $11,000 a second. Meanwhile, Amazon has been doubling down on its retaliation against workers who raise concerns.

Wrapping up the vibrant protest at Amazon’s headquarters, the caravan made its way to Eastlake to property management company Cornell & Associates, in solidarity with tenants organizing a rent strike. Tenant Sean Case spoke on behalf of the action he and his neighbors were taking to meet the needs of the most vulnerable in their building.

“We got a response from Cornell & Associates saying, “Too bad, so sad. Here’s some charities to reach out to. You can ask your parents for money, go into credit card debt, stuff like that.” We’re expanding our fight to other Cornell buildings now, because we know other tenant organizers have gotten a similar response. It’s a total denial that there’s an emergency going on right now.”

Sean lost his job on March 13 due to COVID-19, and said several of the other tenants in his building did as well shortly after. He said he sees their rent strike being tied to the Tax Amazon campaign because the question is going to be: Who’s going to pay for this crisis?

Once Sean and the caravan arrived at the property management company, he read aloud and taped a message to their door on behalf of four complexes organized through the Cornell & Associates Tenant’s Alliance, stating their collective withholding of rents due to many tenants’ inability to pay rent or to pay in full.

The Amazon Tax legislation brought to Seattle City Council by councilmembers Sawant and Morales would raise $500 million annually, with the first year having $200 million in relief for working families, providing four months of $500 payments to 100,000 households. The other $300 million would be put to providing union wage paying jobs building permanently affordable social housing. After the first year, the full $500 million would be put to use building thousands of homes for working people along with green renovations of existing structures.

The connection between the movements to Tax Amazon, RentStrike2020, and workplace actions at major employers is clear. Under this crisis-ridden capitalist system where obscene wealth is concentrated into very few hands, the same workers facing dangerous conditions and low pay or unemployment clock out only to face increasingly unaffordable and insecure housing.

By uniting these movements, where success in meeting our demands would benefit all workers, we stand a much better chance of winning safer workplaces, better pay, lower rents, and stronger programs for working families paid for, finally, by big business instead of the rest of us.