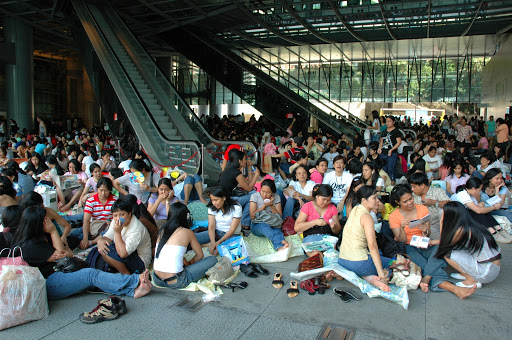 Fear of illness, extra workload and cancellation of day-off

“I haven’t had a day off in two months because of the coronavirus,” says Seputih an Indonesian domestic worker. “My employer pays me for a day off, but in fact there’s no day off. For the sake of my health I agree not to take it”.

Sunday, a mandatory day off for domestic workers, has previously been their only chance to rest, relax and meet friends. But under the Hong Kong government’s push for them to stay at home, they are stuck in their work environments permanently. Some have been threatened with dismissal by their employers, fearing they will bring the virus into the home if they are allowed out on Sundays. Yet the same logic doesn’t apply when domestic workers are sent out to do shopping or walk the dog.

The coronavirus has been a heavy blow for workers everywhere with emergency restrictions, company closures and loss of income. But the poorest and most vulnerable sectors of the working class are shouldering the biggest burden. In Hong Kong that is the 400,000 migrant workers mostly from Indonesia and the Philippines. They face a vastly increased workload, longer hours and even more restrictions on their freedom and privacy.

While self-isolating means less or even no work for many around the globe, for domestic workers it means more work than ever, but of course without extra pay. The plight of Hong Kong’s migrant domestic workers has been condemned as “modern slavery” in numerous global studies, although their counterparts working in Saudi Arabia and other Gulf states face even tougher, more oppressive conditions. In societies like uber-capitalist Hong Kong, with a long neglected and stunted social infrastructure, the low-paid female migrant workforce is the government’s substitute for building viable childcare, after school and elderly care systems.

“I have a lot more work now because the employer’s son doesn’t go to school, but sir and ma’am are always working,” says Seputih’s friend and fellow Indonesian migrant Vant. Like many other domestic workers, looking after children is part of her job.

In a recent survey by the Asian Migrants Coordinating Body (AMCB) over half of domestic workers said their workload has increased since the start of the outbreak. With schools closed for the past ten weeks and elderly people the most vulnerable risk group, these added burdens fall largely on migrant workers. Also, with many more people now working from home it means domestic workers are more closely monitored and supervised by stay-at-home employers.

The strict live-in rule, a hugely oppressive and invasive law even in normal times, has become more unbearable during the outbreak. By law, domestic workers — who often don’t have their own private room — are forced to live with their employers. The penalties for violating this law are steep fines, imprisonment and deportation. There’s no possibility to “go home” at the end of a shift. Hong Kong apartments are the smallest in the world, on average around half the size of apartments in Manhattan, New York, and 60 percent smaller than Singapore’s.

Half the world is experiencing a form of “cabin fever”, being cooped up for long periods in a small space, which is taking an inevitable toll on mental health. But this is even worse when you are not a family member, but their “maid”. Domestic workers can become the household’s shock absorber as moods sour.

It is also much harder for domestic workers to take a break or even to use their phones during the pandemic.

“Most of my friends are depressed by this situation,” says Seputih. “The employer works every day at home, so the work sometimes doesn’t stop. There’s no freedom, for example, if you want to phone your family in the village [in Indonesia] you have to wait for the employer to go out to the shops first.”

The pandemic coupled with the capitalist recession has triggered a wave of economic destruction and layoffs globally, including in Indonesia and the Philippines, putting even greater pressure on Hong Kong’s migrant workers. They fear being sacked and fear being infected, which in many cases would lead to dismissal.

In the Philippines, 500,000 jobs have already been destroyed in the past two months. Indonesia’s government warns the Covid-19 crisis could lead to 5.2 million job losses and an extra 3.8 million below the poverty line. These are societies with no safety net or unemployment insurance: no work, no pay! Even before this crisis migrant workers in Hong Kong were often the main breadwinners for their families back home, including in many cases their own children, who they normally get to visit once a year. Their education, medical costs and economic survival depends on the income their mothers can make in Hong Kong.

Socialist Action (ISA in Hong Kong) calls for the immediate reinstatement of migrant workers’ rest day. But this also necessitates new policies to end the disgraceful dumping of domestic workers who are left to congregate on footbridges and in parks because there are no affordable facilities for them to come together. As on every other level, the government offers migrant workers the absolute minimum of provision. Socialist Action calls for government investment to build or expand existing public community facilities to enable migrant workers to study, use internet, hold meetings, parties and leisure activities under safe and sanitary conditions.

There are currently around 87,000 empty hotel rooms in Hong Kong due to the collapse of tourism with “ghost hotels” everywhere. As an immediate crisis measure these rooms could be requisitioned to offer migrant workers free-of-charge a weekly 24-hour get-away from their daily claustrophobic work conditions. The hotel industry like other capitalists are clamoring for a government bailout, but we say there should be no payment from public funds without full public control and access to these resources.

We demand the government’s HK$10,000 special cash handout to all permanent residents should also go to migrant workers. The government’s rationale for issuing this one-off payment (in line with other governments’ resort to so-called helicopter money) is to mitigate the economic effects of the pandemic and support the collapsing economy especially the retail sector. By both arguments it’s not just unfair but also illogical to exclude migrant workers who need this money more than most. Not least this is to buy masks and sanitizers, which employers are supposed to provide but in many cases don’t.

The government’s disgraceful Scrooge-policies for migrant workers need to be scrapped, starting with the live-in rule and the two-week rule (which forces migrants to leave Hong Kong after 14 days if they are sacked and can’t arrange a new contract). Both are measures of social policing that severely limit the rights and mobility of migrant women.

The migrant worker’s Minimum Allowable Wage (MAW) of HK$4,630 per month, which is the norm rather than a minimum, needs to be increased. Socialist Action calls for migrants to be included under the minimum wage law, abolishing this discrimination once and for all. But the minimum wage (currently HK$37.50 per hour) is far too low also for local workers. Rather than opposing the extension of the minimum wage to migrants as “too costly”, union leaderships should be focusing on the need for organized struggle to force through improvements, especially at a time when the government is drowning the economy in money to protect capitalist interests from the effects of the crisis.

Migrant workers like the rest of the working class in Hong Kong need to organize themselves into unions and working class political organizations in order to collectively bargain, strike, and defend their rights. But they should not be left to stand alone.

The recent wave of newly established Hong Kong trade unions, still at an early stage, needs to reach out and offer solidarity and a common trade union vehicle to migrant workers, not separate migrant unions. They are the most exploited ten percent of the Hong Kong labor force, but also share rich experience of workers’ struggles across the Asian continent, representing all-important international connections. This is something the emerging trade unions lack and need.

Only common struggle by all workers regardless of nationality can hold the line against the wave of attacks on workers’ rights and freedoms, jobs and livelihoods, which has been unleashed by this crisis.

Socialist Action (ISA in Hong Kong) has organized many campaigns together with migrant workers to fight for their rights and build for united working class struggle — against racism, sexism and modern slavery. In today’s unprecedented capitalist economic collapse and health emergency this struggle is more urgent than ever. If you want to join us contact Socialist Action at socialist.hk@gmail.com