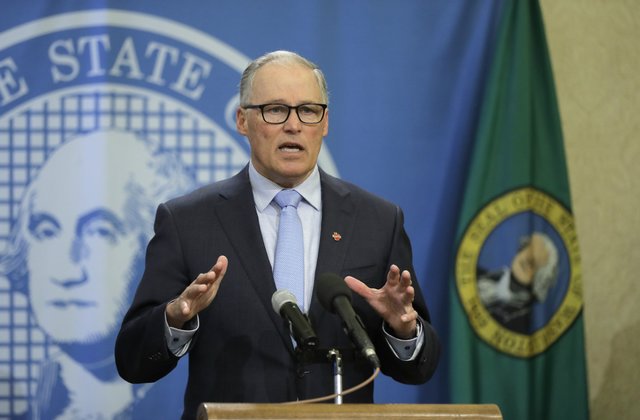 In the context of the wave of COVID-19 infections and deaths, Governor Jay Inslee enacted a stay-at-home order on March 25, and since that time nearly 600,000 workers have filed for unemployment. State tax collections have been hit hard, due to their dependency on nickel and diming regular people through sales taxes.

The governor’s budget director Michael Schumacher said, “The decline will likely be at least as bad as, if not worse than, what we saw during the Great Recession.”

Rather than taxing big business or the rich, Inslee and the political establishment are attempting to make working people pay for the crisis. Governor Jay Inslee has vetoed $445 million in spending from the state budget, cutting funding to 147 programs. The programs most affected are for public education, addressing climate change, and a state Office of Equity.

The largest, $116 million cut, is costing high-poverty schools 370 counselors, despite over a decade of criminal underfunding of public education across the state, during a period of Democrat majority in the state legislature. Another $35 million guts funding for K-12 paraeducators.

Another budget cut eliminates $50 million that was to be used for state projects to address climate change. This is in contrast to Inslee having put forward his 2020 presidential bid as a “single issue” campaign focused on combating climate change.

According to Inslee, “We made a decision of things that we believe could be deferred without injury to people in Washington State. We know that fairly shortly we’ll be back one way or another, and legislators will have a chance to deal with this issue.”

But legislators are clear on what they mean by “dealing with the issue.” Democrat Senator and chief Senate budget writer Christine Rolfes expects the Legislature will hold a special session this year to “make even harder decisions.”

This episode exposes the priorities of both corporate parties, where progressive programs are first on the chopping block in a state that operates as a corporate tax haven for companies like Amazon, Starbucks, Alaska Air Group, and Boeing.

But this is hardly the first time this has happened. In recent memory for many are the hundreds of billions in bipartisan corporate handouts during the last recession, where national lawmakers saved the profits of the banks while millions of working people were made unemployed and faced foreclosure from predatory home loans.

That wasn’t enough for big business in Washington state, however, who were then spared an increase in taxes to make up for loss of revenue since workers didn’t have any to spare. Democrat governor Christine Gregoire, with a Democrat supermajority in the legislature then cut down $9 billion in funding for education, healthcare, and programs for children and the elderly.

It doesn’t have to be like this, where even during a pandemic and economic crisis that’s disproportionately hammering working class families, corporate politicians  strangle public programs while bailing out Wall Street. An independent political party that doesn’t take corporate money, that’s of, by, and for working people would prioritize our needs over the profitability of the billionaire class.

Socialist Alternative is helping to provide an example on both, with member Kshama Sawant on the to Seattle City Council. Sawant is an independent socialist who takes no corporate money and accepts only the average worker’s wage, and she’s leading the movement to Tax Amazon and big business for COVID relief, union jobs, and public housing.