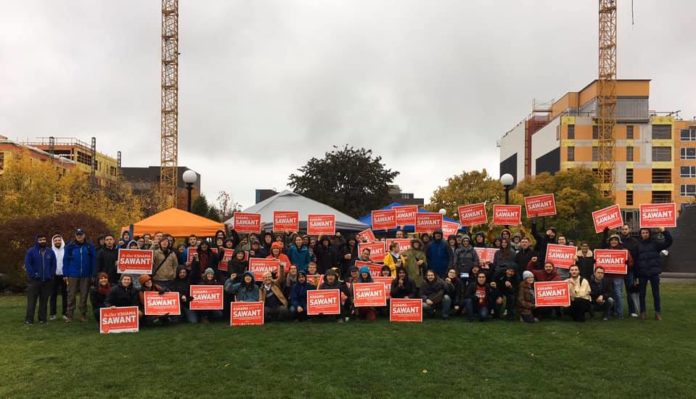 In a historic election, Kshama Sawant, Seattle’s socialist city councilmember and member of Socialist Alternative secured her seat on city council for a third term in office. Kshama Sawant has redefined what it means to be an elected official in Seattle and in the U.S. She has shown that by fighting unapologetically for working people and building movements, we can win victories otherwise thought impossible. This approach has paid rich dividends for workers and marginalized communities: making Seattle the first major city to pass $15 minimum wage, winning landmark renters’ rights victories like the Carl Haglund Law and Move-In-Fee caps, and building a People’s Budget movement to win tens of millions for affordable housing and social services.

Sawant was re-elected on a platform fighting for universal rent control free of corporate loopholes and a Green New Deal, with demands to make Seattle 100% renewable by 2030, taxing big business to fully fund and expand public transit that could be free to everyone, and creating thousands of high-quality union jobs in the green energy sector. And while much can be attributed to Kshama’s tenacity and unambiguous representation of working class interests, our victories are not the product of one individual. Behind Kshama is Socialist Alternative, a revolutionary Marxist organization that has robust internal democracy, acts as a decisive unit, and seeks to bring together any and all movements against inequality or oppression.

The Battle to Re-Elect Seattle’s Socialist

Re-electing Kshama Sawant required an all out battle. Standing up to big business over the last six years to win a $15 minimum wage and pass the Amazon Tax – which if it hadn’t been shamefully repealed would have placed a tax on big businesses in Seattle to fund affordable housing and homelessness services – put a target on Kshama’s back. The Seattle Times and other corporate media as well as business-backed politicians have been fomenting an anti-incumbent mood and anti-Kshama attacks since our election, everything from the refrain of Kshama being “divisive” to blatantly dishonest attacks saying she cancelled half her committee meetings. The corporate establishment wanted us out and threw everything they had against our socialist re-election campaign. Just as had been done before, winning our seat was going to take building a powerful movement in Seattle.

In the final days of the campaign, it was virtually impossible to walk or drive through the district without seeing a poster or yard sign that read “Don’t Let Amazon Blow Up This Election,” “2 Days Left to Vote for the Socialist,” (the posters counted down day-by-day), or “Seattle Needs Rent Control.” With four days until the election we set up tables on every major street and intersection of Capitol Hill, a key neighborhood in the district with a high concentration of voters living in apartment buildings paying exorbitant amounts for their rent. In the final three days we mobilized hundreds of people across the district, including members of Socialist Alternative and other volunteers, to get out the vote: setting up tables and talking to people, putting up posters and yard signs, and going door knocking from the early hours of the morning until dark. On the day of the election, after a final round of doorknocking, we gathered with hundreds of supporters to watch the results come in and celebrate the incredible work of our campaign over the last six months.

The resounding success of the last few days of this historic campaign was the culmination of months of a massive, sophisticated grassroots-organizing effort spearheaded by Socialist Alternative. To win, we knew we had to reach tens of thousands of voters in the district, raise hundreds of thousands of dollars, mobilize hundreds of volunteers, and fight an endless onslaught of attacks from big business and the corporate establishment. With this political objective in mind, we set up a robust campaign apparatus supported by local branches of Socialist Alternative. A small team of dedicated staff was hired by the campaign to work full time, and was organized into a number of teams to coordinate our efforts: the campaign leadership team, finance team, social media team, and field team.

Our campaign leadership was made up of leading members of Socialist Alternative, including Kshama Sawant, who maintained a birds’-eye view of all facets of our work. This team had to keep pace with the political terrain not just in our district, but across the country and world where working class people are moving into action against the billionaires. Our starting point in developing our political program and campaign strategy was an analysis of the central issues facing working people in Seattle alongside the broader political terrain. As we detail in our longer article analyzing the election results, we secured a historic victory by winning the endorsement of the 43rd District Democrats, for whom it was the first time endorsing a non Democrat. This endorsement was not automatic and was the result of hard work of both rank-and-file Democrats and Socialist Alternative members, as well as our campaign’s understanding of the Democratic Party’s deep divisions — with an insurgent left wing looking for ways to push back against the party’s establishment.

Our grassroots campaign did not take a dime of corporate cash because the interests of big business are fundamentally at odds with the needs of working people. This means that our entire campaign was funded exclusively by ordinary working people and young people to whom Kshama Sawant is solely accountable. The hostility from big business towards our movement’s victories and demands was on full display in this election, with corporations from Amazon and Vulcan to Puget Sound Energy and Comcast dumping over $4 million into corporate PACs to elect pro-business candidates across the city. Our opponent in the race, Egan Orion, was one of the biggest recipients of corporate PAC money in Seattle City Council history. However, we broke far more noble records ourselves. We raised $575,000 — more than any city council campaign in Seattle’s history with 7,900 donors and a median donation of just $20!

Our campaign didn’t accept a dime in corporate cash, and our fundraising was rooted in our ability to win ordinary people over to our ideas. With this basis, the campaign finance team trained canvassers in fundraising skills which led us to raising $56,000 tabling and door knocking and organizing 33 house parties that raised $71,300 total.

After Amazon dropped a $1 million money bomb the week that ballots dropped, the finance team pushed hard to raise thousands of dollars to show that ordinary people want to fight back against this blatant attempt to buy city council. Campaign staff and Socialist Alternative branch members took note of the widespread anger that exists towards Jeff Bezos and executives at Amazon. Rather than seeing this $1 million as a death wish, we recognized that it was an issue we could boldly campaign on. We used it as a rallying cry to our supporters in the district and beyond, reminding people what it will mean for the future of Seattle and other cities across the country if Amazon was able to successfully buy the election.

We had the strongest ground game of any campaign across the city, which was only made possible due to our dedicated and disciplined base of Socialist Alternative volunteers. Local Socialist Alternative branches made up of union members, college and high school students, retirees, and working people across Seattle discussed the campaign weekly in their regular meetings. In branch meetings members also discussed tactics and slogans that were proving effective for winning votes on the doors and fundraising, along with key political points to strengthen our overall strategy.

Altogether, over the course of the campaign, we completed more than 8,000 hours of canvassing, knocked on 225,000 doors, spent 2,778 hours phone banking, and assessed the support level of over 23,000 people in the district. Through our canvassing we registered 1,019 people to vote and drove voter turnout to an exceptional level for a non-presidential election year. We led outreach in the Vietnamese and East African immigrant communities. With our partners in the Vietnamese Senior Association we organized a meet-and-greet with over 60 community members that raised $940. We worked closely with a local leader in the East African community who led the charge on registering and mobilizing hundreds of supporters, and received endorsements from many other community leaders. We also registered hundreds of students with a campus drive at Seattle University.

Towards a Workers’ Party

What was possible in Seattle’s District 3 city council race is a small scale example of what would be possible if working class and young people had our own political party, free of the corrosive influence of corporations. Such a party would not be based on backdoor political maneuvering and compromise with big business to incrementally win small concessions that are deemed acceptable by the corporate establishment. Instead, demands like a $15 minimum wage, an Amazon Tax, and rent control could be democratically discussed and working people could fight for what is needed by the vast majority of people in society. Elected officials would accept the average workers’ wage, as Kshama does, and be held democratically accountable to the party and its demands. These elected officials would use their seat to draw working and young people into struggle to get organized and fight for necessary reforms, while continually drawing out the need to fight against the greater system of capitalism in order to end oppression, inequality, and the devastation of the environment.

Socialists are winning elections across the country, which is an exciting development in the growing movement to fight capitalism and win a world based on human need, not profit. Amazon and the corporate establishment in Seattle revealed in this election how far they will go to get a socialist out of office. Working people across the country should look to this election as an example of what we will continue to come up against as the fight against the billionaire class continues, and what it will take to win.