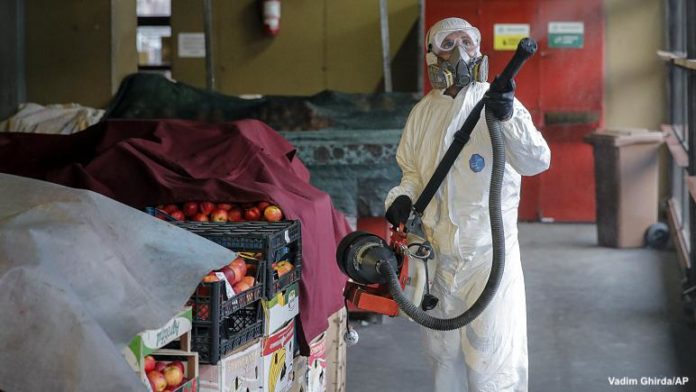 Covid-19 Spreads Eastwards in the EU

The lack of testing for Covid-19 in the newer members of the European Union mean that the number of reported infections are relatively low. Xekinima, the Greek section of ISA interviewed Vlad B. from Mana de Lucru about the real situation in this part of the world.

Xekinima: We see fewer cases of Covid-19 and related deaths so far in Central and Eastern Europe compared to the rest of the EU and, at the same time, a small number of tests conducted, which means that the real numbers may be much higher. What is the real situation?

Vlad: It’s true, these countries are reporting less cases for now: the most recent figures as of April 10 show that the three worst hit countries in the region are Czechia, Poland and Romania. They each have between 5000 and 6000 confirmed cases, and a total of just under 500 fatalities, much less than countries like Belgium and Netherlands, not to mention Italy and Spain.

This is because the pandemic reached this region a bit later, but it’s also due to the lack of mass testing that you’ve mentioned. There is barely any testing available for the medical staff, let alone the wider population. So, the official figures are just the tip of the iceberg. And we are just at the beginning.

Most of the countries in the region, especially Romania, Poland, Bulgaria, Lithuania have high emigration rates. Romania, in particular, has about 2 million emigrants in Italy and Spain. Since the start of the outbreak, many have returned home, and only a few were put into a 14-day quarantine. So, it’s a ticking bomb, really. Now the right-wing president Klaus Iohannis is appealing to the diaspora to stay put and not come home, only a few months after he was praising them all, so as to get their votes.

Xekinima: The underfunded health services across the region, the lack of protective equipment and so on means that the situation can only get much worse. We have read that in Suceava in Romania, the city’s hospital was closed after 100 medical staff contracted the virus. What is the actual state of the health system?

Vlad: Yes, the health systems in this region are chronically under-funded. Official data for 2018 show that, across the EU, average public spending on healthcare as part of GDP is around 7%, which is already too low. But with the exception of Slovakia and Czechia, all the other states from our region fall under that average, several spend less than 5%. Italy spends 7% on public healthcare and look how they’ve been struggling. Imagine how a country like Latvia will cope with this, which only spends 4% of its GDP! On top of that, in Romania alone, hundreds of hospitals were closed as part of the austerity measures introduced in the early 2010s. Austerity targeted healthcare across the EU, it was a criminal policy whose effects are now being completely revealed now.

It must be said that under-funding is the main, but not the only, problem. At least in Romania, hospital managements operate on the basis of what can only be called feudal relations, where authoritarian and often corrupt managers and high-ranking doctors treat fellow colleagues and ordinary patients as their personal servants. It was this abusive management style that contributed to the catastrophic situation in the Suceava hospital that you mentioned. Now the hospital is being run by military doctors, which is just as bad. So massive public funding must be coupled with the introduction of democracy in the workplace, so that doctors and nurses decide themselves how the institution and the wider sector is to be run most effectively.

The way the problem with the hospital management in Suceava was solved reflects how Romanian authorities have been dealing with this crisis: more focus on disciplinarian measures than effective support to the medical sector. We see more restrictions, fines, and police cars loudly playing the national anthem instead of mass testing, protective equipment and ventilators.

Xekinima: Talking about measures, what social and economic measures have been taken so far to tackle this crisis?

Vlad: Non-essential work has been stopped, although the definition of that is subject to wide interpretation. The states are covering part of the wages for workers laid off, ranging from 40% in Poland, with the employers having to match that, up to 75% in Romania, while in most cases self-employed workers are to get a one-off payment from the state.

The repayment of bank loans is postponed on request, without interest, during the state of emergency. In Romania, the Parliament has agreed the possibility to postpone key utilities bills for 3 months. While such measures have some positive elements and give a lifeline to many workers, they are also very limited and fragile. The right-wing, provisional government in Romania has already declared it will challenge Parliament’s decision in the Constitutional Court! Previously, they approved the postponement of rents, but only for companies. This shows that, across the region, governments are primarily concerned with defending business interests, which reflects their political character, ranging from the neo-liberal to the populist and nationalist right. At the same time, they are forced to provide a minimal safety net for working people, while also boosting funding for the healthcare system.

However, these governments have very little material basis to do this for long, not to mention to deal with the longer-term economic impact of this crisis. Firstly, many countries are running high budget deficits already, and access to financial markets is likely to be severely restricted in the coming period. Secondly, the little industry that these countries still have after the mass privatizations of the 1990s is mostly owned by foreign capital. This means that they do not even reconvert existing factories to produce what is necessary to combat the pandemic. For example, the Ford factory in the US is now producing ventilators, while the Ford factory in Romania is laying of its workers. Thirdly, the disruption of international trade will disproportionately affect the economies of many of these countries, such as Czechia, Lithuania, Hungary and Slovakia, where exports account for over three quarters of GDP. In short, these governments completely lack the economic space needed to maneuver with Keynesian type measures, that might be favored in some circles at the level of the EU and some stronger member states.

Xekinima: How do people, the workers and the poor who are the most affected by this epidemic, see all this?

Vlad: The impact on consciousness of this crisis and its socio-economic effects will be huge around the world. Central and Eastern Europe will be no exception. We can already see how the myth of the self-regulating market, propagated for decades, is now being pulverized. The invisible hand is invisible because it simply doesn’t exist. Neo-liberal politicians today cannot defend the principles, that they held as self-obvious yesterday. In particular, people understand the paramount importance of the public healthcare system. If the public healthcare system fails, it’s because it’s poorly funded and poorly managed; if the private healthcare system fails, it’s precisely because it’s private: the goal is not human well-being but profit. The last few months in Romania have seen pressure from the neo-liberal government to accelerate the privatization of the healthcare system, but I think now this is off the table for the foreseeable future.

Many working people can also see more clearly that they are the real wealth creators in society. This crisis may well see a rediscovered working class pride and consciousness. The case for public ownership over key sectors of the economy seems more obvious to many people. As the fundamental contradiction between profit maximization and human needs is coming into full display, we are already witnessing a shift in consciousness that otherwise would have taken years — time is compressed in crises like this.

However, it is important to remember that this impact on consciousness is neither even, nor universal. Some workers might be reaching anti-neoliberal conclusions now, but maybe not yet anti-capitalist or socialist conclusions. Others, by contrast, are moving towards a nationalistic narrative, that each nation is by itself and has to look after its own etc. Most people, though, are at the moment very confused and looking for answers. Where the left is developed enough to provide those answers, to offer an alternative, significant numbers of workers and youth could be moving leftwards in the coming period.

We need to be honest in our analysis and admit that in Central and Eastern Europe such a left is still missing. Hence, the nationalist, protectionist narrative might prevail and be exploited by right-wing forces to consolidate their current power. So, in the short-to-medium term, we may see reaction reinforced. However, these forces will prove incapable of solving the myriad of socio-economic problems that will only intensify as a result of this crisis. This explains the authoritarian measures that some are already taking, such as Orban in Hungary, who is now ruling by decree, or the Polish government, who wants to postpone presidential elections by two years!

But this can only buy them more time. Their lack of real solutions will most likely lead to social turmoil and mass upheaval, pushing consciousness further to the left and creating new opportunities for socialists to intervene and lead the struggle. That’s precisely why it has never been more imperative in recent history for socialists to organize. Our ISA comrades in the region are already doing that, for example by helping to organize a strike committee in the postal services in Poland, which are all the more vital in this period. In conclusion, this crisis will polarize things at all levels. The arguments for socialism will become more crystal-clear, so we need to already adapt to that and be bold in proposing a socialist, democratic and internationalist alternative to this criminal and irrational system.