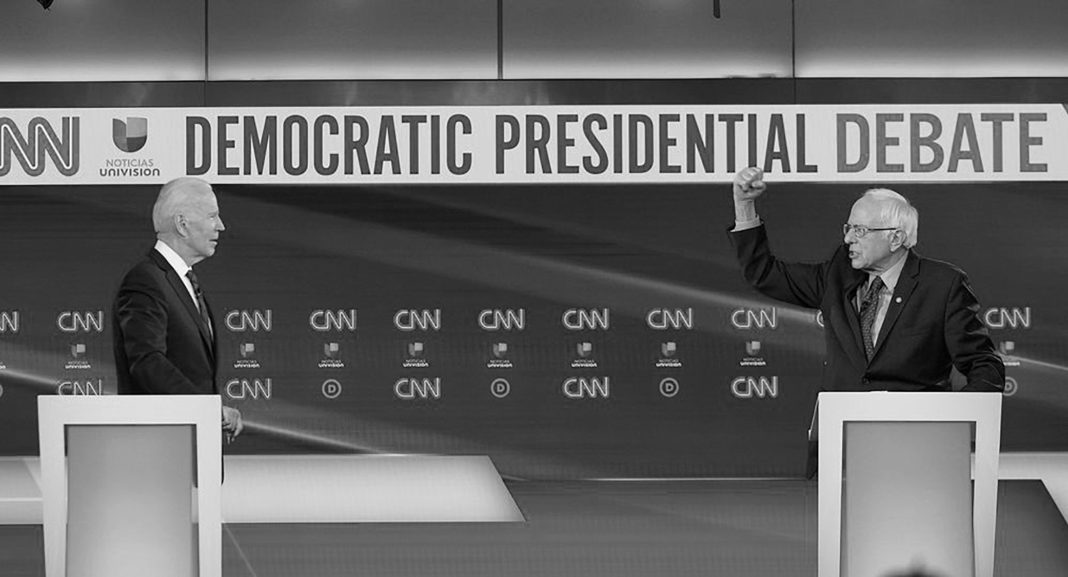 We Need Bernie’s Movement More Than Ever

We live in a time of extreme crisis. The COVID-19 pandemic is reaching every corner of the globe. As thousands of people perish, the world economy is collapsing. Millions in this country are faced with crippling uncertainty for their health, their jobs, their social services, and their loved ones. Yet we have a delusional narcissist occupying the White House who – for crucial weeks – denied the threat we face from the pandemic. What’s the alternative to him being put forward by the Democratic Party establishment? Joe Biden showed his true colors when he said, in the midst of this health crisis, that he would veto Medicare for All legislation if it were to reach him in the Oval Office. Now, Biden’s gone missing in this crisis, and #WhereIsJoeBiden trended on twitter.

We need to learn the painful lessons of 2016 when Hillary Clinton lost the election. Having Biden as Trump’s main opponent would give Trump an opportunity to pose as an “anti-establishment” strong man against a bumbling lifelong politician. We can’t afford to take this risk, and poll after poll shows Bernie would resoundingly defeat Trump. We also can’t let our movement behind Bernie become scattered and disorganized. A fighting movement is needed now more than ever to bail out working people from the double calamity of economic devastation and the pandemic. Tens of thousands of activists in the Sanders campaign need to stay organized and pull together online petitions, workplace solidarity, mutual aid, virtual organizing, and political education that can give us the tools to minimize this crisis and pave the way for fundamental change of the broken system that got us into this calamity.

We need bold leadership for working people in these trying times, and Bernie Sanders should not drop out of this race. We have built a powerful movement together to not only get Bernie elected, but to win Medicare for All, a Green New Deal, tuition-free college, and a society in which billionaires do not exist. This movement would be dealt a blow if Bernie were to endorse the dishonest servant of big business, Joe Biden. Now more than ever, we need a determined struggle to demand socialist policies to address this global pandemic and economic catastrophe facing working people.

Working people face unprecedented uncertainty, a lack of available virus tests, mass layoffs, reduced pay from reduced hours, ongoing workplace safety violations, and the threat of eviction from being unable to pay mortgages and rent. At the very same time, the federal government has given trillions of dollars to billionaire investors, big banks, large corporations and Wall Street.These big business hoarders and price gougers should instead be taxed to pay for working people’s needs, not given this grotesque level of “corporate welfare.”

Socialist truck driver and candidate for Congress Josh Collins initiated a petition calling on governors across the country to provide a moratorium on rents and mortgage payments. Over two million people have already signed on! Now Socialist Alternative is working with others to organize those who signed this petition into a force to fight for the far-reaching relief we need. The same can be done with the vast networks of volunteers that have been fighting to get Bernie into the White House as an “organizer in chief.”

During this crisis, Bernie’s strength has been clear: his videos on how to deal with the pandemic have been excellent and showed some of the bold policies necessary. At the same time, we’ve seen Bernie’s weak approach of refusing to go on the attack against the corporate-controlled Democratic Party establishment. At the March 15 debate, Bernie exposed some of Joe Biden’s most flagrant lies, but this was “too little, too late.” For months, Bernie has been calling Joe Biden his “friend.” This obscures the reality of the situation: Biden is the servant of billionaires, warmongers, and polluters who are hoarding the resources of society. These corporate crooks are the enemies of our health and progress.

In 20 straight primaries, including in states where Biden won by a landslide, exit polls showed that, a majority of people support Medicare for All, and in Texas a majority said they prefer socialism to capitalism! As John Nichols of The Nation put it, “The voters did not favor the centrist stances of the former vice president. They preferred the ‘radical’ ideals of the candidate he was defeating: Vermont Senator Bernie Sanders.”

How did the establishment pull this off? There was a campaign of mass psychological manipulation by every major media outlet saying only Biden could defeat Trump and resorting to out and out red baiting when polls show that Bernie would fare far better against the Predator in Chief. Voter suppression with massive lines in working class communities also helped Biden in some cases. The Democratic Party establishment all united against Bernie with a slew of candidates dropping out to endorse Biden. Elizabeth Warren refused to unite the “progressives” by supporting Bernie, instead having a Super PAC wage a failed last-ditch effort to give her a viable campaign. In reality, the whole primary process in the Democratic Party is rigged against genuine progressive, pro-working-class candidates like Bernie.

Unfortunately, most union leaders refused to support Bernie, the most pro-labor viable Presidential candidate in history. Despite some notable exceptions like National Nurses United and the United Electrical, Radio and Machine Workers of America (UE), most union leaderships either sat out the election or played a bureaucratic role in backing Biden without votes by the members of their unions. Both the leaders of the powerful Amalgamated Transit Union and the National Educators Association said that they conducted a poll of their members before endorsing Biden, but thousands of workers in these unions say that no such poll took place.

This is particularly tragic because our labor unions are at a crossroads. Union activists can provide leadership in this crisis by fighting for all working people against the hoarding, price gouging billionaires who profit from our misery. If we fight back and organize with a class struggle approach, then we can win safer working conditions, hazard pay, and more resources to address the pandemic. On the other hand, if we try to snuggle up to the ruling class and beg for the diminishing crumbs that fall from their table, then the COVID and economic crises will only deepen.

Where Should We Go Now?

Now, instead of putting our organizing efforts behind Joe Biden, we need to show socialist leadership and help lay the basis for a new party that fights unambiguously in the interests of working people. We hope Bernie will join us in this effort. The desperate situation cries out for a working-class movement that stops at nothing to break the power of the billionaire class.

Four years ago, when the DNC was handing the nomination to Hillary Clinton, Socialist Alternative initiated a petition for Bernie to run all the way to November and launch a new party. Over 140,000 people signed this petition to continue a strong working-class movement. If he would have taken our advice, then Bernie could have defeated Trump and Hillary both in 2016. Even if Trump were to have won in 2016, a new party could have been an organizing center against the agenda of the right wing and the billionaire class. This would have helped us win more victories against Trump’s agenda and could have put us in a position to defeat him now without having to go through the rigged Democratic primary.

Right now, people are extremely worried for our loved ones, health, and economic livelihoods. Together, we can organize for the relief we so urgently need and build the movement in our workplaces, communities, and campuses to fight for a world with rational, democratic planning rather than the profit-driven misery of capitalist crisis.