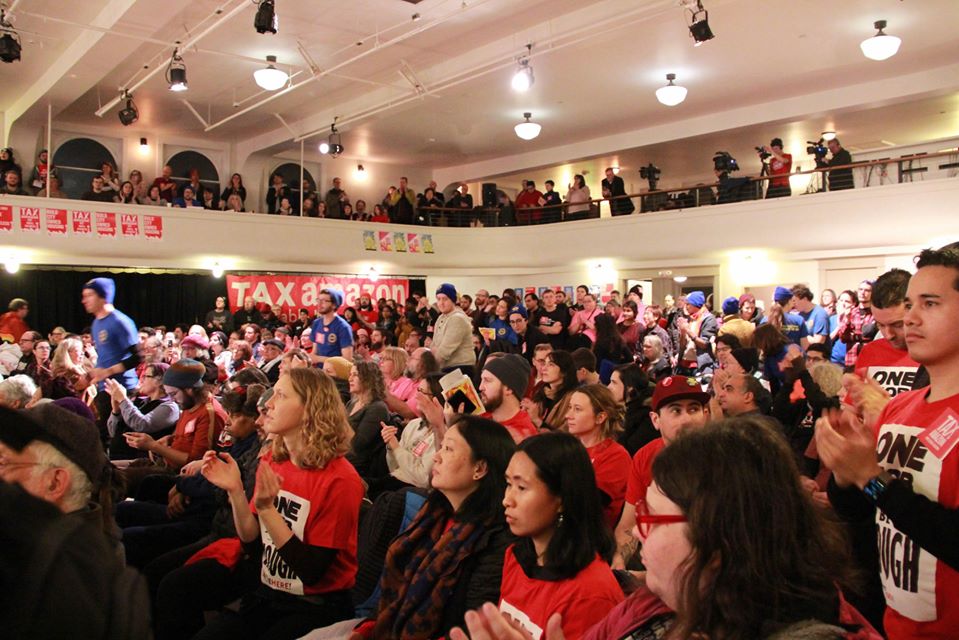 In an electrifying rally on January 13, 500 people rallied to celebrate Councilmember Sawant’s inauguration and launch the Tax Amazon campaign. In addition, a poll taken shortly after the elections showed 75% support for taxing Seattle’s biggest business. The mandate to Tax Amazon could hardly be stronger. We need to strike while the iron is hot, which is why we are preparing the ground for a powerful Tax Amazon struggle in 2020.

As we enter a new decade, millions of working people are looking to fight back against the wealthy elite who are destroying our lives and our world for their own mega-profits. Since the 2008 financial crash, a period of record-long economic growth has made those at the top richer than ever, while almost half of all Americans work low-wage jobs. Inequality is now at the highest level ever recorded in the United States.

While billionaires like Jeff Bezos and Elon Musk fritter away billions on space games, the time is ticking to enact real solutions to deal with the astronomical threat of climate change. At the same time, Bernie Sanders’ campaign, with the call that “billionaires shouldn’t exist,” has inspired a record-breaking number of grassroots donations from working people across the country. There is a historic opportunity for Seattle’s Tax Amazon 2020 struggle to point the way forward.

Inequality is particularly stark in the corporate tax haven of Seattle, a city in a state with the most regressive tax structure in the entire country. The Seattle metro area is home to the two richest men in the world (Bill Gates and Jeff Bezos), as well as the nation’s highest homeless population per capita. Seattle has been the construction crane capital of the U.S. for four years running, but of an estimated 31,000 new market-rate apartments opened from 2008-2017, 92% were luxury units. As for-profit developers and big corporations like Amazon rake in record profits, working people are rapidly being priced out of our city.

On the heels of a City Council election in which working people defeated Amazon’s attempts to steamroll in their corporate candidates, there is powerful momentum for a strong tax on Seattle’s biggest corporations to fund a major expansion of social housing — publicly-owned, high quality, affordable, green and energy-efficient homes for working people, built by union labor. Like rent control, social housing has played a key role in providing a lifeline of housing stability and affordability where it has been won. Energy-efficient housing for workers near the city center is also a key part of a Green New Deal with the potential to dramatically reduce emissions caused by long commutes and outdated, inefficient home heating and energy systems.

Lessons from Past Struggles

Some argue that we should not call for an “Amazon Tax,” saying that this will provoke a backlash from big business that could confuse ordinary people. But we must be absolutely clear: Seattle’s biggest businesses will fight tooth and nail against any form of progressive taxation, as they always have ー we won’t pull the wool over Jeff Bezos’ eyes simply by calling it by another name! Our job is to make it as clear as possible what we are calling for ー not another regressive tax on working-class families, but one exclusively aimed at giant corporations like Amazon. The recent election results in Seattle and the massive support for Bernie Sanders’ campaign prove beyond a shadow of a doubt that working people are inspired to fight by bold, audacious demands rather than an approach of “playing nice.”

We should have no doubt that corporate politicians will aim to release the pressure valve of our movement’s momentum into a watered-down, weakened plan.

During the first round of our Tax Amazon struggle in 2018, Seattle Mayor Jenny Durkan ー elected on a record sum of corporate cash from Amazon ー and other corporate-funded politicians whittled down the tax from the original demand of $150 million to an eventual $48 million on the grounds that the smaller tax would be more palatable to big business. However, both sums would essentially amount to pocket change for billionaires like Bezos, and the reduction did nothing to prevent them launching a massive opposition campaign. Jeff Bezos threatened to move 7,000 jobs from Seattle to Bellevue, and the corporate media whipped up fears about a “tax on jobs.” Many politicians and organizational leaders framed it as the “Employee Hours Tax” or “head tax,” playing right into the fearmongering. And when big business launched a ballot initiative to repeal the tax, instead of fighting back, the City Council majority (with just the exceptions of Councilmembers Mosqueda and Sawant) rapidly caved. We cannot let these mistakes be repeated.

We start out 2020 with Seattle’s corporate elites bruised and Bezos’ aggressive bullying tactics blatantly exposed. Amazon’s attempts to buy Seattle’s elections this past year completely backfired, with their top target, socialist Councilmember Kshama Sawant, surging to a decisive victory. After working people in New York defeated a $3 billion handout for Amazon’s HQ2, Amazon announced that they were moving to New York anyway (as they clearly had needed to do all along), highlighting the hollowness of their attempted extortion. The backlash has even spread globally, with recent protests in India against Bezos’ plans to take over the country’s e-commerce market.

Jeff Bezos won’t easily accept another loss. The record-breaking $1.5 million which Amazon single-handedly dumped into Seattle’s elections was just a preview of how far Amazon and Seattle’s most powerful corporate titans will go when their profits are directly on the line. They recognize that a victory for a strong Amazon Tax would reverberate internationally, inspiring working people to demand more.

Some may wonder whether focusing our demand on Amazon will antagonize the over 50,000 Amazon workers in the Seattle region, or the millions of ordinary people ー75% of all online shoppers ー who regularly shop on Amazon because it is cheap and convenient.

We should always be careful to be clear that we are on the same side as Amazon workers and shoppers. When Amazon dropped $1 million in the final weeks of the 2019 Seattle City Council race, it was tech workers ー many of them Amazon workers ー who led the surge in grassroots donations to Councilmember Sawant. It was also Amazon workers who organized a protest at the Amazon spheres against Bezos’ money bomb.

We must base ourselves on the question: what will inspire thousands of working people to get active? How can our struggle win? Both in Seattle and nationwide, working people feel that it’s time to finally make billionaires pay. As we saw at the powerful Tax Amazon 2020 launch, there is the potential to galvanize a powerful fightback against the domination of big business with a bold demand to tax Amazon and big business.

What Strategy for our Movement?

Councilmember Kshama Sawant’s office and Socialist Alternative are bringing together Seattle’s most fighting unions, community, progressive, housing and environmental justice organizations around a fighting strategy to Tax Amazon. Councilmember Sawant’s office is preparing legislation for an Amazon Tax in Seattle that the City Council could either pass as an ordinance or put on the ballot for a vote in November. But we absolutely cannot afford to put our faith in the political establishment. That’s why we are also immediately preparing to file a grassroots ballot initiative in February, which could be put to the November ballot if the City Council fails to pass a strong Amazon Tax. This strategy was successfully used to win the first $15/hr minimum wage in a major US city in Seattle in 2014.

In San Francisco, working people just won a $300 million annual tax on big business. With the powerful momentum for our Tax Amazon 2020 struggle, we should aim at something much larger than 2018’s $48 million tax, in the range of $200-$500 million. King County estimates that $480 million is needed to address the housing crisis, and we should fight for the largest tax which we think we could win at the ballot. And while most working people are not concerned about the wonky particulars, the decision of which tax mechanism to use should be based on ensuring a tax only on Seattle’s biggest businesses, NOT small business. Starting on January 25, we plan to organize a series of grassroots democratic conferences to discuss different proposals for our tax and organize the fighting strategy needed to win.

Almost daily it seems that new reports surface of the horrific conditions for Amazon warehouse workers and delivery drivers. But we’re also seeing an inspiring wave of Amazon workers moving into struggle, from successful unionization efforts in Amazon warehouses, to Amazon tech workers joining the Climate Strikes and standing up against U.S. militarism and surveillance with the #TechWontBuildIt struggle.

Amazon and the logistics industry have transformed the economic landscape. They offer a glimpse of what is possible with large-scale planning. But conveniences like next-day delivery don’t have to come at the expense of workers and the planet. A socialist society would achieve greater efficiency with a democratically planned economy, but on a sustainable and humane basis, to transform the world for the better.