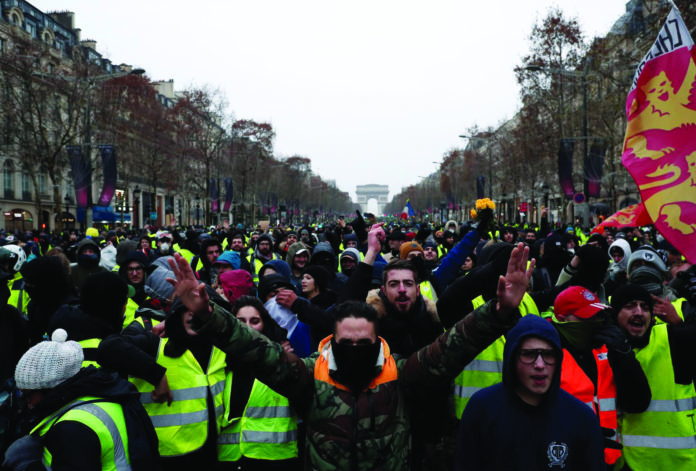 For 46 uninterrupted days that included the winter holidays, France was crippled by strikes in sectors from transit to lawyers as workers fought back against President Macron’s pension “reform” which aims to make people work longer and receive less in retirement. French workers see their pension system as a key historic gain which has ensured one of the lowest levels of poverty among the elderly in the world.

While some public transit is returning to normal schedules, they will be shut down again soon as workers prepare to go back out as this movement has not ended. In mid-January, the Macron government declared it would temporarily suspend one of the key contested measures in the plan, which would raise the pension eligibility age from 62 to 64, but workers are still angry. Unions and workers plan to continue to protest until the entirety of the Macron government’s plan is withdrawn.

Beginning on December 5, 2019 with a protest of 1.5 million, hundreds of thousands of workers across France have been on strike or have joined protests to oppose the pension reform project. The strikes were originally initiated by railway and transit workers, but more workers, including teachers, nurses and health-care workers, and other public-sector workers have since joined.  Transit workers have effectively put a halt to most train and bus services. The transit strikes have put an extreme financial burden on the government, costing over €600 million. Each sector and union have been organizing their strikes separately, the next strikes will be stronger if planned together.

After over 50 days of strikes, this movement now represents the longest running strike action since the historic strikes of May 1968 and the culmination of opposition to Macron’s pro-big business reforms. When the strike ran into the Christmas holiday season, the strikers remained steadfast and continued through the holidays and into the new year.

During the holidays, Macron attempted to lay blame on workers for decreased train service for those traveling to visit family, but this failed to dampen the mood of struggle against Macron’s government. 54% of the population expressed support for the strikes even at the height of strike action over the Christmas holiday season. In a January 14 Harris Poll, 60% of the population indicated support for the strikers.

The reforms proposed by Macron’s government and the current Prime Minister Édouard Philippe would establish a point system for workers that reduces the current pension system to one category. The most egregious of these reforms, and the provision that Macron has said he would remove, is the attempt to “reward” workers who hold off an additional two years to retire at 64 years old instead of 62. Strikers in France fear that the implementation of this system will lead to a private pension system similar to the one in the United States.

Like in many countries, the government has claimed the pension system is in a huge deficit and that the current reforms are only an attempt to fix the system and balance the budget. Macron has stated that the reforms are simply a necessity to modernize a system that is increasingly under pressure from higher life expectancies, and that the protests simply stem from a discomfort with any kind of change. Macron said to reporters, “We never like change…There were always strikes, and there always will be on this subject.”

Meanwhile, productivity in French industry has risen, French profits are at a record high, and French dividends paid out last year were the highest in the world – $51 billion. While the current proposed reforms punish workers who have contributed their own wages to the pension system, big business has for years increased their own profits by taking advantage of loopholes that permit them to avoid paying pension fund contributions. The Macron government claims a current €3.5 billion deficit in the pension system, but these loopholes led to a loss of €66 billion in 2019 alone and €9.8 billion for the health insurance fund for elderly people.

Since Macron’s inauguration, he has gained a reputation as a president of the rich. These pension protests have put a larger spotlight on the intimate ties between Macron’s government, big business, and finance capital. A large private investment firm managing €24.7 billion of French funds, BlackRock, has especially advocated for the pension changes. The chair of U.S. finance giant BlackRock’s French division, Jean-François Cirelli, was recently nominated by Macron to receive a “Legion of Honor” medal. This move by Macron was seen as a provocation to the movement because of BlackRock’s enthusiastic support for the pension reforms. In response, workers have occupied the headquarters of BlackRock to expose the capitalist interests of the pension reforms.

The unions and student unions have rightly called for the movement to continue. They defend the holding of general assemblies in workplaces to continue and expand the mobilizations. This dynamic must be used to build a genuine and unified general strike that is democratically discussed and agreed in every workplace. In such a movement, the aim of withdrawing the pension reforms should be just the beginning. If a sufficiently strong movement can be built, the fall of the government of the rich would be on the agenda.

In addition to organizing the struggle, the general assemblies must become forums to develop a broader set of demands based on: an increase of salaries and social benefits, an end to precarious work, an end to unemployment by reducing the working week without loss of pay and with the reallocation of the newly created jobs, massive investments in public services accessible to all throughout the country and the expropriation of those companies that resist the introduction of such a program to place them under the democratic control and management of the workers.