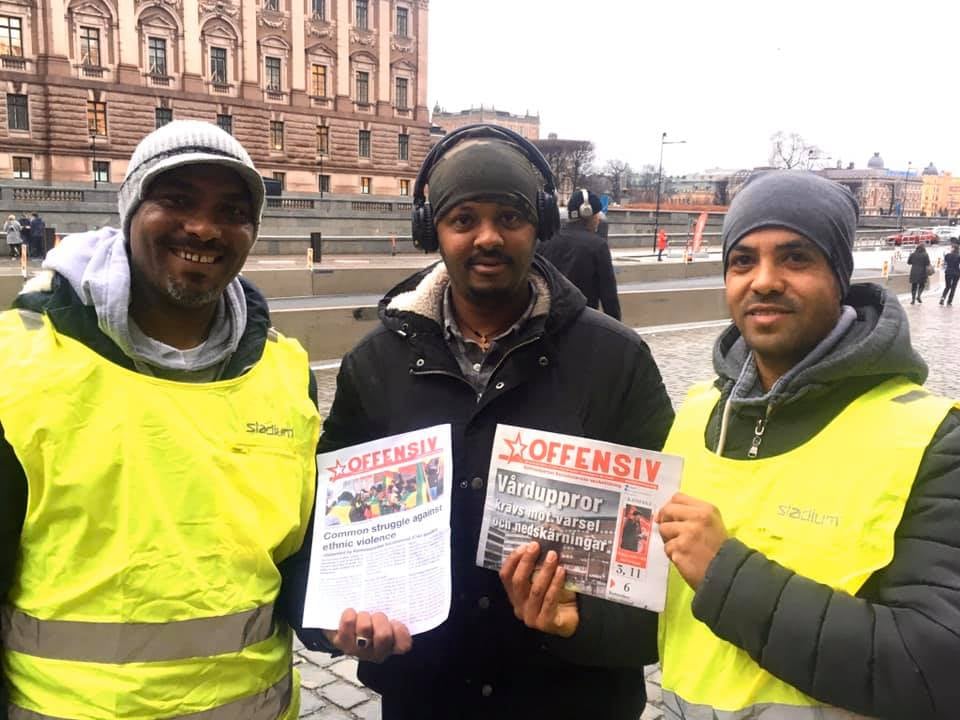 The new wave of ethnic violence in Ethiopia has to stop. In one week in October, more than 80 people were killed by mobs instigated by Jawar Mohammed.

The violence is another sign of the need for a united and democratic mass movement from below to overthrow the old regime that is still in power, but with a new face.

It is more and more clear that coming to power of Abiy Ahmed in April 2018 was an attempt from the ruling EPRDF and its main component TPLF to stop growing mass protests and discontent.

Their methods of mass repression – tens of thousands arrested and named as “terrorists” – and election fraud could no longer stop mass demonstrations and even strike movements. The strong economic growth of Ethiopia only benefited a small elite, plus multinational companies and foreign dictatorial states (China and Gulf states). The mass of the growing population still lives of subsistence farming. There are three million internal refugees.

In April 2018, Prime minister Abiy Ahmed was presented as real renewer. Releasing political prisoners, inviting banned parties, the deal with Eritrea, mass meetings that promised real change. In the West – Sweden and Norway not least – he even was so praised that he received the Nobel Peace Prize, to be delivered on coming Monday, 10 December.

Economically, Abiy Ahmed’s politics are not going to solve growing problems – and not going to assist poor mass of the population that needs food and money. He wants to privatize Ethiopian Airways, Electricity, Telecom, railways and more. That is inviting multinational companies to rob Ethiopia and exploit workers even more. He has also connected stronger to Gulf States, especially be taking loans from the United Arab Emirates, with which he has strong links.

Regime change is not enough

In many demonstrations of Ethiopians in Sweden, against the EPRDF and against deportations of political refugees, we from Rättvisepartiet Socialisterna have explained that “regime change” is not enough. This is particularly the truth when the “new leader” comes from within the old regime. Abiy’s attempt now, to form a “new party”, the Prosperity Party, is just a new name for old parties, even the the TPLF has not joined.

Real change must come from below, from democratic organizing of the working class and the poor. It need mass struggles, such as we see in many countries today. They are an inspiration for all oppressed. Dictatorships in Sudan and Algeria has been overthrown this year. In Sudan, there is strong distrust against the deal between some leaders and the military to share government.

Learn from Egypt and Tunisia

In Egypt in 2011, the military and the capitalist were left untouched after the overthrow of Mubarak. It gave general al-Sisi the possibility to establish a new dictatorship. The military and the old regime must be totally purged and punished, that is the lesson from Egypt. From the struggles in Tunisia, we can learn that trade unions can halt the worst counter-revolution.

Today in Ethiopia, democratic defense committees must be organized against the mobs instigated by Jawar Mohammed. Ethnic chauvinism and violence must be condemned. Addis Abeba belongs to all Ethiopians.

This is not going to happen from the regime. They rather excuse the violence as “fighting from both sides”. They also exploit the fear of violence in order to stop united protests.

Abiy Ahmed has failed, there is need of a new democratically organized party for workers and poor countryside population. To fight for real change of political and economic power, to secure rights for all ethnic groups. That demands an overthrow of the old regime, capitalism and imperialism in Ethiopia – for democratic socialism to be established.

A Socialist Program for Ethiopia

The movement and the struggle

The economy and welfare