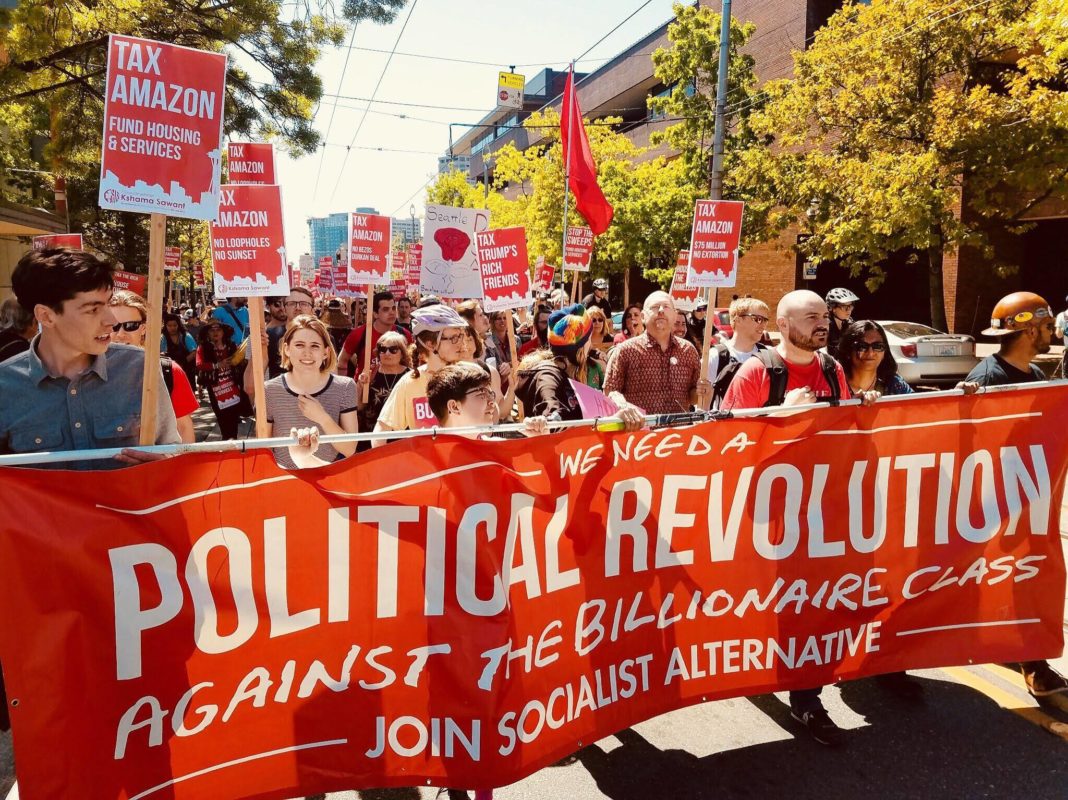 Workers all over the country are facing extremely low wages, poor health care, housing that we can’t afford, and child care costs we can’t keep up with. Without our labor, no store, company, or organization could function – yet we are still the ones that wind up struggling every day while the bosses get richer. With Trump in office, the climate crisis, and growing levels of inequality – millions of people are growing tired of politics and business as usual. Socialist ideas are on the rise as ordinary people look to challenge capitalism.

Socialist Alternative is a Marxist organization that fights for every reform possible but recognizes that capitalism by its very nature must produce inequality, racism, and sexism. We see the multiracial working class as the key force for change. We argue for the establishment of a socialist system where key sectors of the economy are under the democratic control of working people and we can set society’s priorities based on human need not profit.

In order to achieve fundamental change, Socialist Alternative believes it’s critical to build and strengthen the collective power of the working class today and to unite all struggles of the oppressed into a common challenge to the corporate elite.

What Do We Do?

In 2014, Socialist Alternative member Kshama Sawant became the first socialist to win a city council position in Seattle in 100 years. Kshama has used her position to assist the struggles of working people, including leading the fight to win the nation’s first $15 an hour minimum wage, historic tenants rights laws, and a tax on Amazon to fund affordable housing (though this was later repealed due to Amazon’s bullying). This year, we’re fighting to get Sawant reelected against the direct political and economic power of Jeff Bezos and Amazon executives who have made absolutely clear they want “anybody but Kshama.”

As socialists, we participate in labor battles across the U.S. including the recent teachers strikes, most notably in Oakland, where we played in important role in building parent and community support for the strike. We have members in important positions in several unions across the country including nurses and bus drivers as well as members leading organizing drives in a number of workplaces across the country. This year in Massachusetts we played an important role in the inspirational 11-day strike of Stop & Shop workers. Socialist Alternative members worked in lock step with the workers to organize strong picket lines, stop delivery trucks, and hold “mega-pickets” with community support.

Socialist Alternative sees the fight against all forms of oppression as a critical component of the overall fight for the socialist transformation of society. After the 2018 nomination of predator Brett Kavanaugh to the Supreme Court, we issued a call for demonstrations in a number of major cities. We went on to lead marches and protests against his appointment and gave speeches connecting this struggle to the need for overall system change.

Our approach to building a democratic yet disciplined organization allows us to often play an outsized role in social struggle compared to our size. We seek to root ourselves in the day to day reality of the working class. We discuss with our neighbors, coworkers, classmates, etc., sharing our newspaper and getting a sense of what the key issues are that people are willing to fight back on.

We engage in extensive discussion on political and economic trends at both local and national level. We seek to bring the lessons of the history of the labor movement and social struggle to bear in the material we produce. Our goal is to help point the way forward to victory while in constant dialogue with ordinary people. Through proving the value of our ideas in action we seek to win more people to our ideas.

While we have full discussion within the organization, without action that discussion is meaningless. Our discussions lead to decisions which are implemented in a united way. It’s this process of discussing things out and then acting quickly that allowed us to organize successful “Mega Pickets” during the Stop & Shop strike which forced the company to keep a handful of stores shut during what is usually one of the most profitable days of the year, the day before Easter.

Socialist Alternative is an organization of workers from all over the country – linked to other socialist organizations around the world – who think we need a new system. A socialist system would guarantee high quality housing, health care for all, free universal childcare, and make decisions in society and in the workplace democratically.

Working people need our own political party to bring our movements and struggles together and give them the strongest expression on the streets, in the workplace, and on legislative bodies. We cannot rely on parties that are tied to and serve corporate money. We need a party of working people that has democratic debates about how best to win health care, education, and jobs for all.

We are fighting nationally against big business, the far-right, and capitalism – for a socialist alternative based on the democratic control and decision-making of the working class. We believe in the power of the working class to usher in a society that works for all working people, not for multi-billionaires.

If you agree with what Socialist Alternative stands for – join us!