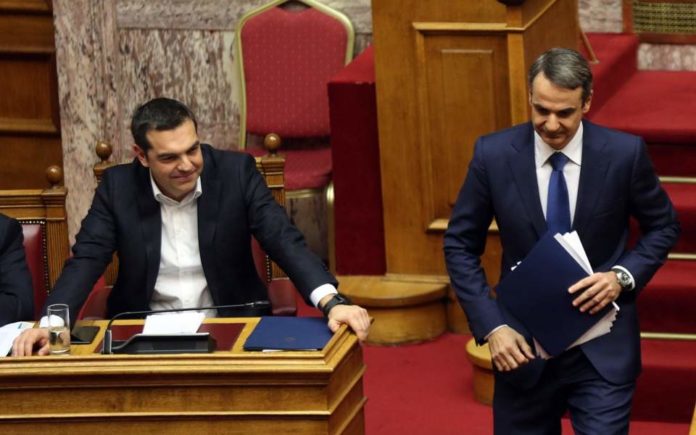 There were no surprises in the results of the July 7 elections in Greece, they confirmed the trends that were already evident in May’s Euroelections: Greece’s traditional right-wing party New Democracy (ND) was the victor, SYRIZA’s support fell as voters punished it for its austerity policies, the Left remained weak having failed to persuade workers of its positions and the neo-Nazi Golden Dawn (GD) lost its parliamentary seats unable to get the threshold of 3% demanded to be elected into parliament. There was a historically high abstention rate of around 45% (similar to all elections from September 2015 onward) – i.e. almost every second person did not bother to vote.

We are now entering a new stage of bipartisanism (polarization between two main parties, replacing each other in government) which however differs from the one that existed between ND and the social-democratic PASOK in the past, in the sense that it has neither the depth not the stability of the old two-party system.

ND won the elections with 39.8% and 2.2 million votes. The increase in its vote may seem large in comparison to that it received in the September 2015 and recent European elections, when it received about 1.5 million votes. However, this result must be judged in the context of the new landscape of “normality” established by SYRIZA.

The three “memorandums” imposed on Greece by the Troika (the European Commission, the European Central Bank, and the International Monetary Fund) from 2010, led to the collapse of the “old” two-party system in Greece, as voters turned their backs to the hated political forces (ND and PASOK) that had ruined the country and left it in a deep economic crisis and extreme austerity. SYRIZA grew in this period from 4% to over 36% to be elected in government, because of its opposition to these policies. But since the summer of 2015, when SYRIZA capitulated to the demands of the Troika and implemented the very same austerity policies it had earlier rejected, the bipartisan landscape reemerged, with ND on the one side and on the other SYRIZA taking on the role of PASOK.

However, in this election, ND received nowhere near the number of votes it gained before the crisis. Although it managed to reach the level of the 2009 early elections (2.2 million votes) when the crisis was on Greece’s doorstep and the ND government fell before the end of its term, this is far from the number obtained in 2007 – 3 million votes.

At the same time, it is important to emphasize that ND did not develop any enthusiasm in society, nor did it win any significant number of votes from those who voted SYRIZA in 2012 and 2015. The increase in electoral support is basically due to the collapse of the votes of the smaller nationalist-right and center-right parties such as the “Independent Greeks” (ANEL), “To Potami” (“The River”), and the “Union of the Center” which between them received 500,000 votes in 2015. And, of course, ND took part of the 200,000 votes lost by “Golden Dawn.”

SYRIZA lost the election because it failed to convince workers that its policies differ fundamentally from the policies of ND and was therefore unable to develop any social dynamic. However, because a large part of Greek society – and particularly so in the working class and the poor– is still fearful of the tough neoliberal agenda of ND’s leader Kyriakos Mitsotakis, SYRIZA still managed to keep a significant vote, receiving 31.5% and almost 1.8 million votes.

But it is already clear from Tsipras’ statements since the election that SYRIZA’s leadership does not recognize any serious errors in their politics. Instead, it is moving on to become integrated into the system by occupying the “center-left space” with the “transformation of SYRIZA into a great democratic party” (to use Tsipras’ expression) that is, to occupy the position of the traditional social-democratic party, PASOK.

Nazis Out of Parliament

The most positive development of these elections is the failure of the GD, the neo-Nazi gang, to remain in Parliament. The argument of the leadership of GD that it is a “big party” supported by “almost 10% of the Greek people” is undermined and politically weakens them. Their failure to enter parliament deprives them of the protection of parliamentary status and state funding and the employment by the state of tens of their leading cadre to provide “parliamentary back up.” The neo-Nazis lost about 100,000 votes even compared to the European elections that took place just over a month ago!

This development is obviously due to a number of factors, but what we’d need to emphasize here is the role played by the constant mobilization of the anti-fascist movement that revealed the real nature of this murderous gang, as well as the on-going trial of the main leaders of GD on charges of murder and other crimes.

Although we must of course welcome this important development, we must be aware that the struggle against fascism does not end with this blow against GD. Now we need to intensify our efforts and our campaigns not just to get harsh convictions (life sentences) against the leadership in court but also to smash their support in every neighborhood where they have a presence.

The “Left” King is Naked

The left – mainly the Greek Communist Party (KKE), the anti-capitalist left ANTARSYA, and Popular Unity (LAE) – once again proved unable to express the needs of the working class and the poor.

The KKE saw another small decline in its vote compared even to the Euro elections of May, staying essentially stagnant at 5.3%, despite their efforts for a very dynamic election campaign and despite the fall in SYRIZA’s support. Popular Unity has continued on the road to its own self-annihilation, receiving only 16,000 votes, a mere 10% of the votes it received in September 2015 and just half of those it obtained in the European elections just over a month ago. ANTARSYA received a poor 0.4% and 23,000 votes, again halving its vote since 2015 and lower than the 36,000 obtained in May. The remaining left-wing lists got less than 0.1%.

The left leaders, rather than reflecting on the causes of this electoral defeat, are again trying to put the blame on the people. Dimitris Koutsoubas, general secretary of the KKE, said, characteristically in his post-election statement, that there is “a general conservative tendency.” He was joined by Popular Unity which announced that “a conservative political shift is being recorded.” In previous articles we have explained why we disagree with the analysis that there has been a “conservative shift of society” adopted by almost all the left parties after the European elections.

The left also has to reflect on the fact that “MeRA25”, the party set up by the former SYRIZA finance minister Yanis Varoufakis increased its vote and gained seats in Parliament (3.5% and 9 MPs). “MeRA25” is a party positioned between the left and Social-Democracy and does not specifically call for social change or for socialism, yet it managed to convince a section of society of its positions on specific issues where other left forces could not. The success of “MeRA25” appears to offer some hope and a way out of the impasse and frustration felt by many on the left, as Varoufakis is considered to be the only one of those around Tsipras who did not betray after the 2015 referendum. Within the spectrum of the anti-memorandum forces the results of “MeRA25” are the only positive development.

The nakedness of the leaders of the mass and semi-mass left can no longer be hidden. What is needed is an open and in-depth discussion within the revolutionary left and with the wider movement to discuss the mistakes and deficiencies, to overcome the dominant “culture” in which left organizations refuse to cooperate with each other, to put forward a transitional program with radical demands for system overthrow, not as abstract revolutionary calls but directly linked to the current phase of the movement, its needs and consciousness. We need, at last, to create a broad left front on the above lines, that can give voice to the working masses and show the way forward.

In the coming period, attacks on workers’ and people’s rights will intensify, especially as a new global economic recession is approaching. The healthy forces of the left, fighting unions, working-class activists and local and other protest movements must be drawn into the battle to rebuild the movement and the left, so as to be able to face up to the tasks of the next period.