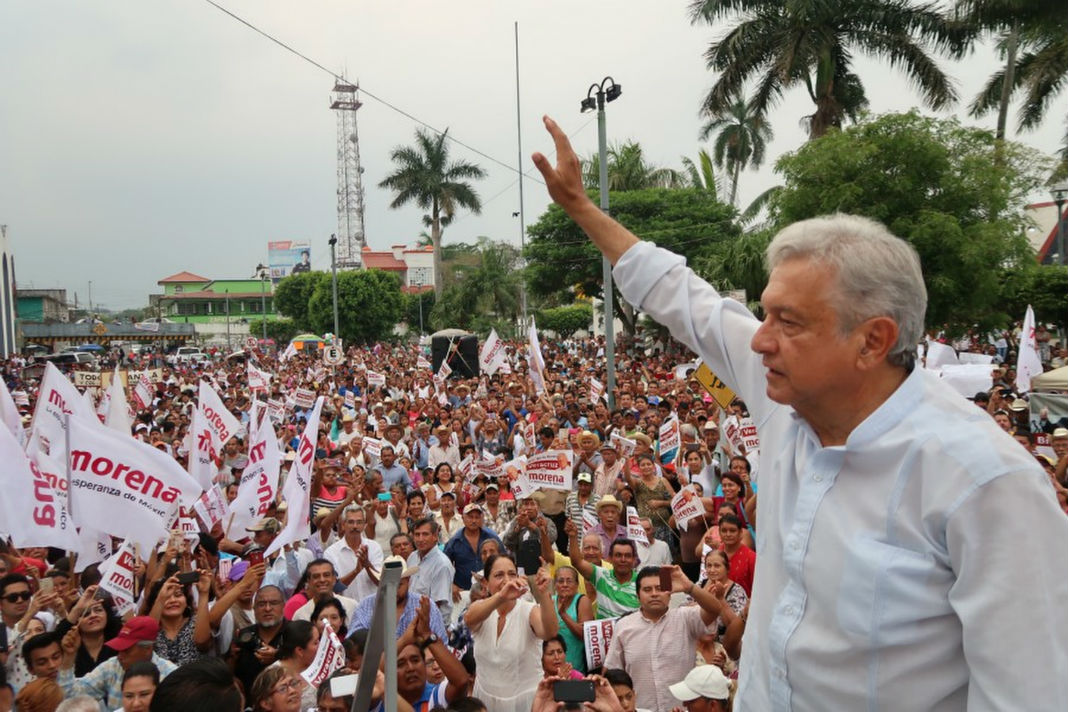 Voting Is Not Enough, Build from Below for Real Change

This article is based on reports from Izquierda Revolucionaria (Revolutionary Left) part of the Committee for a Workers International with which Socialist Alternative is in political solidarity.

2018 is shaping up to be a transformative year for Mexico. The July elections are taking place against a background of economic stagnation, mounting poverty, inequality and violence. There is mounting wave of anger and disapproval of the traditional parties of the establishment (the PRI and PAN) among young people and broad sections of the masses. For the first time in the history of Mexico, there is the possibility of a government of the Left.

This is taking place against the background of instability in the world economy, the return of economic nationalism and authoritarianism, social and political polarization, and erosion of the legitimacy of the institutions of bourgeois democracy across the globe.

The Mexican economy has grown between 2.0 and 2.5% over the past decade and the outlook for 2018, according to the IMF, is for GDP to grow only 1.9%. The “structural reforms,” far from increasing investment, growth and jobs as they were supposed to have actually led to stagnation. The working class and the most impoverished sections of
society have seen the price of fuel and other necessities increase while wages stagnated or decreased.

The political situation is one of polarization, instability, and volatility. The working class has faced continuous attacks by the Peña Nieto government of the PRI with privatization of important sectors such as oil and electricity, and budget cuts in health and education. In response to this offensive, mobilizations, protests and revolts developed
against the price of gas (the “gasolinazo”), against drug trafficking through the organization of self-defence groups in different towns of the country, for the rights of indigenous peoples, water rights.

There are also strikes in the maquiladoras in the north of the country and the heroic struggle of the teachers of basic education (CNTE). Right now important industrial struggles are taking place across the country with workers fighting for better wages and to create new unions independent of the state controlled federation CTM.

The systemic violence that women suffer in Mexico is now an epidemic that reflects the terrible degradation of Mexican capitalism: seven women are murdered every day and this number continues to increase. The increasing mobilizations of the women’s movement reflects the degree of radicalization that is taking place especially among
young people.

One of the most outstanding struggles of the last period was in Mexicali, where the inhabitants of that region mobilized in what became known as “the war of water”, against the U.S. brewer Constellation Brands. The
struggle managed to prevent the construction of the brewery.

Most of these mobilizations have had a semi-spontaneous character, and have been based on self-organization, going beyond the traditional organizations of the working class and the left. The big independent unions, like the National Union of Workers (UNT), as well as MORENA (National Regeneration Movement), have not made any serious calls to fight back and as a result the protest movements from below have had an explosive character over the past period.

Despite repression, setbacks and defeats of the movement at the hands of the government of Peña Nieto, the PRI government has failed to stabilize the situation of Mexican capitalism: the workers and peasants are not paralyzed and now the Mexican ruling class faces the prospect of serious electoral defeat.

MORENA and the Elections

Andres Manuel Lopez Obrador (known as AMLO in Mexico) and the MORENA party (National Regeneration Movement) are ahead in the polls. The masses identify Lopez Obrador and MORENA as political forces of the
left that can change the current horrible situation. Millions of workers, poor peasants and young people, see the possibility of defeating the PRI government. Izquierda Revolucionaria supports the struggle to defeat the right
wing and the establishment parties in these elections.

MORENA, however, is a cauldron of internal conflicts and contradictions. On the one side there is a reformist and bureaucratic leadership that leans more and more in the direction of the ruling class and is not willing to break with the logic of capitalism. On the other, there is the radicalized social and electoral base of MORENA (mainly workers
and peasants) who do not forget the electoral fraud and stolen elections in 2006 and 2012 and want to turn the party into an instrument of their struggle and defeat the ruling elite. Despite the struggles that have taken place across Mexico, Lopez Obrador has not called for mass actions in solidarity with them or to unite the movement. Furthermore, Lopez Obrador has made concessions and conciliatory moves seeking to reassure the ruling class and the capitalists.

The leadership of MORENA has increasingly abandoned social struggle to become an electoral apparatus. The logical consequence of this is the recruitment of careerists that come from the discredited PRI, PRD or the PAN, who previously implemented austerity and anti-worker policies. To this is added the alliance with the Social Encounter
Party (PES), an openly right-wing party that is opposed to the right to abortion and marriage equality.

This situation has created skepticism, confusion and criticism among the more politicized young people, workers and indigenous people about the direction of MORENA’s leadership.

Izquierda Revolucionaria fully supports the movement to defeat the capitalist establishment. But it is also necessary to warn that Lopez Obrador’s moves toward class conciliation is a recipe to frustrate the expectations of the Mexican people. Once again, historical experience in Latin America (Bolivia, Venezuela, Ecuador, Argentina etc) or in Europe
(Greece most recently), shows that capitalism “with a human face” has not solved the serious problems that the working class suffers, nor has it eliminated the logic of exploitation and poverty created by the system. Lopez
Obrador has already announced that he will not undertake any radical steps like nationalization of big monopolies or stopping privatizations and cuts. If elected this will put him in conflict with the aspirations of his social
and electoral base.

Izquierda Revolucionaria (CWI) points out that voting and waiting for a candidate to pass laws that improve our situation, no matter how honest the politician is not sufficient. In order to face the crisis of Mexican capitalism, we need a working class socialist program, and to rely on the power of workers and young people as the only force that can implement social transformation.

The electoral campaign so far has shown that the bourgeoisie is not only unwilling to make any concessions, but instead is launching a huge smear campaign against Lopez Obrador, while once against preparing the ground for large scale fraud and even repression. In reality, they are playing with fire. Any attempt to repeat the electoral fraud that stole the election from Lopez Obrador in 2006 could open the door to an uncontrollable, explosive situation.

Workers, young people, indigenous people and poor peasants and those who want real change must organize and demand Lopez Obrador implement a socialist program as the only way to defeat the oligarchy and transform society in Mexico. This program must include the nationalization of banking and of large monopolies and strategic sectors
of the economy; the expropriation of big land owners and large agro-food companies; the defence of the rights of indigenous peoples; the repeal of all counter-reforms; and an end to state violence.