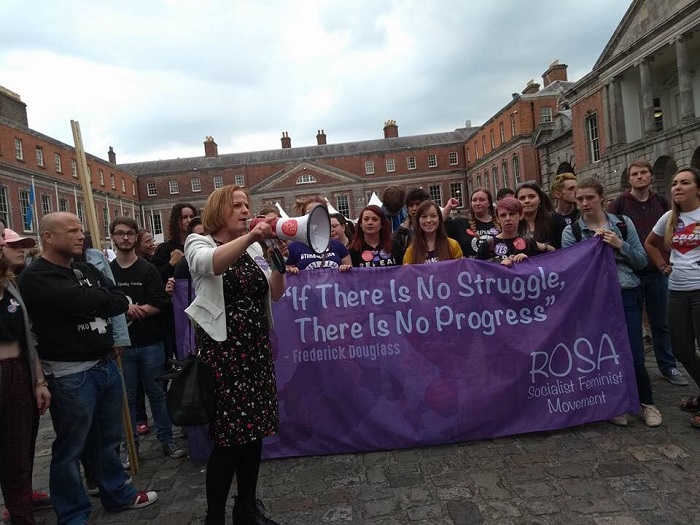 The dramatic and clear-cut “Yes” in the referendum is a political earthquake and turning point for Ireland. It is a huge victory, particularly for women in Ireland, who have thrown off the oppression of the 8th Amendment after 35 years. No delay can now be justified. There is nothing to stop the Dail [Irish parliament] to move quickly to enact legislation to give effect to the proposals from the Oireachtas Committee. No more people should suffer.

This is part of a global feminist and LGBTQ revolt against longstanding discrimination and this victory will be a huge boost to all those fighting oppression and for real equality right throughout the world. In particular, women and pregnant people in Latin America who literally die through lack of abortion rights will be empowered by this result.

This is also a victory delivered primarily by young people, the generation often disparaged as “snowflakes.” They were the ones who said enough was enough and made this an issue, particularly after the tragic and unnecessary death of Savita Halappanavar [Savita Halappanavar died of sepsis in 2012 after being denied an abortion during a protracted miscarriage]. It was young women who refused to go along with the hypocrisy of the “Irish solution to an Irish problem” and demanded and organised to force this change on a petrified and reluctant political establishment.

It must also be said and said loudly, that once again, as was the case with the water charges movement and the Marriage Equality referendum, the working class was the “secure foundation” as James Connolly once put it, of this enormous social change. Because of lived experience, a sense of solidarity is innate to the working class. It is the force pushing forward progress in this country, as was witnessed during the campaign and will be demonstrated by the size of the votes in working-class communities.

There was a broad official “Yes” campaign, and then within that, there was an independent grassroots movement that unfolded over the last years, months and weeks. It was this movement that made the decisive difference, including answering the outrageous scaremongering and lies of the No side.

This victory was also framed in large measure over the last years by those who have been the most ardent proponents of the right to choose, socialists and those of the left. Until very recently, Solidarity – People Before Profit was the only political entity in the Dill fighting for abortion rights, and with a clear pro-choice position.

There is a huge difference between some who voted “No” and then the organizers of the “No” campaign. The “No” campaign gave a frightening glimpse of the type of Ireland the self-styled religious right would like us all to live under. Dripping in misogyny, the no campaign spread suspicion about women and portrayed them as selfish killers and murderers. Their shaming and blaming of women from the start to the finish is completely unacceptable and devoid of morals.

Many felt increasingly vulnerable and less safe as their rhetoric was ratcheted up. They and their backward ideas have been rejected in this referendum. The fact that the majority of the public representatives of Dianna Fail [the main opposition right-wing party] were part of this campaign should not and will not be forgotten by people.

The referendum vote has implications for the North, where women and young people will not accept being left behind. Already in the North, ROSA activists are launching a major campaign to demand abortion rights there, starting with a Bus4Choice that will travel throughout the North next week with abortion pills, which have been proven to be safe.

What this resounding vote must lead to is the prompt passing of the legislation in the Dial and provision for the necessary services and care through the health service to allow for abortion for 12 weeks on request and for health. The Solidarity Bill on Sex Education should be passed. Free contraception must now be provided in the health service and promoted in society.

For this to happen, the political establishment needs to be kept under pressure by the grassroots movement. Remember we had to wait more than five years after Savita died before we finally had a referendum, the same must not happen in relation to these.

Young people were the key dynamic that created this victory against oppression and for control over their own bodies. With this under their belts it is not a matter of if, but when, will they act against an increasingly oppressive and pressurized education system; on the fact that they cannot get jobs with decent pay and conditions; that they cannot afford to rent or buy a decent place to live.

Leo Varadkar [Irish prime minister] may get a boost from this result, having jumped onto the right side of history at the last minute. But he, Fine Gael [the right-wing governing party] and any other party that defends and implements capitalist policies will face the full force of the youthquake that is coming. That is because they have no solutions to these burning issues and cannot satisfy the deep desire for justice and equality which is decisively pushing younger generations towards left and socialist ideas in many countries like America, Britain and Spain and, after yesterday’s vote, in Ireland, too.

As TDs [members of the Irish parliament] for Solidarity and long-standing members of the Socialist Party [Irish section of the CWI], we have a long record on these issues and fighting for the right to choose. We are proud to have been part of ROSA’s Time4Choice campaign which brought a real cutting edge to the “Yes” side in the referendum campaign and facilitated the development of the grassroots movement. This movement and ROSA are not going to go away, and aim to become a major socialist feminist force fighting for a radical transformation of this country.

Poland: The Women’s Strike Movement and the Way Forward