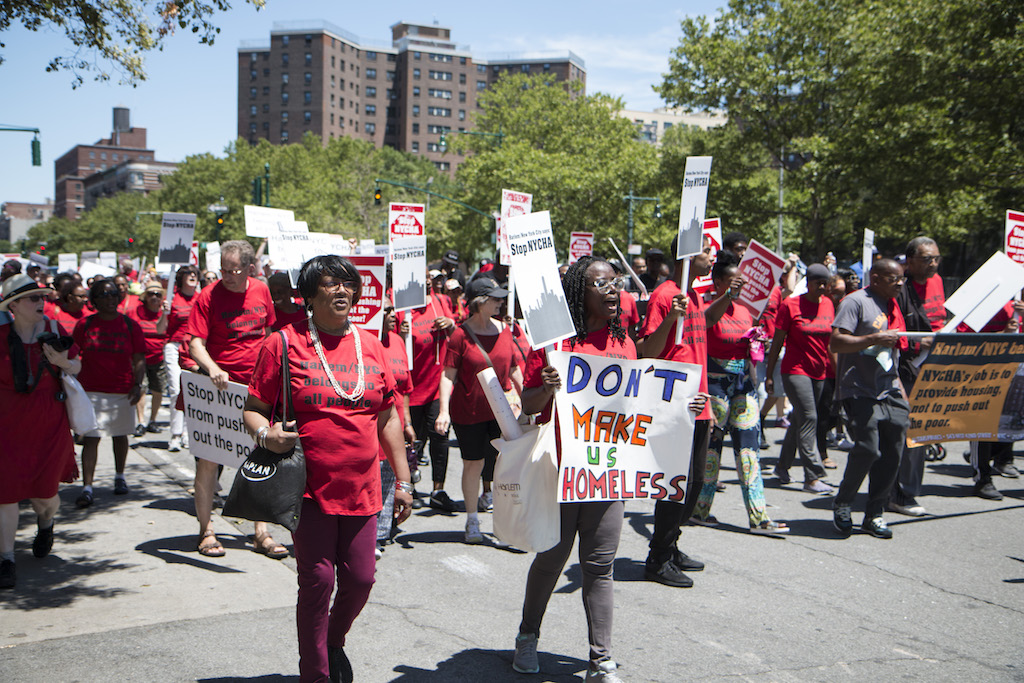 In November 2017, the New York City Department of Investigation (DOI) issued a bombshell report revealing that the New York City Housing Authority (NYCHA) for years failed to inspect apartments for lead paint, but falsely claimed to the federal government it had. Then, over a freezing winter, NYCHA’s heating and hot water boiler systems failed, leaving more than 80 percent of the NYCHA residents without heat for some time. The following article explains the background to the long decline of NYCHA and what can be done to improve life for public housing residents.

Crumbling infrastructure, rising living costs, toxic mold, and lapses in public safety. These are the conditions facing thousands of residents of the New York City Housing Authority (NYCHA), the largest public housing authority in the U.S. Forty years of slashed federal funding have left a gutted shell for public housing residents to huddle under. The Trump administration is a further threat. Free market ideologue Ben Carson is Trump’s Secretary for Housing and Urban Development, the federal agency that oversees public housing, and he has proposed 13 percent cuts across the board to HUD programs. NYCHA already needs $17 billion to properly repair the units that house approximately 600,000 New Yorkers. Residents are left to live in conditions rife with lead paint non-compliance and failing heating systems. How did NYCHA get here?

The crisis in NYCHA is worsening in the context of a growing shortage of affordable housing in NYC. The for-profit market is failing working class residents, and rents have increased by 33 percent from 2010 to 2017 – twice as fast as wages. This expanding void of affordable housing has led to the highest levels of homelessness in NYC since the Great Depression, at over 62,000 people. Four-hundred thousand families languish on the NYCHA waitlist, desperate to reach an affordable rung on the housing ladder.

In the midst of the Great Depression, working class residents fought for quality public housing as an alternative to the dominance of slumlords. Today, residents are outraged as NYCHA land is used for private housing, rents increase, and services are reduced.

Massive federal budget cuts to HUD began in the United States in 1981 as a part of a broader neoliberal program that attacked the gains of past worker struggles in an effort to shift power back in the hands of big business. The Reagan administration cut approximately $55 billion within a nine-year period. The state of affordable housing continued to decline under the Bush I and Clinton administrations, which pushed public-private partnerships to increase developer profits regardless of the negative impact on longstanding public housing tenants. The following Bush II and Obama administrations maintained the billion dollar cuts to low-income housing as the US experienced an economic recession. The New York City Council has reported that NYCHA lost $1.27 billion in capital funding and $1.37 billion in operating funds since 2001. The billions lost in funding has resulted in collapsing infrastructure, weakened building security, fewer staff for social services, and leasing public space to be re-purposed for private use.

The political choice, made by both Democrat and Republican politicians, to starve housing authorities of funding has contributed to the stigmatized view that public housing is low quality and for the poor. In reality, public housing can provide a powerful alternative to the failure of for profit housing. However, programs like NYCHA and affordable housing throughout the United States are doomed to fail when the concept of public residential units is discouraged and dismissed by government officials, like HUD Secretary Ben Carson, as an opportunity to give the poor a “comfortable setting” which might incentivize them to stay on welfare.

The Democratic Party rejects the ultra-free market ideas of Carson and the Trump administration, but Mayor Bill de Blasio’s NextGeneration NYCHA plan, based on “public-private partnerships,” is an example of how so-called “liberal” free-market housing policies also do not offer serious measures to address the deterioration of public housing in New York City. The Mayor’s plan proposes to build 17,000 units on NYCHA-owned land (public land), and make 13,500 of these apartments “affordable,” but not public. Essentially, private developers like Arker Companies, Two Trees, and Fetner Properties, all of which donated thousands of dollars to de Blasio’s campaigns, will rent out public land to build luxury apartment buildings on NYCHA parking lots and playgrounds, with the claim that half of the units will remain affordable. Some of the developers’ rent of the public land will go towards NYCHA’s $17 billion dollars worth of repairs.

This plan hands over the people’s public land to private developers, and will contribute to gentrification in previously affordable neighborhoods by pulling further high-income residents into neighborhoods while low-income residents stream out. Another part of the NextGeneration NYCHA plan to add revenue is to “implement several initiatives in order to improve collection rates,” which means squeezing rents out of residents who have problems keeping up with payments. Working-class people are pitted against each other because of de Blasio’s plan to aggressively rezone neighborhoods across New York for new development. This is the product of a capitalist system that drives developers to prioritize profits no matter the human cost. Their biggest priority when building units is to make money, and that means new developments are marketed to more affluent people. As higher-income workers displace lower-income ones, longtime residents are forced to move to poorer neighborhoods, idle on the enormous NYCHA waiting list, or even become street homeless.

A Socialist Plan for Public Housing

Instead of attempting to make meager gains within the limited budgets available, we need a massive investment in public housing funded by taxing Wall Street, big business and wealthy for-profit housing developers. We need a comprehensive expansion of the rent stabilization laws in private developments, which comprise the vast majority of housing units in New York City. Public land should be preserved and expanded, not turned over to developers.

There is an urgent need to fight for affordable housing. Wall Street, speculators, and developers are trying to squeeze as much profit out of the real estate market as possible and they have no interest in providing affordable places to live for the mass of the population unless there is a way to make money off it. We need to build a mass grassroots movement demanding full funding for NYCHA repairs, along with a serious expansion of quality public housing and stronger rent stabilization laws. Socialist Alternative is in solidarity with NYCHA residents and proposes a mass mobilization around the following demands to NYCHA: