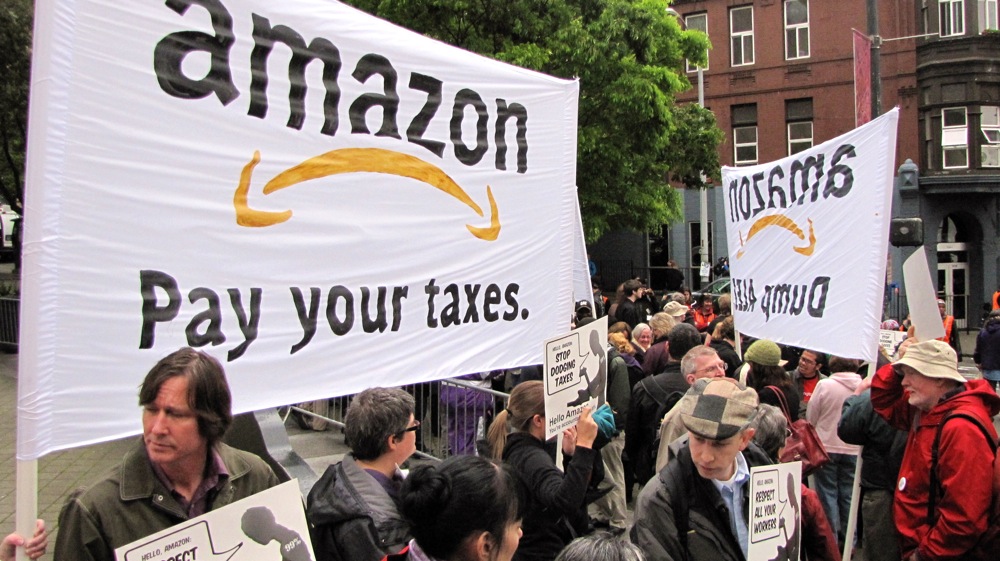 A window has been opened onto the inner life of Amazon and its billionaire CEO Jeff Bezos. What has been revealed is not pretty. In 2017, with profits on U.S. operations of $5.6 billion, Amazon paid $0 in taxes. Yes, zero! This makes you wonder, how can they do that?

The hundreds of thousands of low wages worker toiling in inhuman conditions in his sprawling warehouses pay far more in taxes. Yet with Trump’s recent tax cut for the rich, Amazon will receive a $789 million tax break in 2018. Amazon is the second-highest valued corporation in the world, with assets valued at almost $1 trillion. Jeff Bezos, with wealth of $130 billion, is the richest person in the world.

How did Amazon, founded in 1994, grow to become the wealthiest company in the world? Central to its success has been Jeff Bezos’ libertarian pay-no-taxes ideology, linked to a ferocious drive to maximize profits at the expense of the public and his employees.

Jeff Bezos first looked to locate Amazon’s headquarters on a Native American reservation near San Francisco that would have considerably lowered his tax bill. But this move was blocked by the state of California. So he set up Amazon in Washington state, which has one of the most regressive tax systems in the nation, including no personal income tax.

As described in a Newsweek article, “Amazon: How the World’s Largest Retailer Keeps Tax Collectors at Bay,” the company moved its international headquarters to Luxembourg, a tiny nation with secretive tax laws. This deal is still being investigated for possible corruption of EU public officials. Franklin Foer, author of World without End, describes how Amazon used the Luxembourg headquarters to dodge “a bill of at least $1.5 billion that would otherwise have been paid to the U.S. government.”

In this article, Jack Blum, a leading white-collar defense attorney, describes Amazon’s aggressive tax planning: “It’s a system that is beyond the capacity of governments, or for that matter the public, to really understand, and it allows the corporations tremendous ability to play games and in a way that negates the effectiveness of national tax systems,” he says. “For the most part, this is stuff that is kept in the deepest, darkest recesses of tax courts and corporate vaults, protected by secrecy provisions.”

It should be no surprise that Bezos established his Amazon empire based on a strategy of extreme cost-cutting, low-wage warehouse employees working at a brutal pace in his warehouses, and driving independent bookstores and other local retail businesses out of business. His repeated refusal to pay local taxes on internet sales robbed local communities of sales taxes, forcing them to implement cuts in needed services.

Amazon company once distributed color-coded maps to staffers to show which states they could travel to without attracting the attention of tax collectors. Amazon only began collecting sales tax in all 50 states in April of last year, 20 years after it went public.

Now, Amazon is looking to rip off the public by demanding billions of dollars in public taxes from cities across the country for the privilege of hosting Amazon’ second headquarters in their city. Offering 50,000 jobs, Amazon is promising a possible lifeline for depressed cities. This has set off a Hunger Games-style contest to see which state or city can gift the most public money to the wealthiest person in the world. The highest bidder so far is New Jersey, where state and local officials offered a combined $7 billion in tax incentives to lure Amazon to the city of Newark.

Amazon states it is looking for “A stable and business-friendly environment and tax structure will be high-priority considerations for the Project.” It adds: “Incentives offered by the state/province and local communities to offset initial capital outlay and ongoing operational costs will be significant factors in the decision-making process.”

However, a review of the consequences of Amazon’s residency in Seattle sheds a very different light on the value of their presence. Amazon is the largest employer in Seattle, employing an estimated 40,000 workers in recent years. Amazon’s growth has helped transform Seattle from a city where working people could afford to live into a playground for the rich. In the last six years, Seattle rents have increased 57%. The average renter now paying nearly $2,200 a month for a one-bedroom apartment!

This has created a massive social crisis, with a dire shortage of affordable housing, record levels of homelessness with working class and poor families forced to flee the city for the suburbs. This is drastically transforming the economic and racial nature of the city, with gentrification proceeding at an accelerated rate.

It is no accident that Kshama Sawant was re-elected to the Seattle City Council in 2015 for a second term as an open socialist on the slogan “Make Seattle affordable for all.” Sawant’s council office is helping spearhead a growing movement for affordable housing, including a bill to tax big business to pay for the construction of affordable housing.

It is seen as no coincidence that last month Amazon had a meeting with select Seattle city councilors. This meeting was closed to the public and the press. In 2010, Bezos personally gave $100,000 to help defeat Washington state initiative to tax the rich to fund education and social services.

A local reporter stated: “City Councilmember Kshama Sawant, who was not on the list to attend, summed up why the public should be concerned with the matter, ‘The public should find it troubling that elected officials, who have been elected by votes of ordinary people, are having a private meeting with billionaire interests.'”

The dog-eat-dog logic of capitalism rewards the most voracious business practices. Jeff Bezos and Amazon are demonstrating why Socialist Alternative calls for the public ownership of the top 500 major banks and corporations, and for them to be run by working class people in the interest of working class communities as part of a democratic socialist economy.