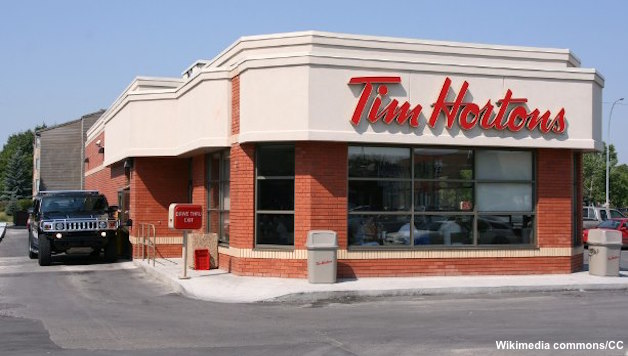 Tim Hortons is a national chain of over 4,000 coffee and doughnuts shops across Canada. Founded by a famous hockey player, it has become a Canadian icon often, known as ‘Timmies’. It is also the target of protesters since its attack on low paid workers ignited demonstrations across Canada. On Friday, January 19, over 50 rallies took place from coast to coast. There is a powerful public backlash against actions of some Timmies franchise holders who have cut paid break times and made their employees pay more for their benefits, as they claw back the increase in Ontario’s minimum wage.

On January 1, the minimum wage in Ontario went from $11.60 an hour to $14, a stepping stone to $15, next year. Once Ontario reaches $15, this will have raised the wages of 1.8 million workers, with those that were on the minimum, winning a 32% boost. Women, indigenous people and recent immigrants are the main beneficiaries of the increase. Contrary to Tory and big business propaganda, most workers who will gain are over 24-years old or work for companies employing over 100 people.

The franchise in Cobourg, Ontario, that launched the aggressive and mean-spirited attack, is not owned by a ‘hard-working mom-and-pop couple’. They are Ron Joyce Jr. and Jeri-Lynn Horton-Joyce, the son and daughter of Tim Hortons’ billionaire founders, Ron Joyce and Tim Horton. When contacted by media, they were “unavailable for comment”, at their winter home in Florida. The attack on Timmies’ workers has been taken up by other franchises across Ontario.

Tim Hortons was taken over by Burger King in 2014, in a $12 billion deal. The merged company, Restaurant Brands International (RBI), is in turn owned by a Brazilian multi-billion dollar corporation. RBI is not short of money, reporting profits of over $400 million on sales of over $5 billion in 2016. This, in part, was due to cost-cutting and more ruthless management, actions that have angered many franchise holders. A group launched a $850 million class action lawsuit against RBI, alleging intimidation and claiming that since the takeover relations have become “more adversarial than amicable.”

Ontario’s increased minimum wage is a major victory for the organizing efforts of 15 and Fairness. The new law that increased it also brought other benefits to low-paid, insecure workers including, a minimum of 10 days of personal emergency leave and part-time, temporary and casual workers to be paid the same rate as full-time staff doing the same job. The new law makes it easier for union organization in some sectors.

Erendira Bravo juggled up to four jobs, none full-time. The endless days of working on-call and taking virtually any shift took a toll on her personal life and family. She questioned her self-worth, saying, “At one point I almost believed that I was not human.”

Tim Hortons’ actions will reinvigorate the 15 and Fairness campaign and, with the unions, they need to win stronger labour laws and work to unionize precarious workers in multimillion dollar franchises.

The Ontario Liberals’ cynical and very recent embrace of the minimum wage issue is due to their electoral unpopularity and polls showing 70% support for a substantial increase. The actions of Tim Hortons have allowed Ontario’s Liberal leader, Wynne, to pose as the champion of low paid workers. In June, Ontario has an election which could see gains for Ontario’s Progressive Conservatives, who threaten to delay next January’s minimum wage increase. The labour movement must be prepared to mobilize to make sure this does not happen.

Unfortunately, the Ontario Nation Democrat Party (social democratic NDP) appears outflanked on the left by the Liberals, concentrating on concerns that small businesses need help to mitigate the costs of $15 minimum wage. It is true that mom-and-pop stores are a vanishing breed in Canada. If the NDP wanted to help them it could campaign for strong rent control to rein in skyrocketing commercial leases (lacking in most of Canada), access to low-interest credit and reduced charges by banks.

Big business, who employ the majority of low-paid workers, hide behind small businesses, but have no interest in helping them flourish. In fact they, along with soaring rents, are driving small businesses out of existence. In contrast to giving tax cuts to the rich, increasing the minimum wage would benefit many small businesses as people would have more money to spend in their local business.

The actions in Ontario show how some employers will seek to maintain their wealth and will resist any attempts to reduce the soaring inequality in Canada. The wages of some Timmies’ workers around Vancouver start at $16 an hour – they have a union, and the franchise is doing fine. The attacks in Ontario are also a warning to workers in BC and Alberta, as their minimum wages are set to increase.