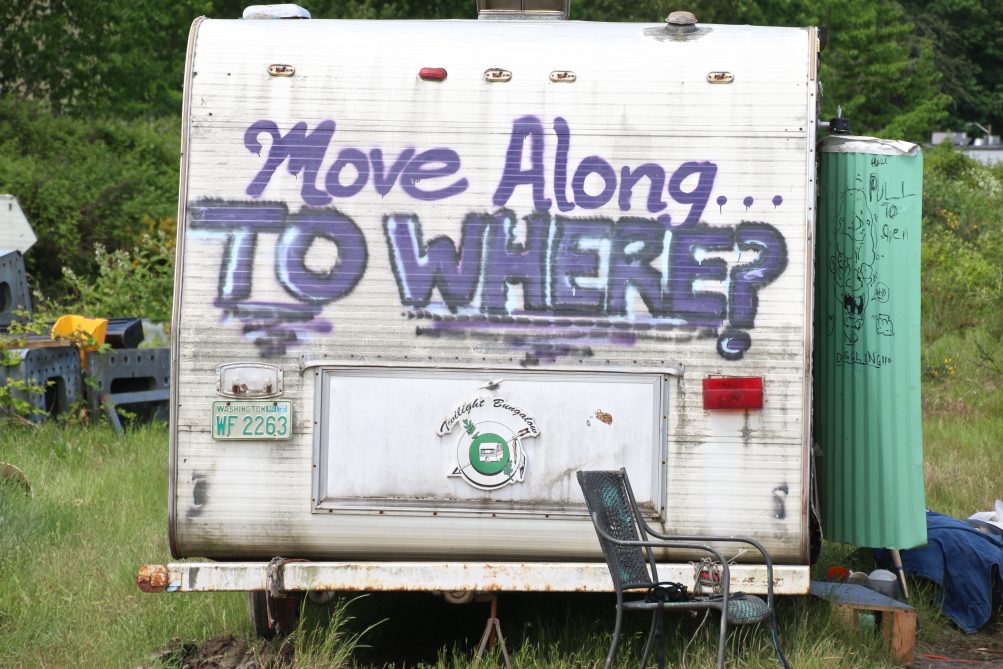 “I’ve been here for eight years… I didn’t even know we had to move today. It’s 30 degrees outside, and I’m not going to do it… I’m a human being. Don’t come and steal my stuff from me just because you have more power than I do,” said Eric Lee Jordan, a resident of a homeless encampment near the I-90 highway in Seattle.

Seattle City Councilmember Kshama Sawant, of Socialist Alternative, and a broad coalition of organizations, many of whom are organized into a coalition called “Housing for All,” are mobilizing for a City Council Public Hearing on November 1st at 4pm and plan to stay at City Hall overnight to demand to end the brutal demolition of unsanctioned encampments of homeless people (called “sweeps”). Instead of wasting money on sweeps, we are proposing a tax on big business to build affordable housing and fund human services in this year’s city budget which will be finalized in mid-November.

These necessary demands would reflect the city’s declared “State of Emergency” on homelessness, which will have it’s two-year anniversary during the protest on the morning of November 2nd. Over the past two years, the city’s political establishment has wasted millions of dollars sweeping homeless people around the city, but has rejected bold proposals which would help end homelessness such as taxing big business to build affordable housing.

Last year alone, the City of Seattle conducted 601 homeless encampment sweeps. These sweeps are brutal, and in the case of Michael Taylor, even resulted in police officers killing a resident this summer. Despite these brutal tactics (and in part because of them), the crisis of homelessness in Seattle gets worse.

As the bi-weekly Seattle newspaper “The Stranger” reports, Sawant’s proposal, which has been agreed to by two of the eight other city councilmembers so far, would “stop the city from spending any money or staff time on sweeps on public land. Exceptions would be made for school property, active rights of way like sidewalks and roads, and ‘activated parks’ (basically, parks that people actually use).”

This year, Seattle passed the 8,000-mark of homeless residents, with 3,857 of them sleeping outside. That’s a 31% increase from the year before, which was already a 19% increase from the year before that, despite the city conducting 601 homeless encampment sweeps in 2016 alone. One thing is clear: Homeless sweeps are not only inhumane, they’re also ineffective. In fact, every person who has suffered through a homeless encampment sweep will be able to tell you how it actually makes things worse as the instability makes it harder to find jobs and increases vulnerability to assault.

Contrary to the myth of the local corporate media that homelessness is a problem coming in from the outside, 77% of homeless residents in Seattle had the same county as their last address before they became homeless. A recent study showed that when the rent increases by an average of $100/month, homelessness increases by 15%. More renters by the day are driven out of their homes and into their streets by the endless pursuit of profit by increasingly large developers and corporate landlords. One effect of the acute housing crisis is that more and more people are realizing that the interests of homeless people, renters and ordinary working people are linked with a common enemy of the big developers who are making millions off making Seattle unaffordable for us.

The Racist Side of the Housing Crisis

The issue of homelessness also stems from the racist implications of the 2008 housing crisis, which stole 50% of black family wealth, primarily through home foreclosure. This is compounded by the racially-biased hiring practices of tech companies and the racist policies of big developers renting out new units. The sum total of these discriminatory practices of capitalism is that 29% of homeless people in the area are black, despite only representing 6% of the general population.

As Malcolm X said 50 years ago, which is just as true today, “You can’t have capitalism without racism.” Every system based on scarcity and inequality needs to justify itself by dehumanizing those who are most oppressed, but this system of divide-and-conquer social control is also falling apart as more and more working and oppressed people face low-wage high-debt futures, and are seeing their fates interlocked.

Every city councilmember in Seattle will say that they support fighting racism, and they support building housing and ending homelessness. However, rhetoric does not match action for most councilmembers. To take one example, in an immediate response to the Mayor’s ‘State of Emergency’ two years ago, Kshama Sawant fought for $10 million to expand shelter space and serve homeless people alongside the activists and the advocates from the Seattle/King County Coalition on Homelessness. Councilmember Sawant explained, “that proposal—and this shows you what we are up against in City Hall—got only two votes: myself and former Councilmember Nick Licata.”

Socialist Alternative has fought alongside residents of these encampments at every turn for the city to empower, sanction, and support these self-organized encampments. It was through the efforts of encampment residents, activists, and socialists in the 2014 budget that city money was dedicated to these encampments for the first time. We will be fighting for expanding the number of city-sanctioned encampments as well in this years’ city budget as well as an amendment in this budget to fund dumpsters and bathroom services for all unsanctioned homeless encampments.

The encampments of course contain within them all the problems that come from people suffering from desperation and being unsheltered including mental distress and drug dependency. While bringing about a certain amount of security & stability, they are by no means utopias nor should they be viewed as permanent solutions. However, with all of their issues, are a remarkable example of ordinary people creating community supports even in the harshest of circumstances. Some of these encampments are self-organized to the extent of having elected leadership, 24-hour security, and organized distribution of goods and services.

While our campaigning to stop the sweeps has been met with broad support for our struggle and solidarity with the homeless people, a minority of residents in Seattle, frustrated with the double-speak coming from the political establishment in Seattle have adopted a cynical Trump-like attitude of blaming homeless people. It’s an example of how Democrat corporate politicians’ betrayals can sew the seeds for right-wing populism to take root, and it’s why it’s so important that we build mass movements of working people that can fight for real solutions to the crisis.

Vote for the Independent Socialist Jon Grant on Nov. 7

While we should not put one more penny of city money into encampment sweeps which hurt rather than help the crisis, homeless encampments are not a real solution to the crisis of homelessness. We need a massive investment in publicly owned affordable housing to cut across the dictatorship of the profit-driven private market. This is a big reason why Socialist Alternative in Seattle is urging people to vote for Jon Grant for City Council on Nov 7, who has laid out a concrete proposal to build 5,000 publicly owned affordable homes in five years by taxing big business. It’s no coincidence that he, unlike his opponent, is putting forward bold proposals like this, and that he, unlike his opponent, is refusing all corporate and developer money. If Jon Grant is elected as another socialist independent of the two corporate-funded political parties, our movement will be in a stronger position for the bigger battles ahead. In 1984, members of our sister organization in England won a majority of the Liverpool City Council, and built over 5,000 homes in 4 years, even while Margaret Thatcher and her right-wing Tory government were in power nationally.

The Seattle renters’ movement has already won some important gains, such as caps on move-in fees, controls on rent-hikes for buildings with housing code violations, sanctioned homeless encampments, and tens of millions invested in affordable housing instead of being invested in militarizing the police. In the next few weeks, we hope to build a strong enough movement to stop the sweeps and pass funding for more affordable housing in this year’s budget by taxing big business. Win or lose, we will use these battles to build a stronger, broader, more united movement that is capable of winning rent control, taxing big business to build the massive amount of publicly owned high-quality affordable housing that we need, and ultimately solving the market-driven housing crisis through democratically controlled public planning by ordinary working people. A better world is possible – a world of democratic socialism where homelessness is thrown into the wastebin of history where it belongs, but only if we fight for it.