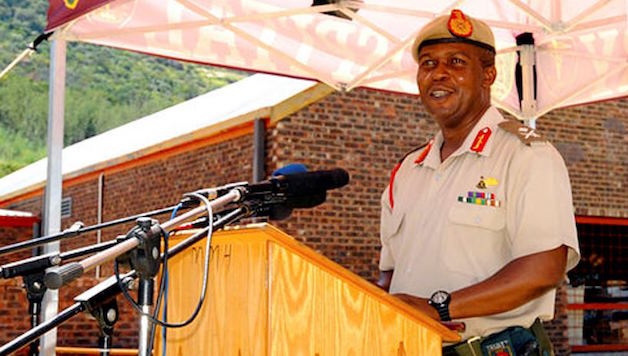 The assassination of Lesotho Defence Force Chief, Lt-General Khoantle Motsomotso, on 5 September, by two fellow-officers and former-allies, themselves, in turn, killed by Motsomotso’s bodyguards, is unfortunately not a shock in a country where assassination is no longer an exception to the rule. His murder, like that of his predecessor Maaparankoe Mahao, in 2015, has again pushed the mountain kingdom, embedded within South Africa both geographically and economically, into a political crisis.

These events have shattered the myth of successful diplomatic pressure, backed by thinly veiled military threats by the South African government, underway since an attempted military coup in Lesotho on 30 August 2014. Since then, South Africa’s deputy president, Cyril Ramaphosa, and a cohort of ‘Southern African Development Community’ (SADC) politicians have been engaged in efforts to stabilise the political situation, which has clearly only papered over the cracks.Recognising the depth of the current crisis, the South African government, along with Mozambique and Angola, are already deploying their armies in Lesotho, under the cover of an SADC “stand-by force”. This is in open preparation for a repeat of South Africa’s 1998 imperialist-style military intervention, if necessary.

It is probable that the threat of military intervention will suffice to terminate the present stalemate, and even ‘restore’ stability, but this will only be temporary. In the final analysis, the political instability in Lesotho has deep-roots in the on-going world economic crisis of capitalism and the choking-grip of South African imperialism.

But South Africa’s ‘peace-missions’ are nothing more than aggression by an aspiring regional imperialism, which likes to play big in a small town. The African National Congress (ANC) government’s main fear is that volatility in Lesotho will threaten its vital economic interests there, just as it is terrified of the potential revolutionary intervention of the masses.

The decline in South African mining and farming are having a devastating impact in Lesotho. Massive job losses in these sectors and their repercussions for the employment of domestic workers are disproportionately borne by Basotho workers and their home economy, which heavily depends on remittances from migrant workers. Though the economy has grown significantly in the past decades, including the past few years when growth averaged 4.3%, the appalling conditions of the Lesotho working class have not improved. Almost 60% still live in grinding poverty, about 40% of the youth are unemployed and the poor suffer a devastating legacy of aids, which has left 100,000 aids orphans in a population of only 2 million people.

Whatever the detail of any settlement South African imperialism can ‘impose’ to discipline the various factions of the political establishment, for the workers and poor of Lesotho it will mean little more than a temporary re-balancing of the stranglehold of the pro-capitalist politicians. None of these people offer any way out of the underdevelopment and poverty to which capitalism condemns Lesotho.

Desperation has understandably fed illusions in the possibility of South Africa offering solutions to the intractable problems of Lesotho. That the petition initiated by the trade unionist Vusi Tyhali, in 2010, for the incorporation of Lesotho into South Africa easily gathered 30,000 signatures expresses the lack of faith in Lesotho capitalism but unfortunately also illusions in South African capitalism.

The working class of Lesotho should reject and actively oppose any meddling in their affairs by South African imperialism and its puppets in the SADC. They have subjugated this tiny mountain kingdom into a slave neo-colony, perpetually serving the voracious appetites of South African and international monopoly capital for its abundant natural resources (minerals, water, etc.) and cheap migrant labour that are vital particularly to the South African mining industry.

The squabbles at the tops of the ruling elite reflect, in the final analysis, the rising temper of the masses in Lesotho against the endless poverty, mass hunger, disease, humiliating dependence and xenophobia in South Africa. These sentiments were eloquently expressed in the mass demonstration of 23 August 2011, which the media dubbed, “the mother of all demos”, organised by taxi drivers, trade unions, NGOs and youth organisations. Most strikingly, these protests were not led by any of the parties of the ruling elite.

The demands of the demonstrators showed they were directed against South African imperialism, as much as its corrupt political puppets in Lesotho. The protests were also distinguished by particularly far-reaching demands, which included 100% increases in factory wages and taxi fares, provision of water, electricity, etc., an end to corruption, free access into South Africa and the return of agriculturally fertile land stolen from the Basotho people by colonialism that has reduced Lesotho to the landlocked mountainous enclave that it is today.

The size and sweep of this march demonstrated the shifts in class and political consciousness that are developing beneath the surface of society. This represents an anticipation of the rupture of the working class with the traditional politicians of the ruling elite, which will, in due course, bring about the independent political organisation of the workers and the poor of Lesotho.

The working class of Lesotho deserves the active support and international solidarity of the South African working class. Ultimately, it is only a revolutionary, mass movement of the united working class of Southern Africa that can smash capitalism and build a genuinely free, democratic federation of socialist states in Southern Africa. This would be clear alternative to colonial balkanisation that offers no prospect of real independence, economic development or a decent life.

Democratic Republic of the Congo: Anniversary of Independence

ABOUT US
Socialist Alternative is a national organization fighting in our workplaces, communities, and campuses against the exploitation and injustices people face every day. We are community activists fighting against budget cuts in public services; we are activists campaigning for a $15 an hour minimum wage and fighting, democratic unions; we are people of all colors speaking out against racism and attacks on immigrants, students organizing against tuition hikes and war, people of all genders fighting sexism and homophobia.
Contact us: info@socialistalternative.org
FOLLOW US
© Socialist Alternative 2020 | All rights reserved
7 Shares
Tweet
Share7