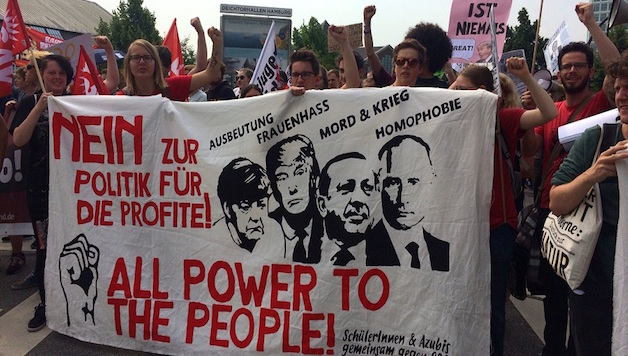 Police intimidation could not deter mass protests of 76,000 taking to the streets of Hamburg last Saturday, July 8, loudly protesting the G20 summit held in the city. A massive and colourful demonstration thronged through the streets in a kilometre-long procession called by a broad left alliance that included the Left Party (DIE LINKE), attac, organisations representing migrant communities, Youth against G20, Linksjugend [’solid], the youth organisation of the Left Party, the extra-parliamentary left and many others. The SAV, the German section of the CWI, also mobilised nationwide support for the protests.

It is difficult to estimate how many people were deterred from taking part in the protests due to police violence and the escalation of violence it provoked. No-one can say just how many people changed their minds and stayed at home, but it is surely the case that in many Hamburg homes parents did not want their children to join the demonstration and perhaps prevented them from doing so. With this in mind, it was quite remarkable that so many people who one would not normally have expected to protest decided that it was important for them to turn out this time. For some people, the police brutality was what prompted them to join the protests.

The huge numbers on the demonstration can be attributed to the success of the campaign against the G20 summit and the anti-capitalist movement, as a whole. It is an example of what is needed in the struggle against global capitalism: mass mobilisation and politicisation, as opposed to the tactics of the “autonomous” elements who provoke police reprisals and spout empty radical phrases. Their propaganda fails to resonate with the very workers and socially-deprived sections of society that the Left needs to reach and to mobilise: those people who are not yet organised in left politics but are victims of the politics of the G20 and capitalist exploitation.

Many groups of migrants took part in the demonstration, especially large numbers of Kurds opposed to Erdogan. Protected by the ranks of thousands of demonstrators and the solidarity shown towards them, it was possible for them to hold up the banned symbols of the YPG (Peoples’ Protection Units) from Rojava, who have been fighting the so-called Islamic State. Displaying the banner of the YPG amidst the sea of flags and banners on the demonstration was seen by many as a successful act of civil disobedience.

The reports of the capitalist media have largely focused on the rioting and destruction that occurred in the Schanze Quarter of Hamburg as night fell. As usual, many media reports grossly understated the actual number of people who took part in the main demonstration. The true figure – and there is no doubt about this – was at least 76,000. This expresses the real character of the opposition to the G20 and it is important to make this clear.

SAV members from across Germany and from other sections of the CWI in Israel, Austria and Australia took part in the week of protests and demonstrations, selling around 700 copies of our paper Solidarität, participated in a 3,000 to 4,000 strong student and school student protest, initiated a women’s march with 500 participants and held a public meeting about socialism that attracted 80 people

On the Saturday the SAV, Linksjugend (Left Youth) from the Hamburg areas of Altona and Barmbek, as well as the revolutionary left group within the Left Party marched together in one bloc behind the ‘Youth Against G20’ loudspeaker. Our chants – “G20 is the face of capitalism — the struggle is international”, “Break the power of the banks and multinationals”, “Side by side, is unity – we’ll fight the G20 in every country” and other slogans were taken up by others. Everyone was struck by the great mood on our bloc. In general, the demonstration was very political, with many speeches critical of the capitalist system.

During the demonstration the police attempted to apprehend individual protesters. Shortly before the demo reached the closing rally, the police attacked a loudspeaker van from which loud music was playing and bubbles blew. They attacked for absolutely no reason and when demonstrators attempted to defend the people inside the van by sitting down on the road, they were attacked by police water cannon. This is just one example of hundreds of cases of arbitrary police violence in Hamburg throughout the week.

During the entire last week, especially on the day before the big demonstration, the media issued a constant flow of reports about the ‘damage’ being caused by ‘leftist’ vandals in the city. The images of burning cars, barricades and looted stores in the Schanze Quarter of Hamburg made many people feel undated and rightly indignant. The destruction these senseless actions caused gave the police and the state an excuse and justification for their repressive behaviour. But it is not clear, at this stage, exactly who was responsible and who took part in the rioting.

One thing is clear, the authorities – the State – had intended all along to portray the protests as chaotic and violent to discredit and weaken the movement. In this light, the success of the demonstration is all the more remarkable.

There is no doubt that it could have been bigger still, if the trade union leaders had mobilised support. This happened in only a few cases: the teachers’ union, GEW Hamburg, and some branches of the local trade union youth mobilised their members. Worse still, the trade union leadership joined forces with some NGOs and charities to put forward “moderate” opposition and split the movement by calling a separate demonstration on July 2. Embarrassingly for them, more trade union members joined the July 8 protest, despite the fact that it had not been organised by the unions or called under the banner of the trade union movement.

Violence in the Schanze neighbourhood

The SAV has distanced itself from the looting and arson attacks on shops and cars, not least because the victims are often working class people who live in the area. Such actions are completely counterproductive, serving only to alienate the working class from the “leftists” and demobilising rather than encouraging broad layers to join the fight back. There may have been some local disaffected and socially disadvantaged youth letting off steam and getting out of control, perhaps seizing the chance to help themselves to a new smartphone, but it is also conceivable that the police, not for the first time, used agent provocateurs.

Yet it must be said that especially in the last few days we were confronted by a new level of police violence which prompted a representative of the emergency legal services to say that the police had “taken power” in the city. For the State it was like a “practice run in suppressing an insurgency, although no insurgency had taken place”.

It started with the illegal blocking of a campsite for protesters at the start of the week and continued with brutal, planned attacks on the autonomous, “Welcome to Hell” demo on Thursday evening, followed by the random beatings that took place over the past few evenings. Eyewitnesses told us that on Saturday evening, for example, the police waded into groups of young people sitting peacefully together. They were driven into the side streets and despite the pleas of the youth not to use violence against them, were pepper-sprayed in their eyes. There are countless reports of such police violence from people who happened to be in the Schanze and Pferdemarkt areas of Hamburg.

The treatment of journalists by the police also reveals the restrictions that will be placed on our “democratic state” when it is felt that the interests of the ruling class need defending. Critical journalists’ credentials for the G20 summit were rescinded. Members of the press were deliberately exposed to pepper-spray amidst threats of “fuck the press”. A policeman told a female journalist from the left wing daily paper, taz, “Okay, you’ve worked long enough as a journalist”.

Now the ruling class will instigate a massive campaign against the Left, trying to exploit the Hamburg events in the coming election campaign. Ruling Christian Democrat party (CDU) politicians demand the shutting of left wing social and cultural centres. Sigmar Gabriel of the social democratic SPD and Vice-Chancellor in the current grand coalition has called for an international search for “violent left-wing perpetrators”. There are attempts to draw comparisons between “left extremists” and neo-Nazis and Islamist terrorists. We can predict this propaganda will be repeated over the next few weeks. It is essential that a broad counter offensive is organised to make the real protest events in Hamburg more widely known and to answer attempts to criminalise the left or curtail any democratic rights. It is vital that the trade unions also take responsibility for this campaign.

Nigeria: Lessons of the #EndSARS Struggle