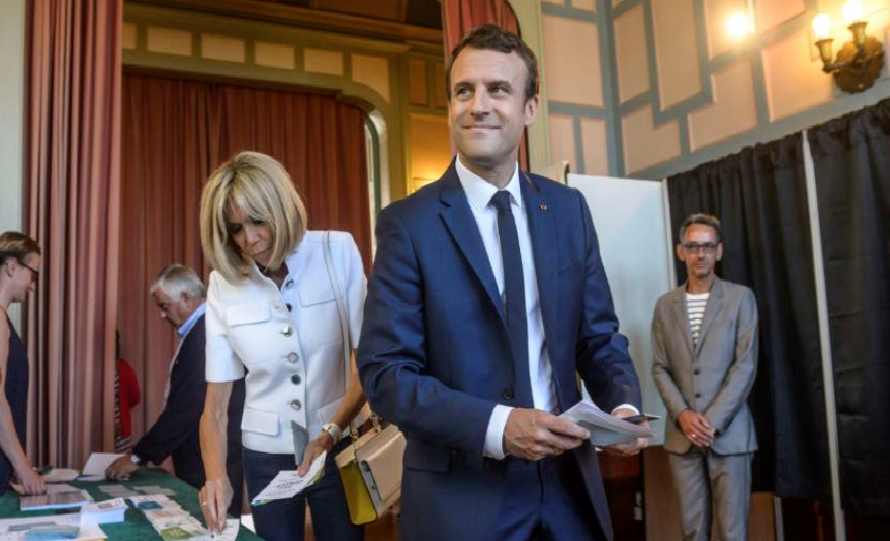 Amid the trumpeting about a massive vote for the party of the new President, Emmanuel Macron, in the first round of France’s parliamentary election last Sunday (June 11), a deep malaise pervades in French society. It is indicated by a record number of voters staying away from the polling booths; less than half of the electorate turned out to vote. A large swathe of the electorate either did not vote or voted without enthusiasm.

Macron’s newly formed party, LREM (La Republique en Marche), may end up after next Sunday’s second round with up to 445 of the Assembly’s 577 seats – “potentially the biggest majority since president Charles de Gaulle’s conservatives and allies got 80% of seats in 1968” as Reuters comment (after 58 % of the votes in the first round). And that was on a nearly 80% turn-out. (It should also be remembered that for de Gaulle that was a Pyrrhic victory as, within a year, a national referendum on which he staked his future came out against him and he retired from political life.) But in reality, it is only 6.3 million votes for LREM, far less than Hollande in 2012 (10.3 millions for the presidential majority in the first round) or Sarkozy in 2007 (11 millions).

Macron was the first choice for president of less than a quarter of voters. His vote of just 16% of those eligible to vote is actually less than the proportion of Britain’s electorate who voted for the party of the hapless Theresa May in Britain last week. The right-wing “Republicans” came second with 15.77% and Le Pen’s Front National got 13.2%. Marine le Pen herself came top of the poll in her northern constituency of Henin-Beaumont (North), but may be defeated by the kind of “anti” vote which saw Macron win the second round of the presidential election. Her party could end up with no more than four seats in parliament. Fifteen are needed to form a parliamentary group with rights to be able to speak at each session and propose laws.

France Insoumise is the organisation of Jean-Luc Melenchon, who, with his pro-worker and anti-capitalist programme, won seven million votes in the presidential election, nearly reaching the second round. It, too, is hoping for enough seats to form a parliamentary group. With 11% of the first round votes for parliament, it fared better than the ill-fated so-called Socialist Party (PS).

The vote for the previously governing pro-capitalist PS collapsed from 29.35% to 7.4% (9.5% with allies). The party’s presidential candidate, Francois Hamon, was defeated in his constituency as was the PS secretary, Jean-Christophe Cambadelis, who acknowledged that the first round marked an “unprecedented” setback for the party which was expected to get between 30 and 40 seats in total. The future of the party is in the balance. As Gauche Revolutionnaire – the CWI affiliate in France – has explained, there could be a three-way split and an eventual disappearance of the one-time social democratic party that had both the president and a parliamentary majority until two months ago.

Collapse of the “Socialists”

It was the refusal of the “Socialists” to take on the French bosses and the banks and make them pay for the crises in the economy that saw workers, young people and the middle layers involved in a mass movement of strikes and mass demonstrations in the Spring of last year with an unprecedented repressive attitude from the government despite it being a so-called “left” government. Macron, with a background in banking and no party allegiance, had been taken into the Hollande government as Minister for the Economy to assist in pushing through the deeply unpopular changes to the country’s labour law. Now, as president, he has declared his intention to continue on this path and get new laws regulating the relationship between workers and employers rammed through by presidential measures in June and ready for full adoption in September.

The trade union leaders have warned him to “go slowly” on these plans, and there is some talk of protests demonstrations in June, before the big shutdown of the Summer holidays. But much more should be done. Macron has already felt he has enough power in his hands to announce plans for France’s state of emergency to be permanently written into law.

Macron has been presented in the capitalist press internationally as neither left nor right, but his programme is blatantly pro-business – continuing attacks on the welfare state while lowering taxes on the rich. As Rachel Mahe of Gauche Revolutionnaire said, in a post-election speech to those who supported her candidacy on behalf of France Insoumise in Drome, southern France: “Macron’s policies will amount to a ‘social coup d’etat.’ Mass resistance must be built from today onwards!” Rachel got a very creditable 10% of the vote – the highest score of the “left” candidates in her constituency – far more than the “Communist” Party (who had refused to make an alliance with her, despite the proposal of a joint ticket) and the PS.

There can be all sorts of deals and realignments for the second round on June 18. There will be a big push for more people to go out and vote. But, as Gauche Revolutionnaire has said, given the mass discontent amongst workers, the continuing industrial battles taking place, the counter-reforms in education and the lack of jobs for young people, the more important battles will be in the workplaces and on the streets.

The political follow-up consists in elaborating how a new left force can build on the success of Melenchon’s movement, in pushing for a clear lead on mass mobilisation against the government’s attacks and arguing for clear socialist policies that can gather support and destroy the apparent invincibility of the Macron phenomenon.