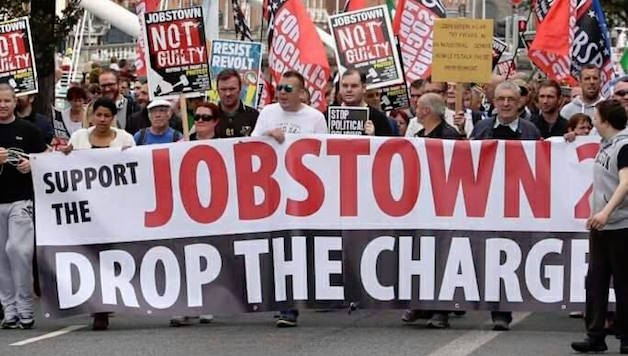 Two and a half years ago in Ireland, nationwide protests against water charges – a new double tax introduced along with massive austerity measures – were building steadily. As the rate of nonpayment by households was rising toward 70%, Joan Burton, a leading government minister and member of the Labour Party, attended a graduation ceremony for adult students at An Cosán community centre in Jobstown, a working-class community which had felt the brunt of the austerity measures.

A protest was quickly organized by local anti-water-charges activists. Members of the Socialist Party – part of the Committee for a Workers International, with which Socialist Alternative is in solidarity – including Paul Murphy, the parliamentary representative (TD) for the area, and two local councillors joined the protest. Burton attempted to avoid hearing the protesters’ complaints by ducking out the back of the building to a waiting Garda [police] car, but the car was quickly surrounded by the protesters, determined to have their voices heard. A two hour standoff followed, as Gardaí attempted to force the crowd back and Burton remained in the car. Ultimately, an agreement was reached to slow-march her car out of the area at the back of the protesters.

The government, the media, and the police seized on this standoff as a way to divide the anti-water-charges movement by discrediting its most radical wing – those calling for mass non-payment – as dangerous, violent rabble-rousers.

Incredibly, the state has charged 18 people with “false imprisonment” – essentially kidnapping – a charge which can carry a sentence of life imprisonment. The trial of the first seven, including Paul Murphy and both the local councillors, started on April 24 and is expected to conclude in early June.

While the state saw this trial as an opportunity to discredit the movement, the first two weeks of the trial have been an opportunity for the activists, through their lawyers, to expose the web of lies built up by the Gardaí and leading politicians for political purposes.

The first week of the trial saw a tearful Joan Burton testify that she was “terrified” by the crowd who shouted abuse at her and banged continually on the roof of the car. Karen O’Connell, the aide who was with her in the car, described it as “one of the most scary experiences of my life” and called the protesters “an angry mob.”

The defense responded by showing cell phone footage from the day, both from protesters and from Burton’s own cell phone, that clearly showed her calmly reading a paper or talking with O’Connell while protesters surrounded the car chanting slogans such as, “They say cut back. We say fight back.”

In one clip, O’Connell refers to the protesters as “fucking dregs.” In another near the end of the protest, Burton is advising O’Connell on how best to spin the event on social media: “What you should do now is go on social media and say it is just shameful: all the little kids there, no one minding them – they were just free to roam the streets.”

This apparent concern for the children of Jobstown is particularly ironic coming from a minister who ended Family Support payments for many single parents, forcing them and their children further into poverty.

Week two saw the trial shift to testimony from the Gardaí. Over the course of the week, multiple Gardaí contradicted their own sworn statements, and each other, while giving a picture of events clearly at odds with the video evidence. The most striking alternate reality presented was the picture of Paul Murphy as the commander of the crowd – egging them on to “keep her all night.” Multiple Gardaí gave some version of this testimony, and it was put to all of them by the defence that, not only had Murphy not said this, but that there had been a democratic vote by the protesters. None of the Garda could remember any such thing.

This caused further problems for them when the defense showed the court cell phone footage of Paul Murphy coordinating not only a vote, but a debate, where a female protester put the case for maintaining the standoff and keeping the car where it was, and Mick Murphy – one of the local councillors – put the case for marching the car out of the area. The video clearly shows Paul Murphy voting for Mick’s proposal, while the majority of the protesters at that point vote to stay put.

As this case has unfolded, the collusion of the Gardaí and the political establishment in trying to suppress political dissent has become incontrovertible. As Paul Murphy wrote, “The trial has the potential to cause a significant crisis of legitimacy for institutions of the state including the Gardaí. Convictions will rightly provoke anger and protest, with wide sections of society shocked that anybody could be convicted of false imprisonment or violent disorder because of participation in a peaceful protest. Acquittals will provoke a widespread questioning about why the state spent millions trying to victimise protesters.”

This trial is also contributing to the complete discrediting and collapse of the base of establishment parties – in this case, Labour, which used to be a workers’ party but has become an enforcer of neoliberal policies. The crisis of the “mainstream,” “center-right,” and “center-left” parties can be seen across Europe, most recently in the French presidential election. Faced with the deepening crisis of capitalism, working people and youth are searching for a solution. This creates a huge opening for the genuine left like the Socialist Party and the broader left alliance, Solidarity, of which it is part. But in Ireland, we also see the road of repression that the ruling class will take to defeat working-class resistance to austerity. For this reason, the trial and its outcome have huge international significance.