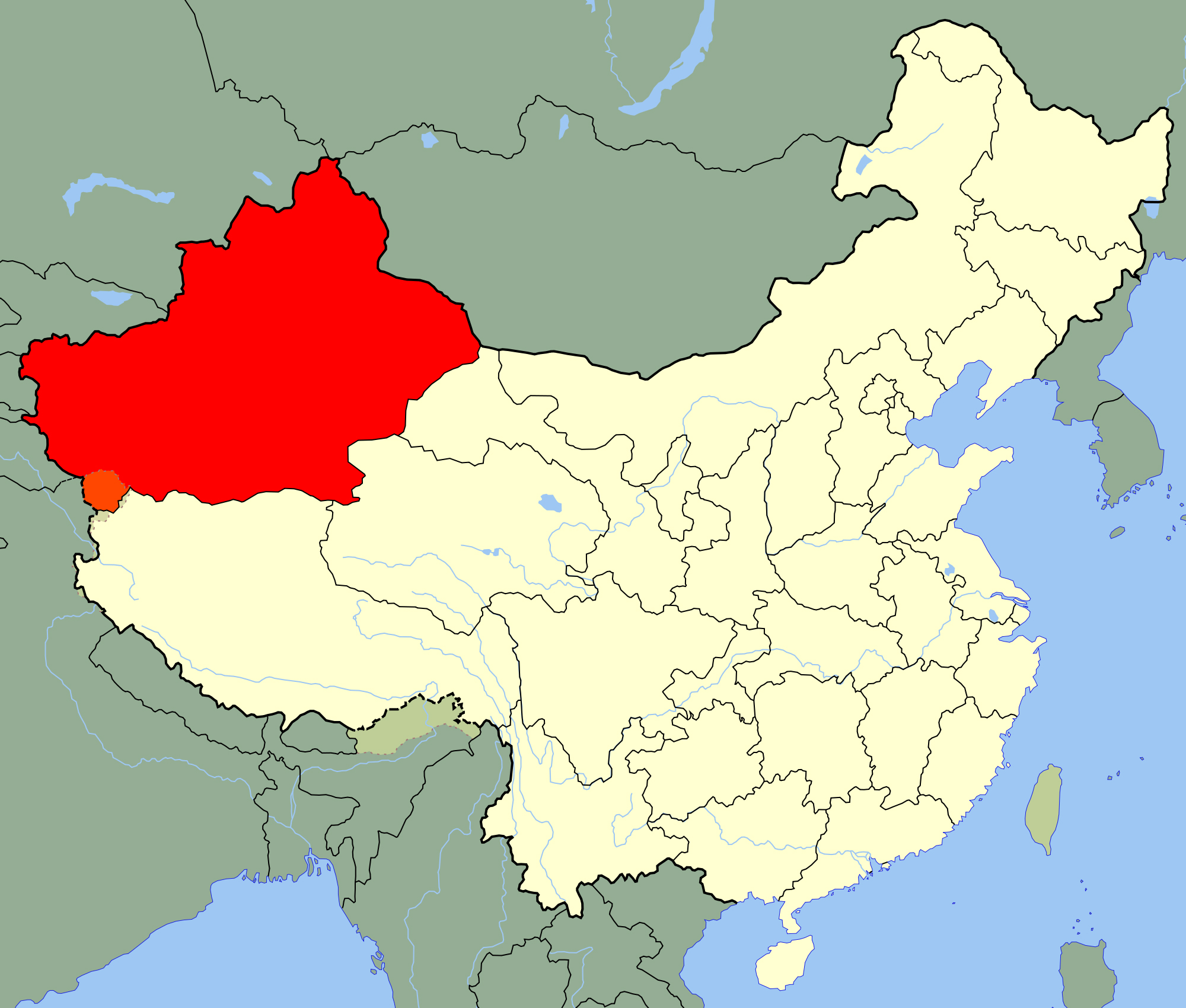 Xinjiang is the vast Muslim-majority region in China’s far west where Turkic speaking Uighur Muslims are the largest ethnic group. Under Chinese rule it has been transformed into a 1.7 million square kilometre prison. Rich in mineral wealth and almost twice the size of Pakistan, Xinjiang has assumed even greater strategic importance for the Chinese “Communist” Party (CCP) dictatorship, as president Xi Jinping’s grandiose “One Belt One Road” rolls out.

This is the regime’s master plan to head off increasing anti-globalisation pressures in the world economy and industrial overcapacity in China by linking 60 countries with a combined 40 percent of the world’s GDP to China’s economy. Xinjiang, as the gateway to the ancient Silk Road through Central Asia to Europe, is a vital piece of this jigsaw puzzle.

Xinjiang is also experiencing an unprecedented escalation of state repression in which every aspect of Uighur culture, religion and sense of a homeland is under attack. In parts or all of Xinjiang, the authorities have banned long beards, Muslim headscarves, fasting during Ramadan, and recently even certain “overly religious” children’s names. The list of proscribed names includes Muhammad, which is the most common given name in the world. Parents that choose these names are warned their children will be ineligible for ID papers, to attend school, get a job or own property.

These steps to massively extend repression in the name of rooting out terrorism – a problem largely self-inflicted due to the state’s heavy-handed measures – are also inflaming ethnic tensions within Xinjiang’s government bureaucracy. The CCP regime is alienating layers of the Uighur and Muslim elite, including sections of the security forces, which historically it has cultivated as a social base for its rule over the region.

This is shown by the recent report in the Hotan Daily newspaper that 97 Uighur officials in this southwestern part of Xinjiang have been censured for failing to show sufficient zeal in the anti-terror campaign. Their misdemeanours include failing to sufficiently record the names of participants at religious ceremonies including weddings. In one case, a Uighur official was disciplined for refusing to smoke in front of a cleric. The Global Times, a Beijing-based regime mouthpiece, quoted other officials saying it was necessary to break religious prohibitions on smoking to show “commitment to secularisation”.

In recent months the authorities in Xinjiang’s major cities – Urumqi, Hotan, Kashi and Aksu – have held a series of “anti-terrorism pledge meetings” at which huge numbers of paramilitary police are mobilised in public squares. In a ceremonial show of force these rallies avow to “maintain stability” (weiwen). More than 10,000 soldiers recently took part in one such rally in Xinjiang’s capital Urumqi.

Since the “July 5 incident” in 2009, in which around 100 were killed in a police crackdown and resulting ethnic riots in Urumqi, Xinjiang has been the main focus for repression by the Chinese regime. The region’s annual security spending has at least doubled since then. In August 2016, Chen Quanguo replaced Zhang Chunxian as Xinjiang’s top leader. The media point out that the new leader (who is Han Chinese, the dominant ethnic group, as are all provincial chiefs without exception) is replicating his role in “stability maintenance” in Tibet where he had a reputation as a hardliner.

A major initiative by Chen’s administration has been to build thousands of new “neighborhood” police stations. In Urumqi alone there are plans for 1,600 of these. The stations are only 300-500 meters apart, covering the local area with 24-hour uninterrupted patrols. A militia defence system overwhelmingly made up of Han Chinese has also been established, placing Xinjiang under a huge security and surveillance lockdown. This results in discriminatory treatment against Uighurs, but also great inconvenience for the Han who make up 38 percent of Xinjiang’s population.

In 2016, Xinjiang recruited more than 30,000 new police officers, mostly low-ranking and poorly treated contract “auxiliary” police workers. This was more than three times the number recruited the previous year. Of these 30,000 new positions almost nine-tenths were assigned to the new police stations.

Starting this year all local motor vehicles in some regions of Xinjiang will be required to have GPS transponders installed (satellite positioning devices) or their owners will not be allowed to refuel, nor will sale or purchase of such motor vehicles be allowed. Similarly, it is reported that in at least one county (Aksu Wensu) residents must take all their knives including choppers, fruit knives and scissors to designated engravers to carve their names and ID numbers on the blades. In other words, one has to go to the police to be registered before discarding a worn-out fruit knife.

In February, the telecom companies closed the 4G network except in cities with a Han majority. This has been done to slow the spread in Uighur areas of negative news stories about the government especially concerning social conflicts. After the 2009 events the internet in Xinjiang was shut down for 312 days, which took a major toll on business and economic activity.

The definition of “illegal religious activities” in China is very wide-ranging. Ostensibly this is to combat religious extremism, but it rather risks having the opposite effect. Socialists defend the freedom of religious and political beliefs. Only by eliminating dictatorship and capitalism as the causes of poverty and oppression can we eradicate violence and terrorism carried out in the name of religion.

The ruling party’s hard-line and discriminatory policies have also caused discontent among a layer of Uighur officials within the government and police. This has led to the formation of factions among Uighur officials, struggling openly or secretly against Han officials within the regional administration. Given the tradition of intense bureaucratic factionalism in China as a whole it is not surprising if some factions assume a communal or ethnic character.

Unlike the CCP’s nationalistic propaganda against the U.S., Japan and South Korea, which is a vital pillar of its rule, it is extremely nervous that the upsurge of Uighur and also Han nationalism in Xinjiang will fan ethnic conflict beyond its control. For this reason the state censors often block news of communal clashes and are accused by Han nationalists of protecting the “terrorists.”

Even the traditionally relatively harmonious relationship between the Han people and the Hui Muslims, who unlike Uighurs speak Chinese, is worsening as Hui people encounter more and more racism including an upsurge in hate speech and Islamophobia on social media.

As socialists warned the ‘anti-terror’ campaigns in Xinjiang have been used as a training ground to upgrade the methods of state repression for use against all groups that challenge the ruling clique or threaten ‘stability’. In January 2016, the regime introduced the “Anti-Terrorism Act,” widely seen as aimed at the Uighurs in Xinjiang. Uighur dissidents and others criticised the law for its extremely broad-brush approach which, coupled with the lack of even minimal judicial independence or due process, means normal ethnic, cultural and religious activities are likely to be branded terrorist activities.

Almost all political protests such as the Wukan Incident (the south China village that revolted against local corruption and land grabs) and the Hong Kong Umbrella Movement, as well as so-called “foreign-manipulated” NGO activists and lawyers are all within the scope of this law.

Socialists oppose the repressive measures of the so-called Communist Party – police raids, mass surveillance, and suspension of the internet. We defend language equality, with the right in minority regions to use one’s mother tongue in schools, workplaces and government. We support the right of self-determination of all oppressed nations (including the right to an independent state if this is the people’s choice), support the freedom of faith and cultural freedom.

But it must also be emphasised that these goals can only be achieved through a united movement of the working class to challenge the rule of the state capitalist regime and its imperialist interests in Xinjiang. This in our opinion can best be realised through a socialist confederation of China, Central Asia and Russia.

If there is no unified anti-capitalist movement of workers and poor farmers, bureaucrats and capitalist reactionaries can defeat the struggles of the Han Chinese masses under the banner of “fatherland”, as they also suppress the rights of the Xinjiang masses and other minorities in the name countering terrorism.