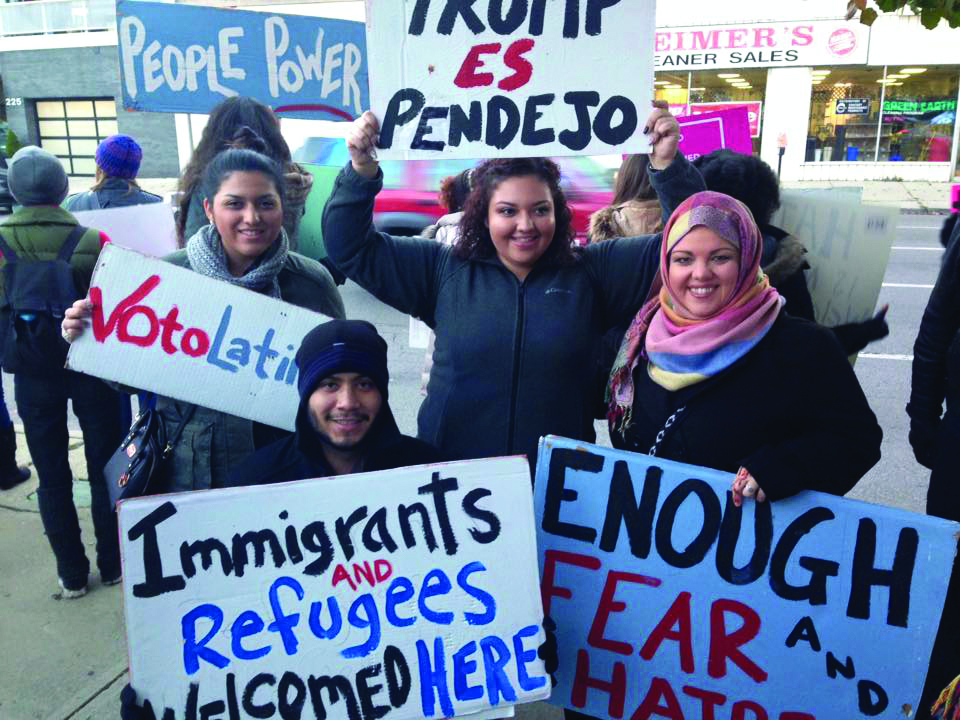 International Workers Day on May 1 is marked every year with rallies and protests organized by unions and socialists around the world. Since the historic “Day Without an Immigrant” strikes in 2006, May 1 has been a day of mass immigrant rights protests in the U.S. It is an opportunity to show our solidarity and strength as well as our resistance to the injustices of capitalism. This year, immigrants in the U.S. face a racist president who wants to destroy their livelihood, and the labor movement slogan “an injury to one is an injury to all” is more relevant than ever.

Determined protests at the airports pushed back Trump’s “Muslim ban,” and the movement also helped to defeat Trumpcare. With April’s “March for Science” and “People’s Climate March” setting the stage for rallies on May Day, the struggle against Trump’s right-wing agenda is reemerging. The ruling elites are trying to assert their control over the White House by reining in aspects of Trump’s agenda that damage the prestige of the corporate politicians, and Trump is flip-flopping on issue after issue. However, we can’t afford to be complacent.

Trump’s anti-immigrant policies, rhetoric, and deportations will continue. His administration is openly waging war on the environment. The billionaire class will eventually use Trump’s presidency as an opportunity to introduce repressive anti-union laws. The proposed budget is an onslaught of anti-worker policies, while Trump’s plans to build a wall on the Mexican border and intensify the assault on public education remain on the agenda.

Anti-immigrant rhetoric and proposals were central to Trump’s election campaign, and now he is looking to follow through with mass deportations, ICE raids, and other anti-immigrant measures. We need to build resistance beyond the actions on May Day to stop this. From the labor unions to the women’s organizations to the environmental movement, all of us who oppose Trump’s agenda need to mobilize to defend our immigrant sisters and brothers. If Trump is allowed to carry out millions of deportations, this will embolden him and the right-wing Republicans. However, if we can can deal him a defeat on his anti-immigrant policies we can knock the wind out of his bigoted, billionaire-backed agenda.

Millions of refugees and other immigrants who have fled to the U.S. would prefer not to have left their home countries. They are not just refugees of war, but also of economic devastation inflicted by capitalism’s drive to make working people, the poor and youth pay for a crisis that this system created. Budget-cutting austerity programs have gutted social services and privatized former public institutions, while the “recovery” from the global economic crisis has been shallow and mainly benefited the super-wealthy around the world. These are the conditions which lead people to flee their homes, and the U.S. billionaire class is all too often responsible for the policies leading to that devastation.

Unlike Trump, many of his big business friends are in favor of immigration as long as they can hold down immigrants as second-class citizens who face the constant threat of deportation. Marginalizing sections of the workforce helps big business to drive down wages for everyone. This situation also helps them carry out a “divide and rule” policy because it can lead to some workers born in the U.S. feeling resentful and fearful of lower wages and unemployment.

We need to understand though that this is a situation created by the billionaires and politicians, not the immigrant workers. If all workers living in the U.S. were granted full legal and citizenship rights, then it would make it harder for employers to use fear to drive down wages and benefits. With the threat of deportation lifted, all workers would be stronger together in demanding better jobs, social services, and democratic rights.

In the preparation for both International Women’s Day and May Day, there were discussions about strikes against Trump. This is a welcome and important development because it points towards the type of determined action that will be necessary to defeat Trump, and also to the potential power of working people to change society.

While neither day of international action produced mass strikes of tens of millions of people, some unions did decide to take action on May Day, and there were further discussions about the possibility of strikes. The determined tactics of disruption, civil disobedience, and strike action will be absolutely necessary to stop Trump if he moves to deport millions of people or to bust the unions.

While Republicans have spearheaded the worst attacks on immigrants, the Democratic Party leadership is not a reliable ally for immigrants. Obama deported more people than all the presidents before him combined. If Democrats really support immigrants, then they should not only block Trump’s proposals, but also help build mass rallies, protests, and strike actions. Our strategy to build a united movement against Trump and the billionaire class needs to include running candidates who fight in the interests of workers and the oppressed with demands like single-payer health care, free tuition-free college, a $15 an hour minimum wage, and an end to the deportations of immigrants. Our candidates must be connected to the movement, accountable to it, and completely independent of big business money and political control.

The problems of capitalism – from war to rampant inequality and environmental devastation – are getting worse, and we need an international movement to combat these ills. In the face of austerity programs and grotesque economic inequality in which eight rich men own as much wealth as the poorest half of the world’s population, we need fundamental change. The main levers of the economy – the richest 500 corporations – should be taken into public ownership and run democratically on the basis of workers solidarity and environmental sustainability.

A successful movement across the world for working people to control the wealth that they create could wipe out many of the conditions that force people to migrate in the first place. By breaking the power of the billionaire classes internationally, we could begin to build an alternative to the devastation and crises created by the bankrupt system of capitalism. I hope you will join us.