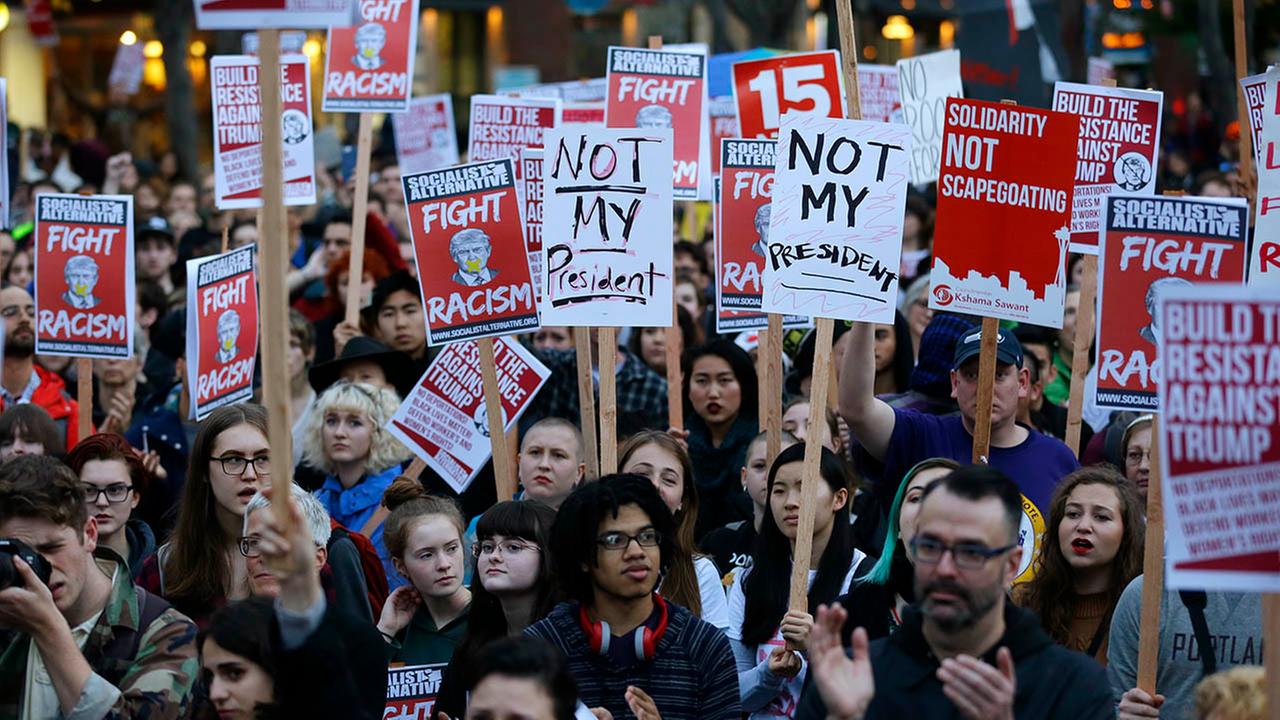 On January 20 and 21, as Donald Trump will be marching into the White House to become the new President of the United States,  millions of people will march on the streets across the world to oppose his reactionary and pro-billionaire agenda. In the US itself, our co-thinkers in Socialist Alternative, along with Socialist Students, will be organising student walk-outs and protests in at least 16 cities.

The next day, a huge “Women’s March” is planned on Washington DC, followed by a public rally which will be addressed, among others, by Socialist Alternative’s Seattle council member Kshama Sawant. These anti-Trump actions will be emulated in many countries around the world on both the 20th and 21st, with actions also taking place on 22 January in some countries. Several of these actions have been spearheaded or co-organised by the CWI and its sections. Below is a global list of the actions planned which our sections will participate in, and/or have helped to set up.

The Socialist Party (CWI in Australia) will be present in several anti-Trump protests this weekend, including a “Women’s March on Melbourne” on Saturday 21 January, 1pm, State Library of Victoria.

A “Women’s March” will take place in Vienna on 21 January, starting at Karlsplatz at 12:00. Protests will also take place on the 20th, at 3pm in Gmunden (see Facebook event here) and on the 21st at 3pm in Linz (event here).

EGA-ALS (Active Left Students, the youth and student organization of the PSL/LSP – CWI in Belgium) is organising a series of local actions, after school, on 20. On Saturday there will be a national demonstration in Brussels in solidarity with the “Women’s March”, in which the PSL/LSP will participate.

LSR (CWI in Brazil) is organising, together with PSOL and otehr Left groups, a protest at the Sao Paolo US consulate on the 20th. LSR is also working with the wider women’s movement in other protest actions around the country.

The Socialist Party and Socialist Students will hold a protest at the US embassy in London, as well as protests on university campuses, schools and colleges across the country. Details can be seen here

A “Women’s March” is planned in Paris on the 21st, starting at 2pm in Trocadero, in which Gauche Révolutionnaire (CWI in France) will participate.

SAV (CWI in Germany), together with the Left Youth of Die Linke are planning protest actions in Aachen, Bremen, Bremerhaven and a few other cities. In Berlin, a broad alliance is behind the organization of a bigger demonstration in front of the US embassy, which our comrades will be part of.

Socialist Action is planning a public meeting on the 21st. Details here

On the 21st at the Town Hall in Bangalore, there will be a public protest organised by New Socialist Alternative (CWI in India) – see Facebook event here: https://www.facebook.com/events/1419653064746234/. A protest is also planned at “Trump Towers” in Pune.

On the 20th, the Socialist Party (CWI in Ireland) is supporting and participating in a protest in Dublin City centre called by a coalition of left groups. It will take place at 5pm at the Central Bank, Dublin.

A protest is organized by the “Socialist Struggle Movement” (CWI in Isreal-Palestine), in front of the US embassy in Tel Aviv at 8pm on the 21st. See the Facebook event here https://www.facebook.com/events/1367943159895808/

An anti-Trump picket will be held by Controcorrente (CWI in Italy) in front of the US Consulate in Genoa, and another action will be organized in Salerno.

An anti-Trump march is planned on the 20th in Mexico City by Izquierda Revolucionaria and the Campaign in Defence of Public Education (CEDEP). Details here: https://www.facebook.com/events/241012696325330/

Our comrades of Alternatywa Socjalistyczna are planning a public meeting on 20 January in Krakow (details here). There are also anti-Trump protest rallies outside US diplomatic outposts, organized by women’s groups in Warsaw and in Krakow on the 21st.

On 21 January, Socialismo Revolucionario (SR – CWI in Portugal) will be taking part in a “Women March against Trump” at the US embassy in Lisbon. On Sunday 22, SR will hold a public meeting entitled “Resist Trump” (see details here https://www.facebook.com/events/1221135157968500/)

Alternative Socialiste (CWI in Quebec) will participate in a demonstration in front of the US embassy on the 20th. A public rally will be held afterwards. They also organise a protest in Quebec city on Friday.

On the 20th. WASP (CWI in South Africa) has organized a protest outside the US embassy in Joburg at 5pm.

Protests are being held at the US embassy in Madrid, and at US consulates in Barcelona and Valencia on the 21st. Protests are also taking place in Sevilla, Murcia and in Asturias on the same day. The Spanish Students’ Union “Sindicato de Estudiantes”  is organizing actions at schools and campuses all across the Spanish state to that effect. Click here for more details.

The Madrid embassy protest has been endorsed by a wide variety of left and workers’ organisations, including Podemos and Izquierda Unida, as well as the Coca Cola workers’ collective.

The United Socialist Party (CWI in Sri Lanka) will be organising a picket near the US embassy in Colombo on the 20th at 12.00.

Rättvisepartiet Socialisterna (CWI in Sweden) is part of “Red Forum”, a coalition involving other left groups, which is organising a demonstration in Stockholm at 1pm on the 21st in front of the US embassy. Protests and street events will also be held in Gothenburg, in Luleå, and some other cities.

On January 20th, Trump’s inauguration day, Movement for the 99% along with Socialist Students are organizing student walkouts and demonstrations across the United States. On January 21st, following the Women’s March, a public meeting will be hosted by Socialist Alternative in Washington DC, called “Inaugurate the Resistance”, to discuss how the 99 percent can defeat the coming wave of right wing attacks from Trump. Socialist Alternative member and Seattle councilor Kshama Sawant will be speaking there along with Jill Stein, Chris Hedges, and Chase Iron Eyes – a key indigenous leader of the fight in Standing Rock against the construction of the Dakota Access Pipeline. Details of this rally can be found on this Facebook page: