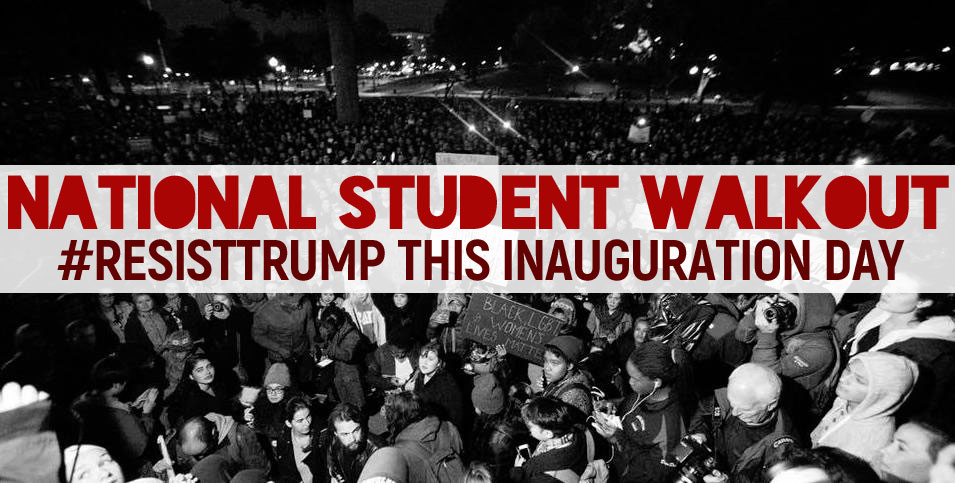 1. Our generation is under attack

If we want to defend ourselves, our generation needs to build a mass movement of resistance from day 1 of Trump’s presidency. Even before Trump takes office on January 20th, the Republican controlled Congress is preparing the most aggressive right-wing, pro-corporate agenda in modern history. In just the next couple months they want to:

Gut environmental protections, ramp up fossil fuel production, and expand pipeline construction over Indigenous lands, which will worsen the climate crisis and threaten global catastrophe for our generation.

If we let Trump divide us, singling out the most oppressed communities to attack first, eventually his billionaire government will come after us all. That’s why we have to organize the strongest possible united actions to end business as usual.

This begins with a nationally coordinated student strike on January 20th, the day Trump is Inaugurated and takes control of government. Across the country hundred of thousands of students will walk out, joining millions who will take to the streets to protest Trump’s right-wing, billionaire agenda.

3. Trump can be defeated…

Behind his bullying strongman image, Trump enters the White House as the most hated president in modern history. Polls show a majority of Americans oppose his agenda. No one denies Trump actually lost the popular vote by nearly three million, only winning because of the un-democratic Electoral College. We also have to remember that widespread voter suppression, especially in communities of color, and the lack of an inspiring alternative to Trump meant that millions stayed home on election day.

In reality, Trump has no democratic mandate for his agenda. And we can’t afford to wait until the next election to change course. If we can unite together into a powerful mass movement, we can defeat Trump, the Republican Congress, and the billionaire class.

4. …but only by building a mass movement

If this last election proved anything, it’s that we can’t rely on the corporate-backed politicians of either major party to stop Trump. If we look at history, from the Civil Rights movement to the struggle for women’s rights, it was always ordinary people getting organized and building mass movements that changed history. And young people have always been on the frontlines, taking the boldest action and advocating the most radical ideas – ideas that would later become become mainstream!

That’s why Socialist Students is getting organized in colleges and high schools across the country. We think that it’s not enough to just say “No” to Trump’s agenda. To inspire people into action, our movement needs an alternative vision that puts needs of people and the environment above the profit-driven agenda of big business. That’s why huge majorities of young people rallied behind self-declared socialist Bernie Sanders’ call for a “political revolution against the billionaire class,” but stayed home when Clinton offered only a “business-as-usual” alternative to Trump.

Building a powerful, united movement to stop Trump means not being afraid to openly demand what our communities need to live just, healthy, and dignified lives:

5. Our future depends on fighting back

Our generation is coming of age in an era of global crisis. Capitalism has created a world torn apart by inequality, wars, racism, and the corrupt domination of a billionaire elite. If we allow Trump, his billionaire friends, and the Republican Party to carry out their agenda, all the problems we already face will become far worse.

We can’t let this happen. And we can take hope in the fact that, already, millions of people across the country and around the world are beginning to wake up and take action. As young people, we’ve got to realize that we can and must take our future into our own hands. We have to get organized, help each other stay woke, and get ready to build the biggest mass movement this country has ever seen.

Let’s begin the fight back on January 20th by building the biggest national student walkout in generations!