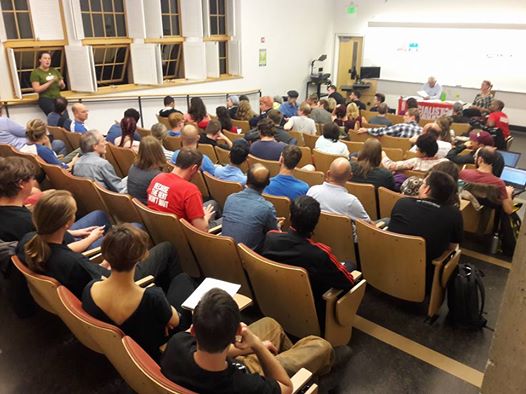 “Savage cuts are made to public services and welfare while the financial sharks in the gambling casinos of the free market are bailed out by the working class,” says Joe Higgins in the first Socialist Students event in Seattle. Joe Higgins is a member of Socialist Alternative’s sister organization, the Socialist Party in Ireland and a former member of the Irish parliament.

Higgins was referring to the attacks on working class people following the financial crisis in 2008 when ruling classes the world over forced working people and youth to pay for the crisis created by the speculators and big banks. He continued on to explain that out of the crisis and the poverty that followed, new left parties have sprung up all over Europe giving expression to the anger and frustration of  working people and youth for years of austerity and the uneven recovery that saw gains only flowing to the 1%. With the former workers’ parties of the 20th century now completely pro-corporate and submissive to the exploitative needs of capitalism, workers in distress have organized and formed new parties such as SYRIZA in Greece and Podemos in Spain.

At the same time, though, we see a rise in popularity of the far right due to the confusion of workers on who the enemy is and the inability of the new left parties to challenge the power of the corporations. As Higgins explains, the far right has won over some sections of the working class by scapegoating immigrants, Muslims, and other minority groups, diverting people’s anger away from the capitalist system and the ultra-rich who profit off of the poverty of the masses.

However, workers are also taking in the lessons of SYRIZA in Greece, that while anti-capitalist left parties are a necessary step forward for workers, these parties must put into action a program that can break with capitalism and take the struggle forward towards socialism.

The discussion after the event featured a wide range of topics. Much time was spent on the need to fight for socialism and not just a reformed version of capitalism. People pointed to the history of Socialist Alternative in fighting alongside movements that push struggle forward and win confidence-boosting gains for working people, such as the $15 minimum wage in Seattle.

And finally, many people touched on the lessons for us here in the U.S. of the developments in Europe. First of all, we can draw many parallels with the rise of left parties in Europe and the popularity of Bernie Sanders in the U.S. Also, the rise of the far right in Europe is familiar as we see the current popularity of Trump and right wing populism. We also see that Clinton and the Democrats, like the establishment politicians and capitalist parties in Europe, offer no way forward for working people.

All this points to  the need to build our own party that fights for reforms under the current system, but  also sees the need for a program to break with capitalism. Movements in Europe have developed very rapidly, and they will do so in the U.S as well. So it is absolutely crucial that people join the fight for socialism now to help put forward ideas that push these movements further towards the formation of a new equitable and sustainable society based on workers democracy.