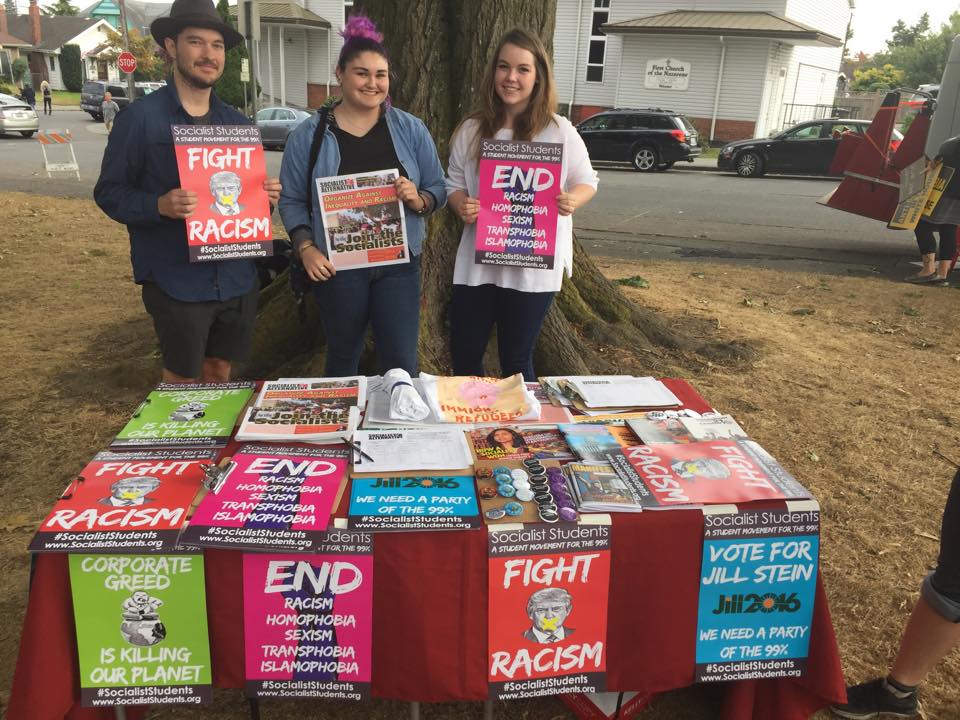 Republican nominee and bonafide bigot, Donald J. Trump, held his second Washington State rally of the summer on Tuesday at the Xfinity Arena in Everett, about 40 minutes north of downtown Seattle. Socialist Alternative members joined hundreds of other protesters to challenge the presence of the least popular establishment candidate in recent memory.

Signs read everything from “Keep Homophobia out of the White House” to “‘Fat, Ugly, Stupid, Disgusting Bitches’ for Hillary,” a reference to Trump’s sexist statements, to “Jill, Not Hill,” reflecting the growing support for Green Party candidate Jill Stein. The political polarization, even among the protesters, was plain to see.

Protesters gathered at a nearby park only a few blocks away from the entrance to the arena, and some held a press conference at which the Mayor of Everett and others spoke. Shortly thereafter, hundreds marched on the Trump rally, picketing across from rally goers and a collection of bicycle police officers from multiple Western Washington precincts. Trump supporters chanted “USA” in an attempt to drown out the protesters’ calls of “Love Trumps Hate” and “Donald Trump: Go Away! Racist, Sexist, Anti-Gay!”

The mood was tense but peaceful, even in light of a few Trump supporters who verbally harassed dissenters yelling “Dump the Chump, Vote for Trump” and other similar sentiments. Several protesters were ejected from inside the rally to the cheers of other anti-Trumpers, and two were arrested at the counter-rally.

Socialist Alternative was there in full force, with seasoned organizers, new members and socialist student representatives, selling newspapers and talking with folks of all political ideologies about building a new party of the 99%. We responded to requests for interviews from local media outlets, fielding questions that ranged from what millennials are thinking in this circus of an election season, to why third party politics are needed in a truly democratic system. We answered by underscoring the importance of an independent party of the people–a socialist political presence that will answer to the needs of working class folks who are the wind in the sails of the U.S. economy.

Fellow protesters had a range of reactions to our socialist ideas. Knowing that we do not support Democratic Party candidates who put the interests of corporations over those of working people, the individuals in charge of the anti-Trump press conference insisted that we move our table further back under the auspices that they were not in favor of endorsing any single candidate for president. Later on, they unflinchingly voiced support for Clinton.

Most challenging, perhaps, were some folks’ reaction to Socialist Alternative’s support for the candidacy of Dr. Jill Stein, whom many viewed as a surefire route to electing Trump to the White House. Though we strongly agree with the need to stop Trump, a historically grounded analysis shows that succumbing to lesser evilism and voting for Clinton is not a sound strategic move. Clinton is the epitome of Wall Street controlled establishment politics, which has given rise to the Trump phenomenon and paved the way for right-wing populism.

In the absence of a true left alternative, the strength of the far right will only grow, further alienating marginalized communities and the 99%. We explained that if the Democratic Party establishment really cared about keeping a Republican demagogue out of office, they would have thrown their support behind Bernie Sanders, who consistently polled much better against Trump than Clinton. That’s why Socialist Alternative emphasizes that building a left political alternative is the most effective way to undercut support for Trump and right-wing politics.

Many of the protesters we spoke with understood that building an independent political party that answers to working people and continuing to grow our movement is the most important thing we could do in this election season and beyond.

Others were taken with the ideas of socialism, especially when we put them in terms of real victories made for working people in Seattle–the victory in the fight for $15, the unionization drive of REI workers, and the fight for paid family leave, for example. Paper sales and interest in joining our organization were strong.

Although the state of Washington has not gone Republican in a presidential election since 1984, the turnout to see Trump speak was surprisingly robust. T he line stretched for over 10 blocks, and nearly filled the 10,000-person arena in Everett. Trump is a multi-billionaire capitalist and has time and again benefitted from the rigged economic system, but he is falsely portrayed as “political outsider.” He uses this skewed anti-establishment perception to push a racist, sexist divide-and-conquer defense of capitalism to people who have been swindled by politics as usual.

The high attendance at his rally in a solidly blue state speaks to the anger and disillusionment many working class people feel as a result of failed capitalism and the antics of Washington D.C., not the sudden move of the 99% to the far right. As we work to build an independent left that empowers the working class of this country and struggles against the oppressive systems that divide it, we must fill the space that has been created by decades of Democratic and Republican political monopoly.