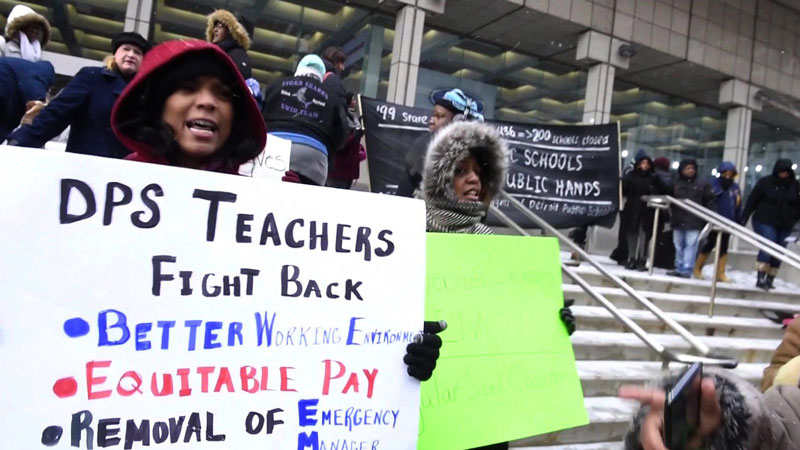 From mold and mice to overcrowded classrooms and pay cuts, DPS teachers have endured horrifying work conditions and an onslaught of austerity. Over the past few months, students and teachers have taken to social media to show the world images of their crumbling classrooms and hallways, broken equipment, and lack of books.

The most recent sickout action arose in response to the possibility that teachers wouldn’t be paid for the rest of the school year due to the District’s lack of funding. This would effectively punish teachers for the chronic underfunding of the Detroit Public Schools. As one teacher’s sign said, “Would you work for free?” Meanwhile, charter schools and state-appointed “emergency managers” have continuously siphoned money from the city’s public schools.

In the 1980s, more than 200,000 students attended the Detroit Public Schools. With the loss of manufacturing jobs, economic devastation, and subsequent decline in population, there are now just 46,000 students, more than half of whom attend charter schools. Due to a significantly smaller tax base, the Detroit Public Schools have relied on several short-term loans to stay afloat.

For several years, dramatic cuts to funding and an increased drive toward privatization has threatened public education across the country. In Detroit, Governor Rick Snyder has promoted a plan to create a new district within the city and use the old (currently existing) one to pay off its debt prior to dissolving. Many understandably believe this plan would fast-track a charter school takeover of the remainder of the city’s school system.

A recent study from Michigan State University concluded that Michigan is the 11th most unequal state in the United States. It is unacceptable Detroit’s public schools are falling apart while a handful of billionaires continue getting wealthier.

Socialist Alternative demands a tax on the billionaires to fund our schools and a serious plan to create quality public education in Detroit and in other districts across the U.S. Public education should be funded on an equal per-capita basis, regardless of community. We need to revitalize our infrastructure, ensure smaller class sizes and protect the educators who make our schools run everyday.  Likewise, we need to resist the ongoing push to privatize education and impose unaccountable charter schools on our communities.

Nationally and internationally, winning universal public education was an enormous victory for working people. If we want to protect, improve, and expand public education, we need to build a new independent movement of parents, teachers, and students inspired by the fighting example of teachers who have stood up in Detroit, Chicago and Seattle.