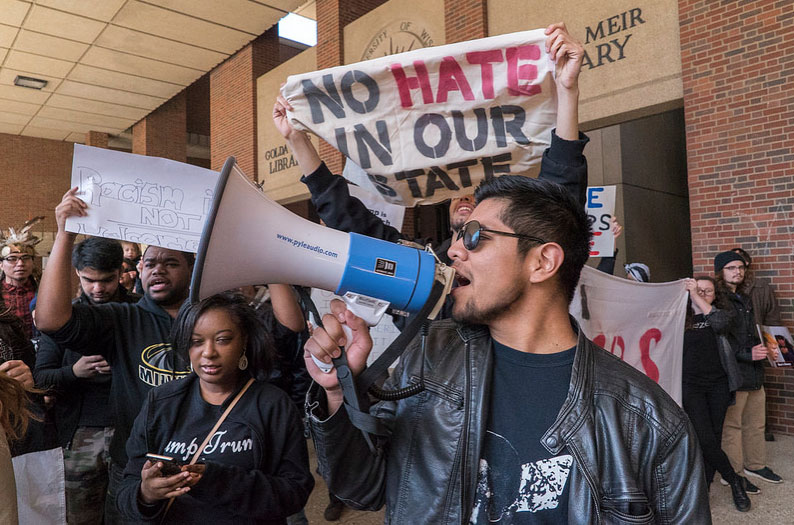 Ordinary people can defeat the Right, but doing so will require ending our subservience to the Democratic Party.

Originally published in Jacobin with the title “The Movement Route.”

The racist, right-wing ideas given new life through Donald Trump’s campaign represent a serious threat to social progress in America. But the mainstream liberal strategy to stop Trump by rallying behind Hillary Clinton’s Wall Street–sponsored candidacy is only throwing fuel on the right-populist fire.

Despite Trump’s dubious distinction as the most unpopular major party nominee in history, Clinton’s neoliberal record has helped make her the second-most unpopular (likely) nominee ever — and polls show her lead over Trump narrowing.

Meanwhile, Bernie Sanders consistently polls extremely well against Trump. Why, then, has the Democratic establishment so fiercely and undemocratically backed Clinton if their goal is to defeat Trump?

In this era of global capitalist crisis, rising inequality, and naked corporate corruption, we can only undercut right-wing populism by building solidarity around an unambiguously pro-worker, anti-establishment movement.

Before treating a disease you have to properly diagnose it. So how is it possible that such an arrogant, racist, billionaire blowhard like Trump could take the Republican nomination and come within striking distance of the presidency?

There is no doubt, as most liberal commentators emphasize, that primary blame for Trump’s ascension lies at the feet of Republican leaders who have long used racist and sexist dog whistles to misdirect the anger of white middle- and working-class communities.

Establishment GOP strategists like Karl Rove cynically cultivated religious fundamentalism and whipped up racial antagonism in the Republican voting base.

But the traditional pro–big business party leadership has lost control of the Republican base, particularly since the economic crisis and bank bailouts. The Tea Party and Trump are the GOP’s Frankensteins, emerging in part because of the anger of working people at blatantly pro-corporate policies.

What most liberal analysis misses, however, is the responsibility of the Democratic Party leadership for the rise of right-populism. Democratic leaders have long backed austerity, “free trade,” anti-union legislation, and regressive tax policies — the result of which has been historic levels of inequality and unemployment, and the decimation of the working class.

Yet until Sanders’s candidacy, the Democratic Party establishment had muzzled every serious attempt to give voice to a left political alternative for working people.

It is no accident that the Tea Party sprung up after the no-strings-attached bank bailouts in 2008 and 2009. First President Bush and then President Obama doled out $14 trillion in corporate handouts and zero-interest loans, all while millions of working people were thrown into unemployment, poverty, and desperation. Instead of going to jail, the authors of the Wall Street collapse paid themselves huge bonuses.

Labor and left leaders tacitly supported these massive corporate giveaways, paying deference to Obama and the Democratic Party instead of organizing mass protests for a people’s bailout.

This allowed the Tea Party an open field to capture most of the popular outrage at Wall Street, propelling them to sweeping gains in the 2010 elections.

These movements shifted public consciousness toward economic inequality, injected class politics into the political sphere, and cut across popular support for the Tea Party and their battle lines of nationalism, hate, and bigotry.

Yet at the very same moment, the pro–Wall Street politicians and insiders running the Democratic Party were making working people pay for the economic crisis by imposing austerity at the national, state, and municipal levels.

Central in the corporate complicity of the Democratic establishment has been Clinton herself. Not only did Hillary support the bailouts, she has long been an advocate for the party’s anti-worker trade deals and neoliberal policies.

Today, despite the enormous popularity of Sanders’s message, Clinton and the Democratic establishment are ignoring Sanders supporters and doubling down on their strategy of silencing dissent.

This has given Trump an opening to appeal to Sanders’s base by attacking Wall Street and opposing “free trade” deals. And in his dishonest posturing as the defender of workers’ living standards against corporate greed, he has a perfect pro-Wall Street foil: Hillary Clinton.

The way forward could not be clearer.

Recent polls show widespread discontent with the political establishment in both major parties and the key institutions of American capitalism. In this context, hitching labor and social movements to the Clinton bandwagon would only strengthen the forces behind Trump.

It would give Trump a virtual monopoly over the anti-establishment vote and silence left-wing voices in the general election — exactly when millions of the most politically alienated begin paying attention.

Already we see the disgraceful spectacle of labor and progressive leaders covering up Clinton’s pro-corporate record in an attempt to motivate their base to vote. Such tactics only demoralize, disorganize, and alienate their rank-and-file, further opening the door for the far right.

Even if Trump loses the election, forcing the Left behind Clinton would harden and expand the base for racist, sexist, and nationalist forces.

That’s a central reason why tens of thousands have signed my petition calling on Sanders to continue running through November as an independent, or by appealing to the Greens to join Jill Stein on their ballot line.

As I have argued in previous articles, there are ways Sanders could run in spite of his expressed concern about the danger of a Trump presidency.

If polls indicated Trump could be within striking distance in the general election, Sanders could choose whether to continue his campaign in key swing states, while running all-out in the remaining states.

Sanders would not need to win the election to provide a left, anti-establishment alternative and cut into Trump’s potential voting base. Even more importantly, such a run could be used to launch a new mass party of the 99 percent.

Unfortunately, it appears Sanders will not take this step, instead pushing the utopian dream of reforming a Democratic Party whose undemocratic leadership and structures have blocked and sabotaged his efforts at every stage.

Aworking-class strategy to fight Trump and the far right is essential whether or not Sanders runs through November. The most important thing is for labor and social movements to offer a left, anti-establishment political vision.

We will need to get organized to fight for this vision. The victories already won by Fight for 15 and Black Lives Matter show what is possible.

We can build on the protests that have already taken place nationally against Trump, and launch massive peaceful protests wherever he goes. These protests can unite working people, students, people of color, unions, and everyone else terrified by the rise of Trump.

Our movement can also take up the demands popularized by Sanders’s campaign and organize en masse for free college tuition, an end to mass incarceration, Medicare for all, and a national $15 minimum wage.

In the immediate term, our most important challenge is to reach out to the millions mobilized by Sanders’s “political revolution” and convince them to organize themselves into an independent movement rather than back Hillary Clinton.

Important flashpoints will be the mass protests planned for the Republican and Democratic National Conventions in July and August. If the organized labor and social movement forces behind Sanders put their weight behind the RNC and DNC protests, they could be huge — highlighting the mass opposition to Trump while asserting the Left’s independence from Clinton.

We will need to combine an unrelenting critique of Trump’s bigotry with a sharp critique of the corporate domination of both the Republican and Democratic parties.

Jill Stein’s Green Party campaign will likely offer the strongest left challenge in November and deserves the broadest possible support, even as we raise the vision for building a new mass party of the 99 percent.

The past few decades of bipartisan attacks on working people and the environment have laid bare the need for independence from big business and its two parties.

What we need is not party unity inside a party dominated by the billionaire class, but rather to build the independent strength and unity of the working class and all oppressed people.

No political revolution can succeed that starts and stops in an election year, or that tones down its demands so as not to embarrass whatever Wall Street–blessed Democrat is running for office.

There are no shortcuts. Ordinary people can defeat the Right, but doing so will require ending our subservience to the Democratic Party.

To fully succeed we need to get organized and build our own party, a party of the 99 percent, that will fight alongside progressive movements, rather than against them.

Warmongers Whipping Up a Dangerous Situation in Ukraine