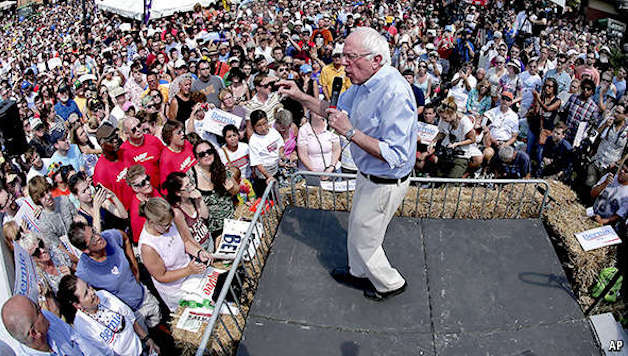 Why Demands to Endorse Hillary Must Be Rejected

A growing chorus of voices is declaring the Democratic Primary over, and calling on Sandernistas to dutifully line up behind Hillary.

Unfortunately, the pundits are right about the mathematics. Sanders would need more than 64% of remaining delegates to take the lead. It would require a political bombshell to turn things around, especially with so many closed primaries where independents are shut out of this rigged process. And even with a majority, Bernie would still face the undemocratic brick wall of the establishment’s hand-picked crew of superdelegates.

But while the media establishment may be right about the numbers, they’re dead wrong about Sanders supporters flipping for Clinton. To throw our support behind Hillary’s corporate campaign would be to sabotage our political revolution.

At the same time the Clintons and Democratic establishment are cracking their whips for “party unity,” we’re also hearing Bernie Sanders shifting his political messaging away from winning and from political revolution. “[This] campaign,” Sanders said, “is going to the Democratic National Convention in Philadelphia with as many delegates as possible to fight for a progressive party platform.” This statement is just one of a number of recent comments showing a fundamental change in approach.

With all due respect to Bernie and his campaign, I think to reduce our struggle to a question of party platform and of pushing Hillary to the left would be a fundamental mistake. In reality, the Democratic Party platform is next to meaningless. There are no rules, or even a custom, of elected Democrats respecting the party platform when it comes to real world votes. And Hillary Clinton herself is a thoroughly pro-corporate politician who has the full support and backing of Wall Street and the billionaire class.

To endorse Hillary, even with a more progressive platform, would be the opposite of political revolution and would abandon all the vital energy and momentum we have built over this historic past year.

We simply can’t afford to make this mistake. That’s why I have launched a petition calling on Bernie Sanders to run all the way to November as an independent, and to use his campaign as a launch pad for a new political party of the 99%.

If Bernie’s only concern is that running independently could open the door to a President Trump, then why could he not at least campaign in the 40+ states where it’s generally clear the Democratic or Republican candidate will win? Even in this way, while not putting his name on the ballot in the 5-10 closely contested “swing states,” he could still run an historic campaign if linked to building a new party. It could lay the foundation for an ongoing mass political movement to run hundreds of left candidates for all levels of government, independent of corporate cash. He wouldn’t need to win this election to effect a sustained leftward shift in US politics.

But the threat of Donald Trump’s racist, Islamophobic, misogynist, right-populist message is all too real. For that reason also, Bernie should run as an independent rather than allow Trump to have a monopoly over the anti-establishment vote. The failure of the left to organize and stand up against the bailouts of Wall Street is what opened the door for the Tea Party, which effectively tapped into that genuine anger. Millions of independents and Republicans who would vote for Bernie, will instead choose Trump’s right populism if their only alternative is Clinton’s corporate politics. Even if Trump doesn’t win, whatever traction he gets will feed into an ongoing base for right-wing ideas.

Bernie’s campaign has transformed the political discussion in the U.S. It has put forward a fundamentally different vision, basing itself on the needs of the 99%, instead of the greed of billionaires, and on expanding social services, rather than cutting them. His demands for Medicare for all, for free college education, for serious campaign finance reform, and for a $15 minimum wage, are the real heart of the campaign. They are what has galvanized these historic mass rallies and unprecedented grassroots fundraising. They have emboldened a new generation of young people looking for an alternative to the failure of corporate politics and capitalism.

Leaving aside Hillary Clinton’s recent maneuvering around the $15 minimum wage, it’s crystal clear she does not support any of the core issues we have fought for. She will not bite the corporate hands that feed her political career.

The Clintonian era which began under Bill Clinton in the 1990s was marked by the Democratic Party’s open advocacy and implementation of neoliberalism, as a continuation of the “trickle down” ideas of Ronald Reagan and George H.W. Bush. The Clinton administration passed devastating policies like NAFTA, with its brutal effects on workers and the environment; the 1994 crime bill with its dramatic expansion of incarceration; and the destruction of welfare with its inhuman effects on the poor and particularly single mothers. Such laws were part of an overall agenda of attacks on social services and on the interests of the working class and people of color. Bill and Hillary Clinton were political partners in that process, as they are political partners in Hillary’s election campaign today.

As a U.S. Senator, Clinton voted for the Iraq War, the Patriot Act, the Patriot Act re-authorization, for new “free trade” deals (including the 2008 Panama agreement which helped perfect it as a tax haven), for bank deregulation, the Wall Street bailouts (TARP), the 2006 border fence legislation, and the list goes on. As Secretary of State she was perhaps the administration’s most aggressive proponent for interventions in Libya and Syria that fueled the humanitarian crisis in the region. She acted as a global spokesperson for fracking, and in spite of considerable pressure from Sanders has not backed down from this environmentally devastating practice.

Hillary won the admiration of Bloomberg Businessweek for her corporate advocacy as Secretary, noting that “Clinton turned the State Department into a machine for promoting U.S. business,” and sought “to install herself as the government’s highest-ranking business lobbyist.”

How can anyone seriously argue that we can continue our political revolution by supporting one of the highest profile opponents of that revolution, who has essentially vowed that the things we’re fighting for will “never ever happen”? Hillary Clinton’s actual policies will not be rooted in whatever platform is passed at the convention, but will be based instead on her own neoliberal politics and on the influence of Wall Street and the billionaire class that have funded her campaign. In fact, the Clinton camp has already responded to Sanders, rejecting attempts to push Hillary to the left.

Of course it’s not only about Hillary. The Democratic Party leadershipalso doesn’t support any of these core issues we’re fighting for. There is a reason only 1 Democratic U.S. Senator has endorsed Bernie, while 40 have endorsed Hillary. Further, in the House of Representatives, there are 188 Democrats, with the “left” organized into the Congressional Progressive Caucus (CPC), which has about 71 members. Even with these 71 most progressive Democrats, only 4 have endorsed Sanders, less than 6% of the CPC and just 2% of the House Democrats overall.

Bernie’s politics are completely unacceptable to the Democratic Party leadership. That’s why I urged Bernie to run as an independent before he launched his campaign.

The 1% politics of this party are not new. The Democratic Party, originally the party of the slave owners, has long been funded and controlled by big business. The gains that have been won through it, such as the New Deal and Great Society programs, were won under intense political pressure from working people. FDR originally ran for the presidency on a message of fiscal austerity, and his tune only changed due to the deepening of the economic crisis and the militant movement of labor activists and socialists that erupted on his watch. In fact, he defended his policies to business people as necessary concessions to mass movements, saying: “I’m the best friend American capitalism ever had.”

Sanders has himself been raising the following question in recent speeches: “The Democratic Party has to reach a fundamental conclusion: Are we on the side of working people or big-money interests?” This goes to the heart of the matter. In my view, turning the Democratic Party – with all its undemocratic structures and anti-democratic leadership – into a party that serves the interests of working people is essentially impossible. While launching a new party may seem intimidating to some, it is in fact far more realistic than attempting to fix this corporate-controlled one. At best, putting our resources in this direction is a long detour from the conclusion that must be reached: we need our own party, independent of corporate cash and corporate influence.

We have entered into what is one of the most favorable moments to build a new progressive political party in the history of the United States. There is unprecedented mass anger at the political establishment, and widespread disillusionment with the leadership of both political parties. A recent study found that independents will soon outnumber registered Democrats and Republicans put together.

If Bernie were to call a national conference to discuss launching a new party, thousands of people would attend. There is nothing stopping Sanders, if he agreed.

Does he agree at this moment? No, that much is clear.

But it’s also clear that Bernie has been influenced by our movement before. Before launching his presidential campaign he supported raising the minimum wage but hadn’t endorsed the demand for 15. Our movement convinced him to. When he first launched his campaign he did not have a strong platform on institutional racism. Black Lives Matter activists pushed him forward again here, and improved his campaign.

The question of what comes next is not just for Bernie.

As Bernie himself has maintained from the beginning, one person alone cannot carry out a revolution against the billionaire class. It’s even embedded in his campaign slogan: “Not me, Us.”

It is our right, I would say our responsibility, to try to push him forward on this critical issue, which will help decide to what degree this movement is sustained or co-opted.

We need a tool, an organized force, to win Medicare for All, free college education, to end mass incarceration, and further to build a democratic socialist society based on the needs of ordinary people and the environment. No one is going to hand it to us, we need to rely on our own independent strength and organization to make it happen.

For that, we need more than just one candidate. We need our own political party, that fights alongside social movements and labor, and that is prepared to unequivocally stand up against the billionaire class and “welcome their contempt.” We must reject the Democratic establishment’s demands for “party unity” inside of a party owned and controlled by Wall Street. We need unity of ordinary people, by starting to build a new party of, by, and for the 99%.

Sign #Movement4Bernie’s petition calling on Bernie to run all the way and launch a new party of the 99%.