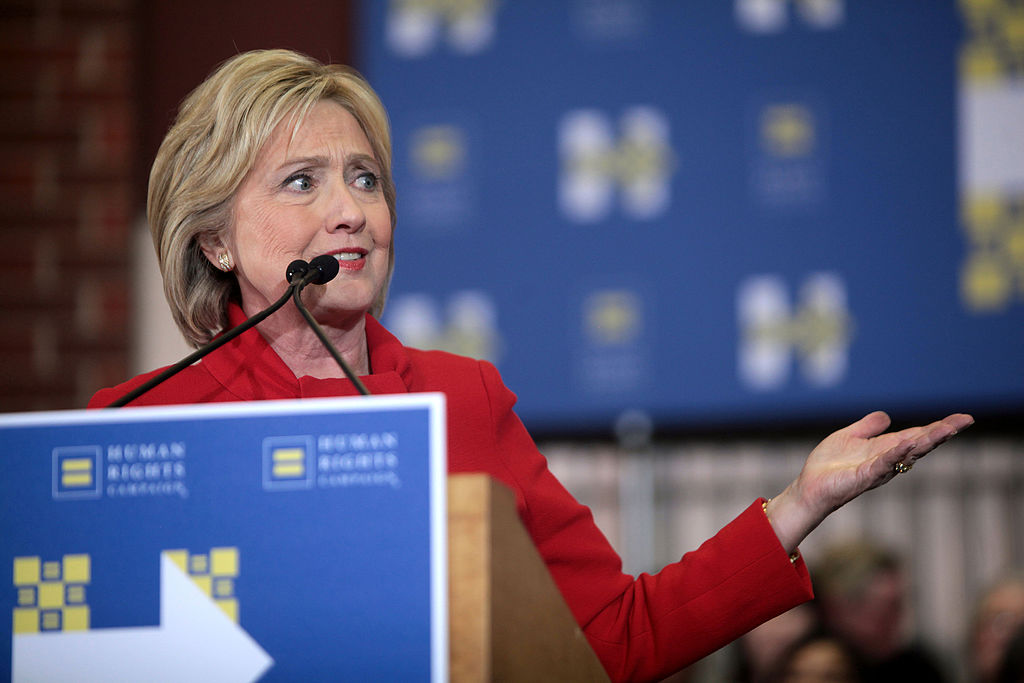 Originally published on Counterpunch on April 12, 2016

Despite a decisive victory Tuesday providing further confirmation of her likely nomination, in many respects Hillary Clinton emerges from the New York primary more damaged, her party more divided, than she entered it.

What came to be called The Battle of New York has served only to further expose what millions of people in the U.S. are becoming painfully aware of – the Democratic Party primary is rigged in favor of the establishment.

A discussion which started with the top-down superdelegate system and enormous influence of corporate money in politics, has gone on to raise awareness about the generally undemocratic nature of the Democratic primary and party itself – with its myriad of anti-democratic voting rules, frontloading of conservative states, heavy tilting of the playing field by the media establishment, and antagonistic role of Democratic Party leaders towards grassroots challengers like Sanders.

Before yesterday’s primary even began, more than 27% of New Yorkers (3 million people) were excluded by restrictive voting laws as well as the removal of previously registered voters identified as “inactive.” In one Brooklyn precinct, officials said 10% of those who showed up to vote found their names had been purged. In the county in which Brooklyn resides, more than 125,000 voters had been cut from the Democratic rolls, leading to a massive 14% drop of eligible voters in 5 months time.

Meanwhile, in upstate New York polling station hours were substantially cut back in areas more favorable to Sanders. On top of all this, in a rule hardly anyone was aware of, only voters who registered as Democrats by last October 9th were eligible to vote. New York City Mayor Bill de Blasio felt compelled to comment, “The perception that numerous voters may have been disenfranchised undermines the integrity of the entire electoral process, and must be fixed.” The city’s comptroller vowed to “undertake an audit of the operations and management of the Board of Elections.”

While Clinton’s 15-point margin of victory is almost certainly greater than the sum of irregularities, it is equally clear that if independents and others wrongly excluded could vote, the outcome would have been far closer and Sanders might even have won.

Closed primaries like New York’s are broadly unfavorable to grassroots challenges, purging from the process the millions of people registered as independent who have already drawn conclusions about the corrupt character of both parties.

The power of the New York media establishment was on full display during the primary as it declared open war on Sanders. Even “progressive” papers like the New York Daily News went all out, repeatedly running sensationalized, libelous front-page attacks on him.

Perhaps the most important result of the New York primary was not the vote, but the political impact of Sanders’ campaign on the tens of thousands actively involved or closely watching over the past days and weeks.

National corporate media have weighed in heavily on behalf of Clinton throughout the primary process. First with a virtual media blackout in 2015, while Clinton was portrayed as the inevitable nominee and Trump received more than 20 times the media coverage. But as Sanders became more clearly a threat, the media establishment went all out trying to discredit him. From endless attacks on his policy proposals by prominent liberal figures like Paul Krugman, to onslaughts like that of the Washington Post on March 1, where they published one anti-Sanders article an hour for 16 hours.

Voting irregularities have also popped up in state after state. While some were undoubtedly exaggerated, others had real effects. In Arizona, where there were five-hour lines at the polls, many people also saw their voter registrations switched without their knowledge.

The primary as a whole is heavily skewed toward older, wealthier party loyalists. Nationally less than 15% of eligible voters will participate in the Democratic primaries and caucuses.

Working people have seen the pro-corporate character of the Democratic Party leadership itself on full display. It is no accident that when Democratic Senator Jeff Merkley came out to endorse Bernie Sanders last week, he was the very first Senator to do so. By comparison, 40 Senators have come out for Hillary, along with 166 House Representatives. To this establishment, Sander’s call for a political revolution against billionaires and wealthy campaign donors is utterly unacceptable. This Democratic leadership bases itself on the exchange of favors and on a revolving door of influence between elected positions and lucrative corporate and lobbyist careers. Meanwhile they use their weight and influence to whip labor, and church leaders into line.

Add to this the combined power of Wall Street Super PACs and you have a primary and political party which is hostile terrain for a candidate of the 99%.

One simple fact reveals the rigged character of the system: National polls consistently show Bernie Sanders enjoys, by far, the highest favorability rating of all presidential candidates, and beats out all Republicans in head-to-head match-ups. Yet he will very likely be eliminated before the general election if he plays by the rules of the two-party system.

We are entering what is possibly the most favorable moment in U.S. history to launch a new left party. Public trust is collapsing in both major parties, the establishment media, and all the key institutions propping up American capitalism. Eight years since the Great Recession, with most workers still suffering despite the recovery on Wall Street, all the built-up anger and discontent is expressing itself in a bitter revolt against establishment Democratic and Republican leaders.

This is the context for the dramatic rise of Bernie Sanders who has run, by any measure, the strongest distinctly left-wing presidential campaign in American history since Eugene Debs (though Debs, who ran on the Socialist Party ticket, was clear about corporate America’s domination over the Democratic Party and did not make the fundamental mistake of running within that party) . Beginning his campaign with no name recognition, polling 3%, and without any elected figures of national significance backing him, Bernie has won more votes, more state primaries, raised more money, and mobilized more volunteers than any comparable left challenge in the Democratic Party’s history.

He has done all that with a genuinely left-wing platform, refusing corporate donations, embracing the socialist label, and making the call for “a political revolution against the billionaire class” his central slogan.

Even by the standards of mainstream politics, the strength of Sanders campaign is breathtaking. Clinton began the election with what, on paper, appeared set to be among the most formidable corporate election machines ever assembled. Yet in the last three months, with an average donation of $27, Sanders has tapped his expanding base of small donors – now over two million strong – to raise dramatically more than Clinton. In March alone Sanders raised $44 million to Clinton’s $29.5 million.

Just a year ago, every self-respecting mainstream pundit was still peddling the myth that no candidate refusing corporate contributions could be electorally viable, much less a candidate calling themselves a socialist! That idea is now dead.

No one can deny the potential for building a nationally viable left political party, completely independent of corporate cash, putting forward unapologetically left, working class policies. The only remaining question is one of leadership: will Sanders take the initiative and, if not, will the forces behind him pull it together?

“I believe that we need to think very seriously, particularly as folks of color and progressives, about building either a new party or a new movement…”

Approaching the same question from the opposite political standpoint, Paul Krugman’s April 8th New York Times column echoed Shaun King’s insight that a new party is emerging “right before our very eyes.” Krugman warns Bernie to tone down his attacks on Clinton or risk a deeper rupture from the Democratic Party, arrogantly asking: “Is Mr. Sanders positioning himself to join the ‘Bernie or bust’ crowd…? If not, what does he think he’s doing?”

Both Krugman and King are right. The stronger Bernie’s “political revolution against the billionaire class” has become, the more it has threatened to break out of the straightjacket imposed by the Democratic Party which, in the end, is completely dominated by big business.

That’s why my organization, Socialist Alternative, and #Movement4Bernie are petitioning Bernie to continue running through November as an independent or on the Green Party ticket with Jill Stein, if he is blocked in the rigged primary process, and to call a conference to discuss launching a new party of the 99%.

If there are concerns about helping elect a Republican, there is no reason Bernie could not at least run in the 40+ states where it’s absolutely clear the Democratic or Republican candidate will win, while not putting his name on the 5-10 closely contested “swing states.” This could still allow for a historic campaign if linked to building a new party for the 99% and laying the foundation for an ongoing mass political movement to run hundreds of left candidates for all levels of government, independent of corporate cash.

On the other hand, if despite all their dirty tricks against him, Sanders remains loyal to the Democratic Party and backs Clinton in the general election, it would mean the demoralization and disorganization of much of our movement. Yes, we need a strategy to push back right-wing Republicans, but collapsing the anti-establishment movement behind Bernie into the Clinton campaign – a false unity with the candidate of Wall Street and the political establishment – would leave the field wide open for right-populists like Trump or Cruz to expand their base.

If Sanders chooses that path, continuing the political revolution will mean Sandernistas boldly moving beyond Bernie.

It’s time to break the rules. An aggressive independent campaign for president by Bernie Sanders, linked to building a new mass party for the 99%, could dramatically transform American politics. Bernie would not need to win the election to force a decisive leftward shift in U.S. society. Even registering a vote of 10 or 15 million for a new party (and the potential exists to win a far larger vote) could strike a crippling blow to the political monopoly of the two parties of American capitalism.

Around the world, where workers have won far-reaching reforms, like single-payer healthcare or free education or paid parental leave, it’s been through forming mass workers parties. In Canada, for example, trade unions launched the New Democratic Party with socialized medicine as their central demand. They won less than 15% of the national vote, and were blamed for tipping the vote to the conservatives, but to cut across the growth of the New Democratic Party, that conservative government granted Canadian workers their central demand – and Canada’s system of socialized medicine was born.

On the other hand, if Sanders drops out and endorses Clinton after the primaries, the Democratic Party will be free to tack right in the general election, relying on fear of the Republicans to keep their progressive base in line.

The stakes are simply too high to let this moment slip through our fingers. Capitalism is plunging humanity into a social and ecological catastrophe. Bernie’s campaign shows a viable fightback is possible. What’s missing is a strategy to sustain and grow our movement. Now is the time for bold action to build a fighting, working class political alternative – a party for the millions, not the millionaires.

Sign #Movement4Bernie’s petition calling on Bernie to run all the way and launch a new party of the 99%.