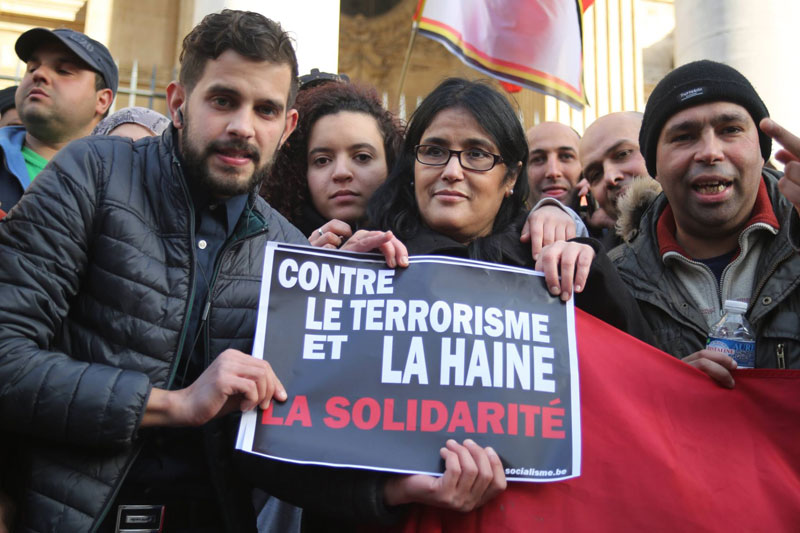 This statement is from Linkse Socialistische Partij/Parti Socialiste de Lutte (CWI Belgium) which Socialist Alternative is in political solidarity with.

Dozens of dead and wounded. A country in shock. That is the result of the terrible terrorist attacks in Zaventem airport and Maelbeek metro station in Brussels on 22 March. We express our condolences to the victims, their families and friends.

The victims, once again, are ordinary people. This terrible, barbaric violence was completely random. Authorities have shut Brussels down. Thousands are trapped in the capital, worried about their children and relatives.

Like after the attacks on Charlie Hebdo, or the November attacks in Paris, there are spontaneous expressions of solidarity. Taxi drivers offering free services. People opening their homes to those who are stranded by the failure of public transport. The solidarity of ordinary people is huge, like after every disaster.

The perpetrators are likely members or sympathisers of Islamic State, which also pursues its reactionary regime of terror against the population in Iraq and Syria.

Belgian foreign policy reinforces the risk of attacks. This summer, Belgium will start participating in military interventions in Syria, as it did previously in Iraq and Afghanistan.

Bombing Syria will inevitably mean more random victims, which will not improve security here or there. On the contrary.

These wars are the bosses’ wars – by and for the benefit of local and international profiteers, politicians and warlords. The victims, however, are always from our side: the side of the workers, the poor, and the young, both here and in the Middle East.

We call on all trade unions, workers and young people to participate in the national demonstration against Belgian participation in the war in Syria and the purchase of fighter planes.

The capitalist system is in a deep crisis. It undermines the prospects for growing numbers in society. This prepares the ground for terrorism and other reactionary violence.

We fight for a world where the enormous wealth currently in the hands of a very small minority is used for the needs of the majority: socialism. Then we can once and for all consign poverty, misery, war, hatred and terrorism to the dustbin of history.

More analysis of the aftermath of the Brussels bombings and the way forward for the Belgian and international working class in opposing terrorism, wars and poverty, will be published on socialistworld.net over the next days.

Solidarity with the Lebanese People: Bring Down the Corrupt Elite!