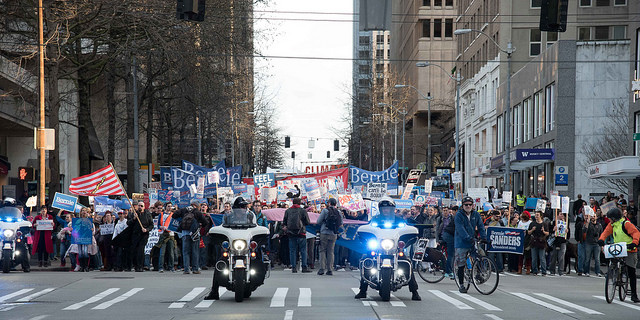 700 people marched on February 27th at Seattle’s March For Bernie, as part of the national day of action in more than 75 cities around the US.

Seattle’s socialist city councilmember, Kshama Sawant, addressed the powerful rally following the march, and spoke about the enormous support for Bernie’s call for a political revolution and the importance of building the #Movement4Bernie. But Kshama also noted the disappointing results for Sanders in South Carolina and likelihood of big gains for Clinton on Super Tuesday. She concluded by calling on Bernie to run all the way to the general election in November, whether as a Democrat or an independent. “We cannot allow our movement and Bernie’s movement, to be imprisoned within the two party corporate and capitalist establishment … We need a party of the 99%!”

Kshama Sawant: Why I Settled the Ethics Complaint On My Support for Tax Amazon

Stand with Kshama Sawant – Defend the Right to Protest!