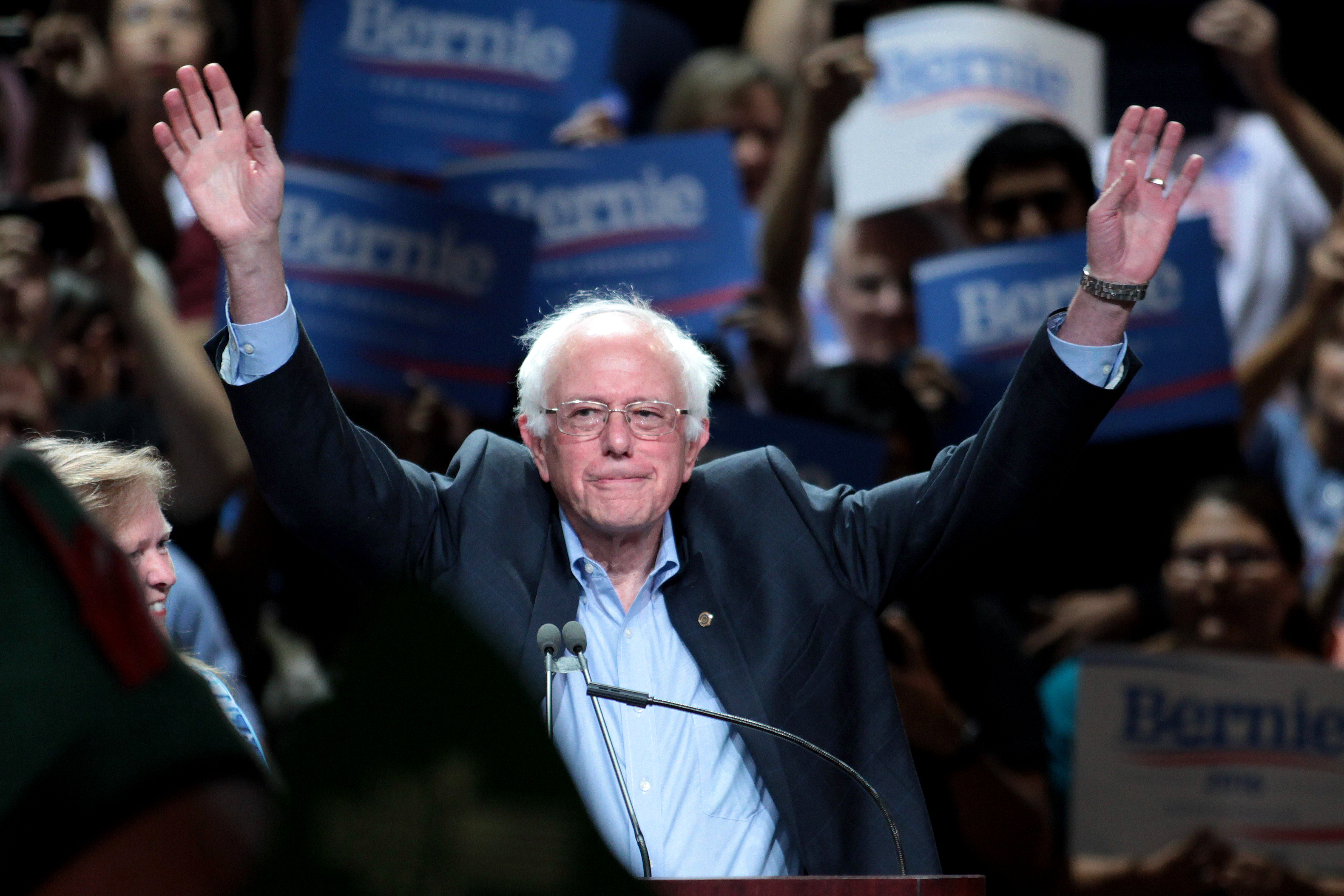 The results are in. Iowa Democrats and Republicans went to the caucuses yesterday and rejected the establishment’s picks.

The Democratic caucuses were so close that neither candidate won a majority of the vote. The New York Times reports that “The close results were deeply unnerving to Mrs. Clinton and her husband, former President Bill Clinton, as well as her advisers, some of whom had expressed confidence in recent days that they had recaptured momentum…” This political upheaval against the pro-big business party leadership will continue to unfold and will give further momentum to the Sanders campaign.

For a candidate openly calling himself a “democratic socialist” who was 40 points behind Clinton a year ago, this result marks a victory for Bernie Sanders. His message for a political revolution against the billionaire class interrupted the coronation of Clinton as head of a Wall Street-dominated party. The Sanders campaign is inspiring young people and working class people to get active and fight to elect a candidate standing up for their interests.

On the Republican side, Ted Cruz, a Tea Party favorite, came out on top with 27.6%, beating Donald Trump. The only establishment candidate who outperformed expectations is Marco Rubio, who appears to have separated himself from the rest of the pack, winning a close third place with 23%. He will use this strong showing to present himself as the champion of the pro-big-business wing of the Republican Party.

Predicted record turnouts to the caucuses, especially on the Republican side, were largely realized. Exit polls show that the high turnout was driven mainly by Trump and Sanders supporters who explicitly wanted outsider candidates – yet more evidence of the enthusiasm and attention that Trump on the right, and Sanders on the left, are generating.

This polarization does not only exist in Iowa. Working people all over the U.S. are looking for alternatives to the broken political system. On the right, the growth of sexist, racist, and anti-immigrant ideas presents a real threat and needs to be answered. However, despite the incessant media focus on Trump, Sanders’ result reflects the generalized move to the left in U.S. society. This shift in the past period is also seen in the massive impact  of the “Black Lives Matter” movement, the victories for LGBTQ equality, and the progress of the fight for $15 an hour minimum wage campaigns.

What Next in the Democratic Primaries?

The impact of the Iowa results and Sanders’ likely win in New Hampshire next week will affect subsequent primaries. The standard media narrative is that in Nevada and South Carolina, still to vote before “Super Tuesday,” states with larger non-white populations than Iowa and New Hampshire, will be much tougher terrain for Sanders. But Sanders’ support in the black community is growing fast and is intersecting a growing revolt against a Democratic establishment which pretends to have an anti-racist agenda while presiding over mass incarceration and police brutality. In addition, polls reveal Sanders’ massive popularity with young people, especially young women. The growing support for Bernie in this demographic, mere months ago considered a stronghold of the Clinton campaign, is just another symptom of the profound mistrust and anger against the corporate political system and its corporate candidates. All told, Sanders has real possibilities of doing well in a number of upcoming primaries.

Strong results for Sanders will push the Democratic Party establishment towards increasingly overt hostility towards Sanders. This is already starting to happen. As Sanders wins delegates and the media is forced to take his campaign seriously, policies like a $15 an hour minimum wage seem less pie in the sky and more realizable to more Americans despite establishment hostility and pushback by liberal commentators like Paul Krugman, economist and New York Times columnist.

Yet there should be no illusions on how difficult it will be for Sanders to win the nomination against the massive resources of the Democratic establishment and the corporate media. It will take building a movement truly independent of the Democratic Party machine to defeat it. It is important that recent polls showing Sanders would defeat Trump by a bigger margin than Clinton are undermining her claim to be more electable. But the Democratic leadership and establishment will not accept having a candidate who refuses corporate money and stands for key reforms in the interests of working people and will do everything in their power to prevent this outcome.  Just this past week Nancy Pelosi said Elizabeth Warren does not represent the Democratic Party following Warren’s comments that the party has not done enough to curb Wall Street.

The Democratic Party establishment will point to the threat represented by Trump and Cruz as a reason to rally behind Clinton, along with continuing attacks on Sanders as unelectable and too far left by liberal figures like Paul Krugman. To combat these arguments, Sanders supporters who want to win his program and win the nomination will need to organize independently from the Democratic establishment to fight for Sanders’ “political revolution.” Let’s build the #Movement4Bernie that Kshama Sawant and Socialist Alternative have launched – independent of corporate cash, independent of the Democratic Party machine.

GOP Polarized to the Right

In the Republican Party, the continued rightward trajectory of its base has meant that Cruz, Trump, Carson, and Paul collectively demolished the establishment corporate candidates by 66% to 27%. This reflects the degree to which the whole process has gotten out of the establishment’s control. Most revealing – the corporate darling, Jeb Bush, who has a Super PAC with over $100 million in it, received barely 3% and was beaten by outsiders Ben Carson and Rand Paul. It appears that Iowa voters have positioned Rubio over Bush as the corporate Republican candidate for the leading circles of that party to rally behind.  Rubio did gain significant momentum in Iowa, and if the anti-establishment vote continues to be split between Trump and Cruz, this may represent a path to victory for Rubio and the Republican establishment. But let’s be clear: Rubio is no moderate. For example, he opposes abortion rights even after rape and incest, and has pledged to roll back marriage equality.

Ted Cruz is celebrating a surprise victory based on building a strong ground game in Iowa, which he calculated would favor him and his religious fundamentalist politics. Interestingly, while Cruz won big with regular caucus goers, Trump was heavily popular with first-time caucus goers who put a premium on their candidate being an “outsider.” Registered Republicans in Iowa have a history of being conservative and religious, often skewing the Republican primary debate toward issues that matter to that demographic. However, in previous elections, GOP victors in Iowa have often failed to win the nomination: in 2008, Mike Huckabee took Iowa while in 2012 Rick Santorum barely beat out eventual nominee Mitt Romney. In national polls, Trump still enjoys 15-point leads over Cruz.

Ordinary Iowans have spoken and in large numbers have rejected corporate mainstream politics. Political space is opening for the left to use to build an independent party that unapologetically fights for working people. Otherwise, the threat from the right wing, with its misogyny, racism, and pro-business populism, will grow.

If Sanders wins in New Hampshire next week as polls predict, on top of his impressive showing in Iowa, his “political revolution against the billionaire class” could gain momentum. While young people and progressive workers grow more and more excited, the political establishment will step up its attacks against Sanders and his platform. The Democratic Party establishment will prove, by its actions, that winning Sanders’ platform is not possible through their party – further alienating a new generation who will increasingly search for answers outside the two-party system.

This is why Socialist Alternative and #Movement4Bernie are calling for building a new party of the 99%. While Bernie has repeatedly and mistakenly said he would support Hillary if he loses, we see in his campaign the outlines of a desperately needed, new left political force in American society.