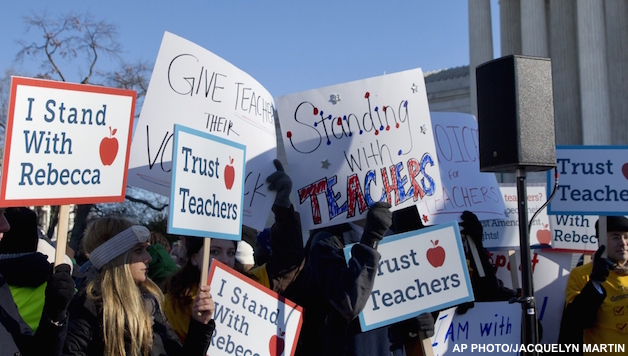 The explosive growth of the Wisconsin demonstrations in 2011 from  thousands to tens of thousands, the dogged defense of the occupation of the Capitol, and the outpouring of solidarity from across the country and around the world revealed the willingness of American workers to fight and gave some insight into the character of the future resistance of the U.S. working class.

It also illustrated some of the obstacles to rebuilding a militant working-class movement: the union leadership’s readiness to concede without a decisive fight and the spinelessness of their Democratic “allies,” revealed at every turn. The battle was lost because the union leadership had no strategy to fight corporate interests and no political alternative to the Democrats. And, critically, there was no sizeable organized left in the unions which could demonstrate a strategy to fight back and defeat the attacks.

Employers have spent decades reorganizing the workplace and the economy to protect themselves and their profits from the power of organized labor. Their paid-for politicians rewrote the tax code and criminalized effective union tactics. They moved unionized manufacturing jobs to low-wage, nonunion locations and created low-wage, nonunion precarious jobs in the U.S. economy.

The corporate media and right-wing ideologues then dialed up the rhetoric aimed at these low-wage taxpayers against the “privileges” enjoyed by public-sector workers on their dime, that is, their tax dollar. Now, union dues are being interpreted as “speech” by the courts. The latest volley in this battle, Friedrichs v. California Teachers Association, is now in front of the U.S. Supreme Court. It revolves around the issue of “fair share,” or agency, fees charged to nonmembers represented by a union to cover the basic expenses of representing nonmembers in contract negotiations and disciplinary proceedings, services which the union is legally obliged to provide.

“Right to work” refers to states, sectors, or industries where the unions are barred from collecting these fees, but not freed from the obligation to represent the free-riders. In the 2014 case, Harris v. Quinn, the Supreme Court ruled that unions do not have the right to assess agency fees from home health workers in Illinois, but the ruling did not extend beyond that specific group of workers. The decision in the Friedrichs case, due by June, is expected to be applied to unionized public workers in the 25 states where fair share is still legal, reversing the Court’s 1977 decision Abood v. Detroit Board of Education.

The elimination of agency fees will significantly undermine public-sector unions: their ability to negotiate contracts, to represent their members, and to organize new workers. Those who argue that the elimination of agency fees will strengthen the unions by forcing them to work harder for nonmember support conveniently ignore the facts: the South and Southwest have been largely “right-to-work” since shortly after the 1947 implementation of the Taft-Hartley Act prohibited the “closed shop,” and they remain largely union-free to this day, despite the heroic efforts of workers and unions there.

Billionaires on the Offensive

Agency fees are not the right’s only target. Pensions are currently in their cross-hairs, threatening the well-being of seniors in states like Illinois and California and cities like Philadelphia. And not just public pensions: a provision in the federal spending bill for 2015 allows multi-employer pensions to cut the benefits of retirees currently collecting benefits, historically considered sacrosanct.

Nor do the threats come simply from the right. The Trans Pacific Partnership (TPP) pushed by President Obama and the Chamber of Commerce, and up for a vote in Congress in coming months, poses a direct threat to union jobs, labor protections, and the environment.

What Is to Be Done?

Resistance develops in the space between expectations and the experience of reality. While the media touts the economic recovery and record corporate profits, income and wealth disparities have reached levels not seen since the 19th century Robber Barons smoked cigars in top hats and tail coats. Fast-food workers in New York City plunged into that void in December 2012 with the bold demand for a $15 an hour minimum wage and a union. Low-wage workers across the country took up the call, walking off the job and risking arrest in national days of action.

With militarized police murdering black men and women, seemingly leaving them without recourse, black youth jumped into that void when they refused to back down and go home in Ferguson, New York City, Baltimore, Minneapolis, Chicago, and elsewhere.

Budget cuts, layoffs, privatization, and the attacks on public-sector unions – specifically their right to strike – combined to create a perfect storm in public education. In 2012, Chicago teachers forged a coalition with students and parents and struck. This December, they again voted overwhelmingly to authorize a strike, if it becomes necessary. Seattle teachers struck for a week in September and won significant gains!

There are also courageous struggles for immigrant rights, in defense of women’s reproductive rights, and for gender equality and LGBTQ rights, but a fighting labor movement is critical to uniting all these struggles with the social power of working people into a mighty challenge to corporate rule. A new leadership needs to be built which can transform unions into fighting organizations. This must also include organizing for  an independent working-class political party. Kshama Sawant’s election and re-election as a socialist city councilmember in Seattle show what can be done on the local level. This should be replicated in cities and states across the country. Now, Bernie Sanders’ campaign is engaging hundreds of thousands new to politics, and we must make the most of this opportunity to create a new organization in its wake. As a first step, the union movement needs to unite with activists from other movements to put up a determined public struggle to defeat TPP and the huge attack on union rights represented by the Friedrichs case.