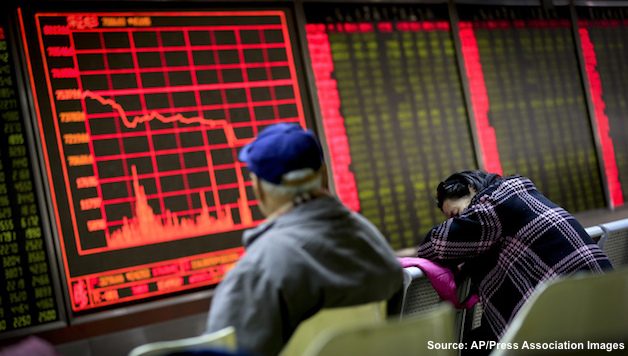 Could the financial turmoil of the opening week set the tone for 2016?

Global financial markets started 2016 with a bang! A reprise of last summer’s chaotic falls on China’s stock markets triggered panic selling of shares, commodities and currencies around the world. The first six trading days for China’s Shanghai and Shenzhen markets saw the total value of the market shrink by 15 percent, a loss of US$1 trillion. Worldwide, US$4 trillion was wiped from stock markets as China fears spread. The world’s biggest stock market, New York, fell 6.2 percent in the first week of the year, its worst start ever.

Does this set the tone for the world economy in 2016? The capitalist George Soros is among those predicting another financial crisis like in 2008.

China is the world’s second largest economy and biggest trading nation. The sharp slowdown that started two years ago in the Chinese economy has already brought profound crises to several countries that depend on commodity trade with China. This is clear in Brazil, facing its deepest downturn since the 1930s. The capitalists’ increasing concern over China is also about its falling currency, the yuan, which could trigger a currency war, and about the huge and growing Chinese debt.

Last summer, China’s stock market fell a record 45 percent. The Chinese regime, which in the preceding months had celebrated the rising stock market and proclaimed they were in control, were seen to be powerless. The actions they took to arrest that fall, including a ban on the sale of many shares, has now blown back at them. As the time limit approached, worried company executives wanted at all costs to offload these shares, which created the wave of selling on the opening day of the year. The authorities have now extended the sales ban. If the Chinese stock market falls by a further three percentage points it will pass the lowest point reached last year, in August.

While stock markets offer only a limited guide to processes in the real economy, and China’s stock market is widely dismissed as a ‘casino’ (although that could be said of all of them), the fresh outbreak of financial panic is rooted in real problems. The world economy has achieved only the most fragile of ‘recoveries’ from the deep crisis of 2008, while its imbalances have become more extreme. The Chinese economy, now the epicentre of global instability, is experiencing a much sharper and more complicated downturn than its leaders have publicly acknowledged.

The most immediate risk facing the Chinese economy is escalating capital flight and the fall of its currency, the yuan. As its economy slows, the Chinese economy has paid a crippling price for keeping its currency pegged – through a succession of different exchange mechanisms – to the US dollar. This has cancelled out Beijing’s efforts to stimulate growth by cutting interest rates and injecting more liquidity into the economy – cash that is leaving almost as fast as the central bank can pump it in. The authorities are caught in a dilemma: the more the currency falls the faster capital is escaping overseas to ‘safety’. Yet the central bank’s efforts to hold up the value of the yuan have seen it burning through its foreign exchange reserves at an incredible pace.

The yuan has fallen by 6 percent against the US dollar since last August, including 2 percent so far this year. Many commentators are convinced the yuan will depreciate further because its current level against a rising dollar cannot be sustained. The regime wants to achieve a gradual devaluation but market forces are disrupting this plan. Global financial markets increasingly fear the Chinese regime could be pressured into a bigger devaluation or even lose control over the currency.

Ironically, this comes after the yuan was promoted to the status of official reserve currency by the International Monetary Fund last November, and China’s president Xi Jinping solemnly declared the currency’s value would be kept stable.

Beijing has spent massively to prevent the currency falling too much. December witnessed the largest monthly outflow ever from China’s foreign exchange reserves, double the previous record, and the equivalent of 130-140 billion dollars. Mostly this is due to the central bank’s defence of the currency; the rest is depreciation of non-dollar assets held by the central bank. China’s foreign exchange reserves have shrunk from $4 trillion to $3.3 trillion since mid-2014, approaching therefore the minimum identified by the IMF – $2.6 trillion – which the country needs.

A falling yuan will inevitably be followed by devaluations in other countries, especially in Asia where most economies rank China as their number one trading partner. Currencies will be written down to avoid losing competitiveness vis-a-vis China. But weaker currencies will also increase the cost of repaying debts.

The Chinese regime was praised even by economists in the West for having alleviated the world economic crisis of 2008-09 with massive public investments. The cost of these policies is clear today with enormous overcapacity and in particular the rapid accumulation of debt. Official estimates say China’s total debt increased from 160 percent of GDP in 2008 to 250 percent last year.

A corresponding increase in debt has occurred in most of the “emerging markets”. An important factor is the quantitative easing policies that the US central bank, the Federal Reserve, and other central banks – Japan, Britain, the EU – implemented. Some of the thousands of billions of dollars that central banks handed out have ended up as debts in South Korea, Indonesia, India, etc. There are estimates that companies, cities, and provinces in China, Brazil, Mexico, and other countries, have through issuing bonds assumed liabilities equal to the national debt in these countries.

When the Fed in December raised US benchmark interest rates for the first time in nine years, this meant global capital flows would turn back toward the United States. This has a huge effect on both currencies and debts, which is why the Fed didn’t do it earlier. This time, the small US rate increase has already had negative consequences.

The Chinese economy’s slower growth has been the main factor behind drastically lower commodity prices. Of the 46 commodities monitored by the World Bank, the price of 42 of them is now at the lowest level since the early 1980s. Oil prices are continuing to fall, even as tensions in the Middle East are rising, and began the week at $32 per barrel. Most forecasters are cutting their forecasts for oil prices in 2016, with Morgan Stanley predicting $20 per barrel. Falling oil revenues have pushed many oil producing countries into recession, stoking political unrest from Saudi Arabia to Venezuela.

China’s current growth rate is judged by an increasing number of economists at around 4 percent rather than the 6.5 percent per year that Xi Jinping says is needed by 2020. Li Wei, chairman of the Chinese government’s influential Development Research Centre, said in a speech at the weekend that he thinks 6.5 percent will be difficult to achieve. An editorial comment by the official Xinhua News Agency warns that 2016 looks like “a very difficult year” involving “unavoidable pain”.

Xinhua quotes an unnamed authoritative figure who warns that after the downturn, “an L-shaped growth period will be more likely” rather than “a V-shaped”, i.e. no real recovery. But still the downturn shows no sign of ending.

China’s debt burden – particularly in the corporate sector and local governments – is now consuming almost all new credit in the economy just to keep it rolling over. China is therefore becoming a bigger and more unstable version of Japan, in the sense that large parts of the Chinese economy are now ‘zombified’ and can only produce more debt, rather than offering profitable investment opportunities. This also explains the rush by the moneyed elite to get their capital out. Credit ratings agency Fitch puts capital flight from China since the second quarter of 2014 at the staggering level of $1 trillion.

Xi Jinping is attempting a neo-liberal economic transition to restore profits and ‘confidence’, by closing down ‘zombie’ companies and further cutting the share of GDP that goes to the working class. State media report that 3.5 million jobs will be axed this year in heavy industries. At the same time, the regime talks about creating a consumer-driven economy as its new growth engine, but this is based mainly upon the affluent layers of the middle class, not the masses whose salaries cannot sustain ‘consumerism’.

Xi’s transition agenda, however, keeps getting stuck because – of course – these neo-liberal remedies will aggravate the economic downturn in the short-term, even threatening to tip the economy into a full-blown recession. While the liberal sections of China’s state controlled media are urging the government to bite the bullet and embrace economic “pain”, it is hesitant and with good reason. Not only could this road lead to massive social unrest, it is also a process the regime could lose control of.

There are already clear signs of a loss of control, which is another factor unnerving global markets. We saw this with last summer’s comedy of errors: a botched devaluation and misfiring market rescue policies. Now we see the same thing with the decision to abandon – after just four days – the ‘circuit breakers’ that were supposed to make the stock market less volatile.

Although it is too early to say whether Soros’s prediction of a financial crisis in the short-term will materialise, the risks have undoubtedly increased during the first weeks of 2016. Politicians and capitalists have no answer to capitalism’s crises and this includes the dictatorship in Beijing.