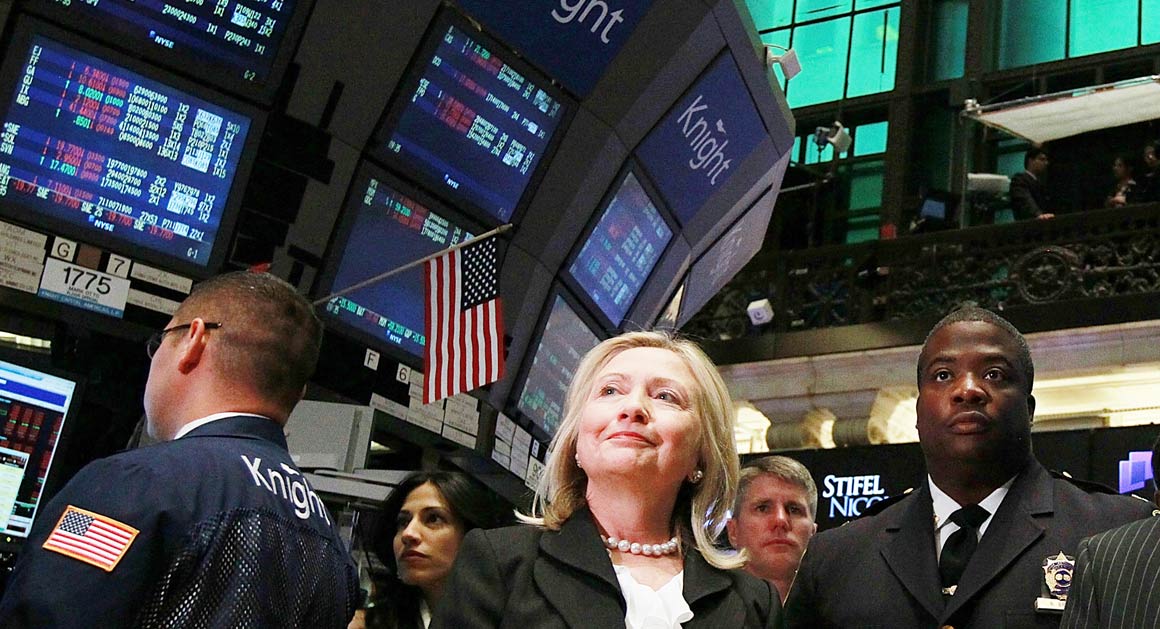 Bernie Sanders’ campaign calls for a political revolution against the billionaire class. He is rejecting all corporate money, and he said during the November 14 debate: “Here’s my promise: Wall Street representatives will not be in my cabinet!” Bernie’s openness to fighting back against a system where political and economic decisions are dictated by the billionaire class has had an electrifying effect on working class and young voters.

Hillary is trying to package herself as Bernie-lite. She recently said to The Late Show, “We’ve got to get back to providing opportunities, we’ve got to get back to making the economy work for everybody, and we have to defend the progress we’ve made in women’s rights and gay rights, and we have to protect voting and immigrant rights and everything else.”

While Hillary is trying her hardest to rebrand herself and pull the wool over people’s eyes, the stark underlying difference is shown by their campaign contributions. While Hillary’s campaign is awash in corporate money, with Wall Street topping the charts, Bernie is rejecting big business contributions, relying instead on over 800,000 small donors and counting. So why is big business lining up behind Hillary if she’s a born again progressive? Ample reasons can be found in Hillary’s long political history, which speaks much louder than any progressive proclamations made on her website.

During Bill Clinton’s presidency, where Bill and Hillary always worked very much as a team, the road was paved for the deregulation of the financial market, which helped lead to the 2008 crisis. So when Hillary started her own political career, she had the instant backing of Wall Street. Her current campaign website declares that “Wall Street Should Work for Main Street,” but when the banks collapsed in 2008, she sold out “Main Street” by voting for the bank bailouts. To date, her top five donors are Citigroup, Goldman Sachs, DLA Piper (a corporate law firm), JPMorgan Chase, and Morgan Stanley (OpenSecrets.org).

Hillary now claims that, as president, she would have the strongest program to hold Wall Street accountable, but would Wall Street executives be lining up behind her if they believed that were true? The investment industry has already given Hillary a total of $5.5 million during this election campaign alone.

As a Senator, Hillary not only voted for Bush’s Iraq War, but distinguished herself as a fierce advocate for it. She voted for the Patriot Act both times, helping to build the basis for the surveillance state we now have. As Secretary of State, Hillary consistently supported U.S. “allies,” no matter how oppressive. During the Arab Spring, Hillary supported the brutal dictatorships of Tunisia, Egypt, Yemen, and Bahrain against the peaceful pro-democracy uprisings in those countries.

Attacks on the Poor

Perhaps the strongest progressive narrative around Hillary is that she is a populist fighter who for decades has been an advocate for families and children. Does this line up with her record?

When it comes to helping low-income families, Hillary supported the repeal of welfare. She talked about undeserving, lazy parents to justify gutting the program. But, whatever she thinks about the parents, the reality is that 70% of the recipients of this program were innocent children who were left with limited or no benefits. This one act, arguably, did more harm to families and children in the U.S. than anything else in recent history.

Hillary helped Bill campaign for the “tough on crime” laws that created the mass incarceration system we have now. “We need more police,” she said in 1994. “We need more and tougher prison sentences for repeat offenders. The ‘three strikes and you’re out’ for violent offenders has to be part of the plan. We need more prisons to keep violent offenders for as long as it takes to keep them off the streets” (Salon.com, 4/13/2015). This has resulted in the highest prison incarceration rate in the world, and there are almost six million ex-felons who are deprived of their voting rights and face discrimination when seeking jobs and housing.

Many people are unaware of the instrumental role that Hillary and Bill played in building our current system of mass incarceration. Pushing harsher and harsher penalties for crimes related to poverty resulted in what many refer to as “The New Jim Crow,” where currently 1 in 3 black men will go to prison at some point in their lifetimes.

Fighter for the Oppressed?

When it comes to the rights of LGBTQ people, Hillary says she is a fighter for gay rights, but as late as 2013 she maintained that marriage was between a man and a woman (The Atlantic, 6/13/2014). As regards the rights of undocumented workers, Hillary now says that she supports a pathway to citizenship, but in 2006 she voted for a Republicanbacked bill to build a 700-mile wall on the U.S.-Mexico border.

In another one of her numerous flip-flops in this electoral race, Clinton recently announced that she is opposed to the Keystone XL pipeline. But as late as July 2015, she was still undecided on this widely despised project. Two big Canadian banks who are key investors in Keystone XL paid Clinton over $1.6 million in speaking fees from 2014-2015, giving her ample reason to remain undecided until it was too late for her opinion to make a difference.

This isn’t Hillary’s first time reinventing her stances on issues. During her presidential bid in 2008, Barack Obama called her out during a debate for her opportunist flip-flop on NAFTA. “The fact is, she was saying great things about NAFTA until she started running for president,” he said. As Secretary of State, Hillary then went on to support the Trans-Pacific Partnership (TPP), which has been called “NAFTA on steroids.” She has spoken over 45 times in support of TPP over a five-year period before recently changing her stance.

Hillary is the only Democratic candidate not supporting a $15 an hour minimum wage; instead, she only calls for $12. This reluctance is consistent with Hillary Clinton’s record on the Walmart Board of Directors from 1986-1992, when she did nothing to raise the wages of workers or combat the company’s unionbusting practices. While Hillary would like to pretend her Walmart days are behind her, her current campaign treasurer, Jose Villarreal, is a Walmart insider who was on their Executive Advisory Council until 2013.

While Hillary Clinton looks progressive in comparison to anyone in the Republican race, she has a long history of showing that she is not the candidate able to fight back against the advances of the right wing. It was disappointments with Obama that opened the door for Republican gains. Obama had promised to offer a change from the Bush administration, yet he packed his cabinet with Wall Street bankers. If elected, we won’t get the new, progressive-looking Hillary Clinton. We will get what she has always delivered: a Hillary who serves the interests of Wall Street and the 1% over the needs of working people.