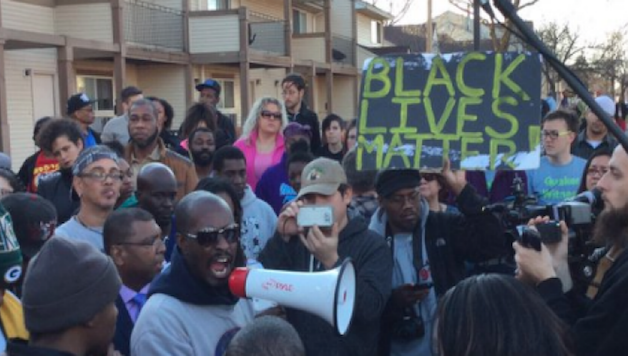 “Our city is not too far from burning like Baltimore because as the violence, disparities, and erasure of people of color grows, so will the people’s rage and desire for justice,” said Michael McDowell, an organizer with Black Lives Matter Minneapolis.

The racist police shooting of Jamar Clark must be a line in the sand. It’s time for a major escalation of struggle until we get #Justice4Jamar and win real structural change to the racist criminal justice system that continues to destroy black and brown lives in our communities.

“From witness accounts, Jamar Clark was handcuffed and then shot in the head in front of dozens of witnesses,” said Nekima Levy-Pounds, president of the Minneapolis NAACP. “Police essentially threw a corpse in the back of an ambulance, and put him on life support at the hospital. They pulled guns on witnesses and sprayed them with mace… This is one of the worst examples of what we’ve seen, recently, with the execution of unarmed black men.”

On Sunday night, hundreds gathered at the site of the shooting in North Minneapolis. Black Lives Matter Minneapolis led a march to the nearby 4th Precinct police station, beginning an occupation of the precinct entryway and an encampment outside. On Monday hundreds of protesters shut down Interstate 94 during evening rush hour, with 50 arrested.

Despite rain and near-freezing temperatures, the #‎4thPrecinctShutdown grew Monday and continued into Tuesday. Underscoring the popular support for the movement, so far city officials have not felt the political room to send in police to reclaim their precinct station! For updates and upcoming actions, follow Black Lives Matter Minneapolis on Facebook and Twitter.

Socialist Alternative is urging an all-out community mobilization to get #Justice4Jamar and in support of Black Lives Matter Minneapolis, whose demands include:

The shooting of Jamar Clark comes amid rising conflict in Minneapolis over city leaders’ refusal to seriously address deepening racial inequities or undertake serious police reform. Minneapolis Mayor Betsy Hodges was elected in 2013 promising to prioritize combating our worst-in-the-nation racial inequalities in income, education, healthcare, and other areas. However, after two years, Hodges is facing increasing criticism for the City’s failure to take serious action. In October, facing pressure from business, the mayor backed down on previous promises to fight for a workers’ rights agenda in Minneapolis pushed by a broad coalition of racial justice and labor organizations, provoking further anger.

At a Sunday press conference with the police chief, Mayor Hodges urged patience as the Minnesota Bureau of Criminal Apprehension investigated. BLM leaders rightly responded that they had no trust in local law enforcement investigating themselves. Facing escalating protests and a torrent of online criticism, Hodges reversed herself within 24 hours, echoing protesters’ call for a federal investigation.

This is a big step forward, and shows the power of our movement, but is no guarantee of real justice. The federal Department of Justice has a long history of protecting the interests of big business and the political establishment. As Baltimore and so many other examples show, only a powerful movement capable of forcing the hand of the political establishment and the racist legal system can ensure justice. Structural changes to law enforcement, like the call for locally elected community boards with full powers over the police, must remain a central demand.

Since the Ferguson uprising 15 months ago, the movement against racism and police violence has transformed the entire national debate and again demonstrated the power of protest. Yet apart from a few partial victories, the system of mass incarceration and structural racism in American remains fully intact. There is a growing dialogue within the movement over a strategy to take the fight forward and, especially in Minneapolis, there is growing recognition of the need to link up the fight against police racism with a wider workers’ rights and racial equity agenda, including the fight for $15.

More than most other cities, Black Lives Matter in Minnesota has closely allied themselves with the wider labor-community coalition that has mobilized hundreds of low-wage workers, most of them Black and Latino, to demand Minneapolis City Council pass a $15/hour minimum wage, paid sick days, fair scheduling, and stronger enforcement against rampant wage theft. Forging these wider alliances and championing class demands that unite low-wage workers of color with the wider workers movement has helped broaden support for Black Lives Matter Minneapolis and for the struggle against police racism here. There are powerful lessons in Minneapolis for both BLM and the labor movement nationally.

In Minneapolis and nationally, Socialist Alternative members have helped lead the 15 Now movement, and our members have been active in the fight against police racism, consistently aiming to build bridges between them. Through this experience, we have made a number of contributions to the ongoing dialogue on crafting a winning strategy to fight police racism and win fundamental change, including articles here and here.

In the days ahead we urge all our supporters in Minnesota to join with Black Lives Matter Minneapolis and other forces in organizing the strongest possible protest movement to ensure #Justice4Jamar. For those outside Minnesota, be alert for solidarity actions and consider making a donation to the BLM Minneapolis legal defense fund.

When we fight, we win!