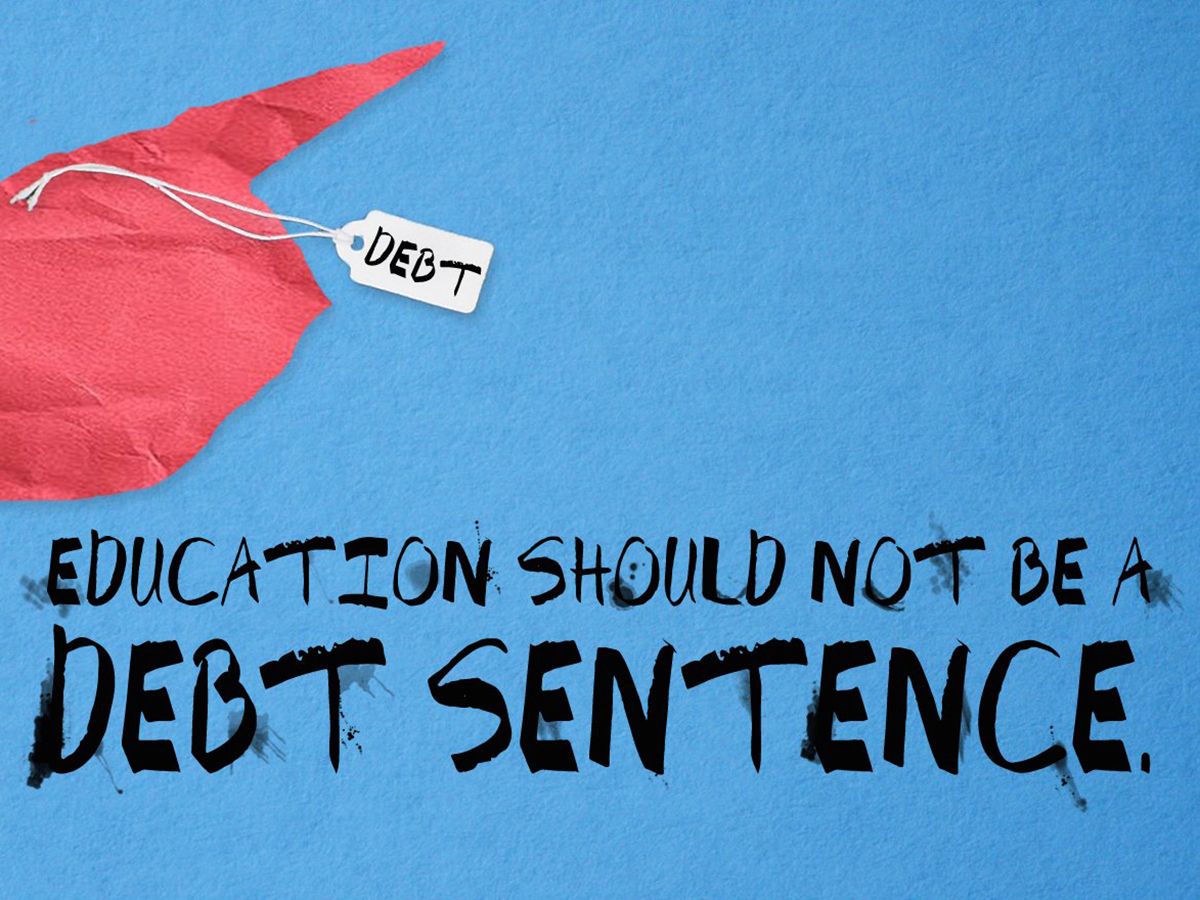 There is a growing crisis in the United States, created by unsustainable levels of student debt and the corporate model of higher education. Tuition at private and public universities nationwide is skyrocketing, and huge numbers of students are graduating terrified, with empty hands, wondering where to go with their new degrees. There is currently over $1.2 trillion in outstanding student debt nationwide, with 40 million borrowers and their families struggling in unison – wondering how, and whether, they’ll ever catch up to this debt.

The corporate model of higher education is evident not only in its abuse of learning persons, but in its inability to provide for its faculty and staff. Universities are pooling money at the very top, providing their highest paid administrators with unreasonable salaries while denying campus workers and adjunct faculty access to even their most basic rights. Many campus workers earn less than $15 an hour. A significant population of part-time faculty members is on some form of government assistance, and this comes at no small cost to taxpayers. The American people are subsidizing the predatory policies of corporate universities by spending half a billion dollars every year on government assistance for part-time faculty. The student debt crisis bears eerie similarities to the housing crisis of 2008. Big banks are issuing high-risk loans to students and are getting fat off of exorbitant interest rates. In 2008, after the devastating financial collapse, people began to vent about things like wealth inequality, things like the 99% and the 1%. This anger was harnessed by a group of people who decided to Occupy Wall Street, which exploded into an international movement against the big banks and corporate immunity, calling into question the very nature of capitalism.

Now people are beginning to vent about the crisis of higher education. People are seeing colleges and universities squeezing their students for tens of thousands of dollars and failing to provide for their faculty and staff. The students behind the Million Student March seek to harness the anger around the crisis of student debt and corporate higher education. This could be one of the sparks for the next stage of the struggle in America for a more just and equitable society.

Since Bernie Sanders declared his candidacy for president of the United States, he has played a crucial role in popularizing the call for free higher education. When discussing the need for a movement against student debt, Sanders said: “If a million young people march on Washington, [and] they say … you better vote to deal with student debt, you better vote to make public universities and colleges tuition free, that’s when it will happen.” Socialist Alternative wholeheartedly agrees with Bernie on this, and – like Bernie – we know that free college won’t be won through a polite conversation with the establishment; it’ll be won in the streets.

These demands have been taken up by students, former students, and workers across the country and have gotten the attention and endorsements of organizations like the United States Student Association, Student Labor Action Project, National People’s Action, Flood the System, College Students for Bernie – and, most recently, the National Nurses United.

The national day of action on November 12 is an important first step in a process of ultimately winning free college for students in the U.S. In order to win, the movement will have to build toward bigger mass mobilizations. It will also need to become more deeply linked to the struggles of working people, including campus workers, against cuts to education and social services.

The fight for free education is a fight against the corporate model of education which both the Republicans and the Democrats have supported. It is, therefore, also pointing in the direction of the need for a new independent political force for the 99%. Young people are increasingly rejecting neoliberal capitalism and open to socialist answers. The only way we will truly achieve high-quality, free education for all is by getting rid of this rotten capitalist system.