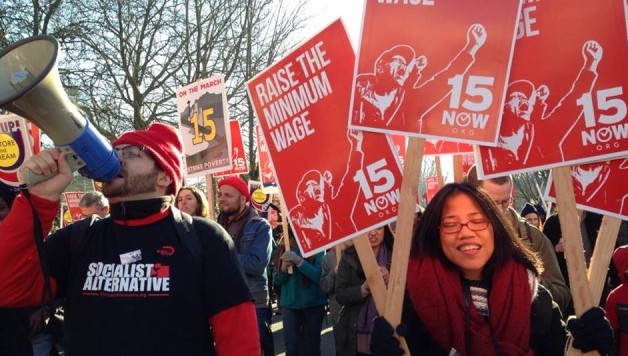 1. We are helping lead the fight back against the 1% Socialist Alternative is the organization that launched the campaign that got Kshama Sawant elected to the city council in Seattle. We used the victory to build a movement that won the first $15/hour minimum wage in a major US city, which has now spread rapidly across the US. We have branches in more than 40 cities across the US. We are workers fighting for a $15 an hour minimum wage and a union. We are students fighting for living wage jobs at our schools. We are trade union members fighting for decent contracts. We are teachers fighting for decent schools. We are activists fighting for affordable housing and climate justice. We are working people standing up to the political domination of the billionaire class.

2. We are building a political movement that’s completely independent of corporate influence The political system is dysfunctional and awash in corporate cash. But, our campaigns for Kshama Sawant won without taking a dime from business. Unlike most politicians, Kshama kept her campaign pledge to fight for a $15 minimum wage, not by making backroom deals but by using her office as a platform to build a grassroots movement. She takes only the average wage of a worker in Seattle, keeping only $40,000 of the exorbitant $120,000 a year salary from the city council and donating the rest to a solidarity fund to assist grassroots struggles. Our victories demonstrate what’s possible if we break from the two parties and rely on our own independent power. We call on the left, unions, and other progressives to come together and run independent pro-worker candidates like Kshama Sawant in every city as a step toward building a new party for the millions, not the millionaires.

3. We have confidence that working people, people of color, women, youth and all oppressed people will fight back and change society Capitalism faces a historic crisis. 95% of all the gains of the so-called recovery have gone to the 1%. While the 1% sees record profits and stock prices, we see record levels of poverty and inequality. Women and people of color are affected disproportionately, while climate change is made worse by capitalism’s addiction to fossil fuels. Already, we have seen the beginnings of a fightback with the uprising in Wisconsin, Occupy Wall Street, fast food and Walmart strikes, #BlackLivesMatter, and big protests against the Keystone XL pipeline. We believe this is just the beginning. Massive struggles of workers, youth, people of color, women, immigrants, and others are on the horizon. These movements will challenge this rotten system, and building a strong socialist movement now will be vital to winning more historic victories.

4. A socialist world is possible

More and more people are beginning to draw the conclusion that an alternative to the dysfunctional capitalist system is needed. Bernie Sanders campaign is showing the widespread openness to socialist ideas. More than 70% of young people in a June gallup poll responded that they would be willing to vote for a socialist for president. We call for building a mass movement around the day to day issues, and linking those struggles to the need to go beyond capitalism. We call for breaking the power of big business by taking the top 500 corporations in public ownership and running them democratically under workers control and management. This would serve as the basis for a radical transformation of society where we could plan the economy to meet the needs of people and the environment, not profit. We are in solidarity with the Committee for a Workers International fighting for a socialist world in more than 40 countries on every continent.

5. There has never been a better time to join than right now

There is a historic opportunity to rebuild a fighting socialist movement. Kshama Sawant’s two years in office have shown what a difference socialist leadership can make for working people. Bernie Sanders is stirring interest in socialism among millions, particularly young people. The establishment is organized. The socialist movement needs to be organized, too. Sign up to become a member of Socialist Alternative today!