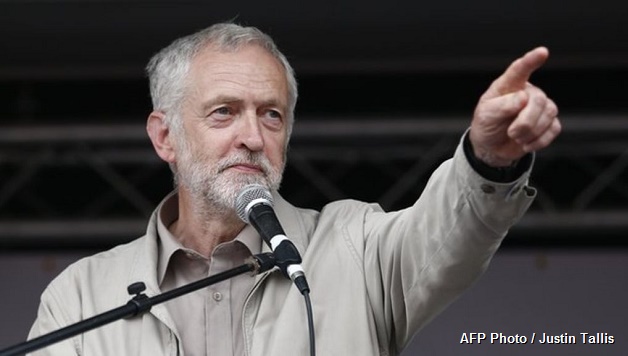 Blairites’ terror at popularity of left-wing ideas in Corbyn campaign

“Right wing Labour backbencher John Mann has called for the Labour leadership contest to be halted as the Labour Party is supposedly being infiltrated by ‘Militant Tendency types’. According to the Daily Mail, chair of the Parliamentary Labour Party, John Cryer MP, has claimed that: ‘Militant supporters are using the Trade Unionist and Socialist Coalition (TUSC) to pay the £3 voting fee.’

“These statements are wholly inaccurate, but reflect the terror of the right-wing clique that dominates the Labour Party at the wave of enthusiasm Jeremy Corbyn’s campaign is generating. Those signing up to vote for Jeremy Corbyn in the leadership election are overwhelmingly young people and trade unionists who are encouraged by seeing an anti-austerity candidate standing for the leadership of Labour.

“This shows the huge popularity of radical and socialist ideas when they are able to gain a platform. As the Socialist Party has repeatedly pointed out working-class people are far to the left of the Labour Party. Support for the renationalisation of energy companies, the Royal Mail and the railway companies reaches 68%, 67% and 66% respectively (YouGov 11 Apr 2013).

“Young people, enthusiastic about anti-austerity ideas and getting active, even if only in a U.S.-style primary election, are the worst nightmare of the Blairites. They have dedicated decades to stamping socialist ideas out of the Labour Party, beginning with the witch-hunt against the Militant Tendency. It is ironic that is their own destruction of the Labour Party’s democratic structures that have inadvertently created this situation. By turning the Labour Party leadership into a kind of US-style ‘primary’ where anyone can vote for £3, they aimed to further marginalise the trade unions and the left in the Labour Party, but they have accidentally let in the voice of the many people who were totally disillusioned by Labour’s endless austerity-lite mantra.

“The Socialist Party (formerly the Militant Tendency) wishes Jeremy Corbyn well in the Labour leadership election. If he is victorious it would be a real step forward and, in effect, the formation of a new party. However, we are part of the Trade Unionist and Socialist Coalition (TUSC) along with the transport workers’ union, the RMT, and many other socialists and trade unionists. TUSC stood over 700 candidates in the elections which took place on 7 May 2015 aiming to begin to create the basis for a new – 100% anti-austerity – party of the working class. We are not encouraging TUSC supporters to join the Labour Party, but rather to continue to build TUSC.

“Whatever the outcome of the Labour leadership election, these events show the popularity of socialist ideas and the possibility of organising around them. In the face of endless austerity we urgently need a party that is prepared to oppose it. If Jeremy is defeated in the election we would urge him and his supporters to escape from the prison of a Labour Party led by a pro-austerity leader and to begin to build such a party – with a clear anti-cuts, socialist programme.

“Far from respecting democracy the Blairites, as Bertolt Brecht put it, want to dissolve the electorate and get a new one! In this situation Jeremy Corbyn would need to mobilise the maximum possible support from across the workers’ movement. We would encourage him to organise a conference of all those who have voted for him, plus the many trade unions – including non-affiliated unions like the RMT, PCS and FBU – which support his programme. The Socialist Party would be happy to participate in such a conference and would encourage other TUSC supporters to do the same.”