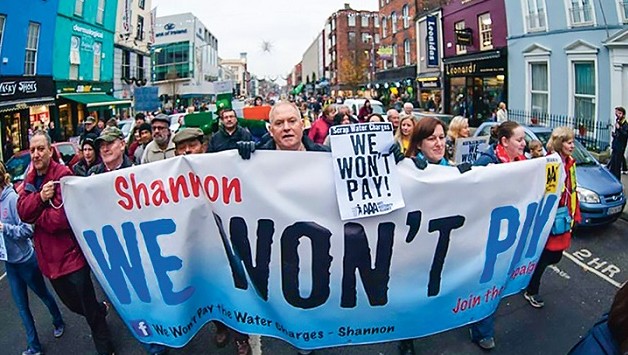 The Irish government’s reticence about revealing the payment figures for the first water bill has proven to be well founded. On Tuesday, an admission came confirming a 57% boycott of the first bill, representing around 860,000 households out of the 1.52 million they claim as their ‘customer’ base.

Irish Water’s claim of 43% of liable households paying the first bill on the eve of the closure of the Dáil [Irish Parliament] for the summer recess is an utter blow to them, Minister Alan Kelly, and the government, as a whole, who would like nothing more than to get out of the country for a couple of months! Meanwhile their attempts on the media and in the Dáil on July 16 to put a spin on the scale of the boycott are completely hollow and are inviting well deserved ridicule across the country.

What has been achieved so far is a testament to the struggle that has been waged by tens of thousands of anti-water charges activists over the course of the last year and a half and whose collective efforts served to influence hundreds of thousands of people to boycott. Most of those who those who did boycott probably never went to a public meeting or protest but were sufficiently confident that there was a campaign fighting the charges and which had answers to Irish Water and the government’s propaganda.

The centrality of non-payment

The scale of the boycott is also a vindication of those like the Socialist Party, the Anti Austerity Alliance and the We Won’t Pay campaign. They placed particular emphasis from the outset on the critical importance of organised non-payment, above all the other necessary and valid tactics employed, in order to achieve victory. They engaged in a debate within the wider water charges movement, making the positive point that the more groups, parties and unions making the case for the boycott the stronger the position we could put ourselves in. Those that have withheld, so far, the explicit call for a boycott, such as Sinn Fein and the unions affiliated with Right2water, should now do so.

With the second billing cycle due, our task now is to extend the boycott by encouraging people who have not paid the first bill to hold firm and making the case to those who did pay the first bill, out of fear or misinformation, to come on board with us. A higher boycott figure for the second bill, with the general election looming ever closer, would be fatal for Irish Water.

Keep the pressure on!

The legislation rammed through the Dáil, which details how Irish Water will go about enforcing the change and pursuing arrears, coupled with a ‘conservation grant’ from the Department of Social Protection, were both intended as last throws of the dice to force up payment levels. But it clearly did not work.

The legislation is a disgrace but opposition to it is not an effective weapon to defeat the boycott tactic. With high levels of non-payment now an established fact, we can expect ever more politicians who did not have an objection to the charges at the outset, to come out with promises of abolition, reflecting the pressure the entire political establishment feels over this issue.

However we cannot be lulled into assuming that the promises of those who aspire to be in the next government can be completely relied upon. Consider the countervailing pressures any future government will come under from the Troika institutions and big business interests. By maintaining a high boycott, up to and beyond the general election, we give the politicians little room to maneuver and every incentive to abolish a hated charge that will likely contribute to the severe weakening of the main governing party, Fine Gael, and the deserved decimation of its junior partner, the Labour Party.