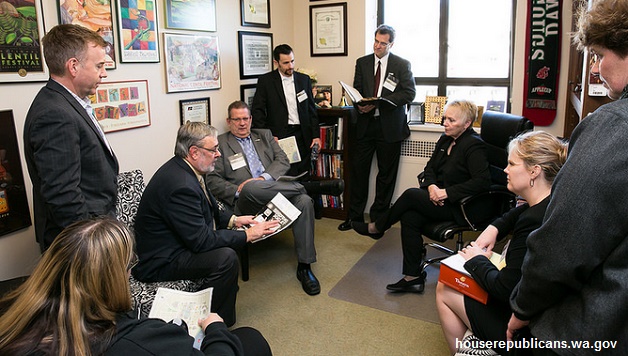 From the spreading of the 15 Now campaign across the country to being featured in The Nation and Democracy Now as well as receiving endorsements from national ﬁgures like Chris Hedges and Jill Stein, it’s clear that Kshama Sawant’s brand of uncompromisingly pro-worker, independent leadership is inspiring to people across the country. It is exactly that inspiring quality that makes her such a threat to the corporate establishment. They recognize that, if left unchecked, the movements that Kshama is helping to build in Seattle – to take back power and resources from the super-wealthy and their corporate politicians – will be eagerly embraced by ordinary people all over the country and represent a serious threat to their proﬁt margins.

Proof that the establishment sees Kshama as a huge threat can be found in the donation records of her opponents in the current city council race.

Donations from Big Developers and Bankers

Public disclosure reports reveal a who’s who of corporate CEOs, big developers, investment bankers, owners of union-busting hotels, and business lobbying groups – like the loudly anti-$15 an hour Washington Restaurant Association – giving thousands to opponents of Kshama. While accepting these donations, they attack Kshama for being more focused on “global socialist revolution” than issues relevant to voters.

Because these big businesses DO have an interest in keeping the minimum wage low, keeping political power in corporate hands, and in preventing the growth of grassroots environmental movements like those Kshama has helped build against oil trains and the Shell arctic drilling platform.

Donate $20 Today to Push Back

The corporate elite are not stupid; they know a credible threat to their power then they see it. And that’s why they are ﬂooding Kshama’s opponents with cash and creating PACs to run attack ads against her.

Will they succeed? Can corporate money drown the struggles of ordinary people for a better world? That’s up to us to decide. Donate to Kshama’s campaign today!