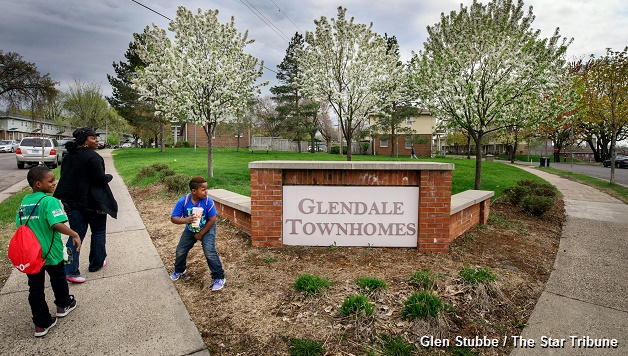 Statement from the Defend Glendale Campaign

Following months of protests, residents of Glendale Townhomes, a public housing complex in Minneapolis’ Prospect Park Neighborhood, are claiming victory after pushing back city plans to demolish and privatize their community. On Thursday over 100 angry residents and supporters gathered for the second Minneapolis Public Housing Authority hearing on the privatization plan. However, even before residents lined up to speak against the proposals, Cam Gordon, the Minneapolis City Councilor for the area, announced plans to indefinitely delay the City Council vote originally scheduled for July 24th.

This temporary reversal of the city’s privatization plan is a major victory for the predominantly immigrant community living in Glendale, and reflects the power of their organized campaign to fight back.

Managed by the Minneapolis Public Housing Authority (MPHA), Glendale is a 14.5 acre public housing complex made up of 184 town homes nestled in the heart of the Prospect Park Neighborhood. Over 270 residents of Glendale Townhomes signed a petition calling on City Council to vote down the privatization proposals and pledged to resist eviction if the plans went forward. Of the 184 households in Glendale, residents in 140 households signed onto the petition opposing the MPHA plan. Although this is a big victory for the Glendale community, our fight to save our homes is not over. We expect MPHA to return in the months or years ahead with a new attempt to carry forward with their privatization plan.

Our Glendale community and our neighbors across Prospect Park stood up, got organized, and said no to privatization, no to gentrification, and yes to publicly owned and operated affordable housing in Minneapolis. Defying racist stereotypes of public housing, many neighbors from the surrounding mixed income Prospect Park testified at the MPHA hearing about how they value the diversity and other contributions Glendale residents bring to the wider community.

Residents have been organizing for months, with dozens attending regular Defend Glendale meetings, canvassing fellow residents and the wider Prospect Park neighborhood. In the process we have united our community. We have ensured that our meetings are translated into Hmong, Lao, Oromo, Somali, and English. We are standing together and we will not let big developers, city hall, or MPHA budget cuts tear our community apart.

Manivanh Voravong, a Glendale resident and member of the Prospect Park Neighborhood Association’s Glendale Committee explained: “Many of us are already refugees. We already lost our homes once. We will not be treated like animals. We are human beings and we have a right to a home.”

Glendale is not the problem. The problem are the policies of gentrification and budget cuts that favor the needs of big developers over working class and low-income families. We need to protect the public housing we have in Minneapolis. But we also need more quality, publicly owned, funded, and operated housing.

The Twin Cities metro area is incredibly wealthy, home to nineteen Fortune 500 companies and a well educated, productive workforce. There is no genuine financial crisis, but there is a crisis of political priorities when city leaders and agencies like MPHA consider handing over public housing to private developers rather than using their positions to rally popular power for more funding.

As profit-driven private developers continue to gentrify our city, pricing out low income residents and communities of color, we need to build a movement to transform our city’s housing policy from one that favors developer profits into one that prioritizes the preservation, improvement, and expansion of quality public housing.

The residents of Glendale and their allies have shown that Glendale is public housing that works. Defend Glendale wants to express its gratitude for all of the people that made this campaign a success: Prospect Park Association, Prospect Park neighbors, Socialist Alternative, Center for Earth Energy and Democracy, Representative Phyllis Kahn, and Council Member Cam Gordon. Most of all we want to thank the residents of Glendale, the real force behind this campaign who made this victory possible.