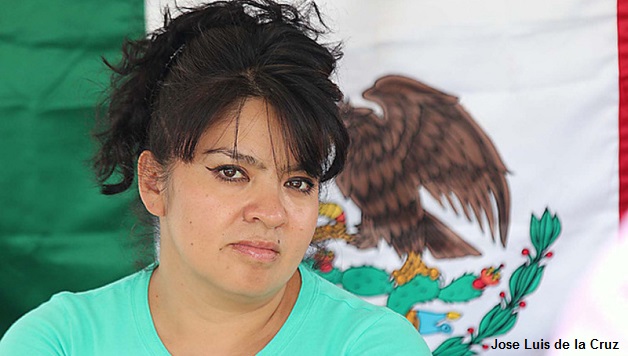 Nestora Salgado, an imprisoned community activist in the Mexican state of Guerrero, started a hunger strike on May 5th, and concern for her safety is growing. Nestora, who is a U.S. citizen and lived in Seattle for 20 years, started a local indigenous community police force in her hometown, Olinala, in Guerrero. She started her hunger strike in protest against her illegal detention since August 2013 and mistreatment by the prison authorities.

Drug-related crime and violence has plagued Mexican social life for many years and driven the population of poor states like Guerrero to organise local self-defense groups to protect their communities. The power of the drug lords has penetrated all layers of the Mexican society – the army, the lawyers, and the government.

Last year, 43 students from Ayotzinapa were kidnapped, and until now, the government of Enrique Penna Nieto has not given any answer to the students’ families who want to know what has happened to them.

Nestora’s U.S.-based lawyers accuse the Mexican government of negligence. “For weeks we have attempted to negotiate with Mexican officials for her release, but they have defied their international obligations,” said a statement from Seattle University School of Law professor Thomas Antkowiak. According to the statement, Nestora has been drugged and tortured.

Her supporters, who have staged protests in many countries to demand her release, insist her detention is politically motivated and lacks any legal basis. She was arrested and accused of ‘kidnapping’ because the community police force she led arrested a local city official on suspicion of involvement in the drug trade.

After more than two weeks on hunger strike, Nestora’s health has deteriorated, according her daughter, Zaira Rodriguez. Before the strike she did not receive the medicine she needs, and now, after starting the hunger strike, her situation is deteriorating as reported by the Mexican newspaper La Jornada. To destroy the activist, the authorities have moved on to torture. She only drinks water and they put a table of food in front of her in an attempt to break her will.

Nestora needs the solidarity of workers around the world. Protests are being arranged in coming days outside Mexican embassies and consulates. Please show your support!

Solidarity messages can be sent to: freenestora@gmail.com