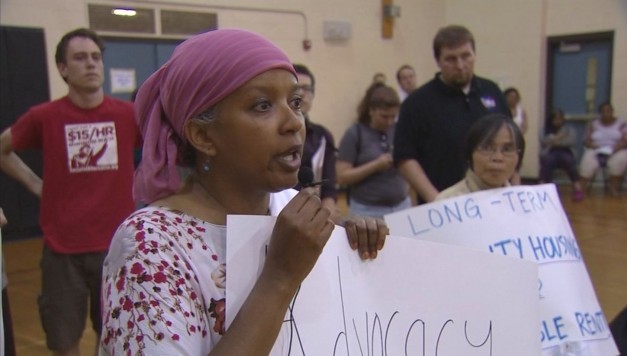 “Where are we going to go? Where are all of these hundreds of children going to go,” asked Michelle Montbriand, resident of Glendale Townhomes, a public housing complex scheduled for demolition and privatization by the Minneapolis Public Housing Authority.

150 residents from Glendale Townhomes and community allies packed the Minneapolis Public Housing Authority (MPHA) public hearing Monday night to protest the city’s plans to sell Glendale Townhomes to private developers. Glendale is one of the last city-owned housing complexes. It provides 184 income based units to low-income families, predominantly from the East African, Hmong and African American communities. After Glendale Townhome residents reached out to Socialist Alternative for help, Socialist Alternative have been assisting residents organize the fight back.

Rental prices are skyrocketing across the Twin Cities, pricing more and more working families out and destabilizing communities. A 2015 study showed you need to earn $19.50/hour to rent an average 2 bedroom apartment at market value in Hennepin County, which is completely out of reach for low-wage workers (Out of Reach, 2015). City policy favoring profit-driven developers is contributing to gentrification and deepening racial disparities in Minneapolis.

“This struggle is not only about saving Glendale Townhomes” said, Ladan Yusuf, Glendale Townhomes resident. “The city of Minneapolis should embark on a major program to expand access to city-owned affordable housing, to ensure low-income families, especially people of color and immigrants, have a place in our city. We need to stop gentrification in Minneapolis.”

“I don’t want to move anywhere else,” resident Khadro Warsame said. Many of Glendale’s residents have lived there for years, some for decades, and have made the surrounding Prospect Park community home. They rely on Glendale’s proximity to the Light Rail to get to work, and have trust in the local school, Pratt Elementary

The current proposal is to bulldoze Glendale Townhomes and evict residents during the construction process to make way for the construction of a 500 unit privately owned apartment complex, of which 184 units would be reserved for residents with Section 8 vouchers.

MPHA officials maintain that the Rental Assistance Demonstration (RAD) program is a “sustainable” way to continue to fund public housing, which is currently experiencing a budget shortfall. Organizers point out that the budget shortfall is manufactured, part of the arbitrary “sequestration” cuts to federal programs last year, and that the city has the funds to cover the difference if affordable housing were a real priority.

Glendale residents are also skeptical about MPHA’s repeated promises that Section 8 vouchers will solve the problem. Besides the fact residents would need to move away for years during construction, there is a severe rental shortage in the Twin Cities, and landlords regularly discriminate against people with Section 8 vouchers. For example, in the past six months, 38 percent of the families who received vouchers in Dakota County could not find an apartment before the vouchers expired, leaving hundreds of families who qualify for Section 8 living in overcrowded homeless shelters while they look for housing (Star Tribune, 5/9/15).

Socialist Alternative stands in solidarity with the residents of Glendale Townhomes and community allies in their fight to stop the privatization of city-owned affordable housing, and will continue to actively build the struggle to make Minneapolis affordable for all its residents. We endorse the residents’ demands that the Mayor Hodges and City Council to direct the Minneapolis Public Housing Authority (MPHA) to:

We should be clear that it will take a movement to challenge the powerful real estate interests which dominate city politics. Developers use their wealth and influence to shape urban planning and city policy. Under capitalism, the basic human need for shelter is transformed into a money making machine for developers and real-estate conglomerates, who are more than happy to uproot entire communities if it helps their bottom line. Housing prices in Minneapolis and nationally are out of control. The Glendale residents are showing what’s necessary to defend and expand affordable housing in Minneapolis and they deserve our active support.