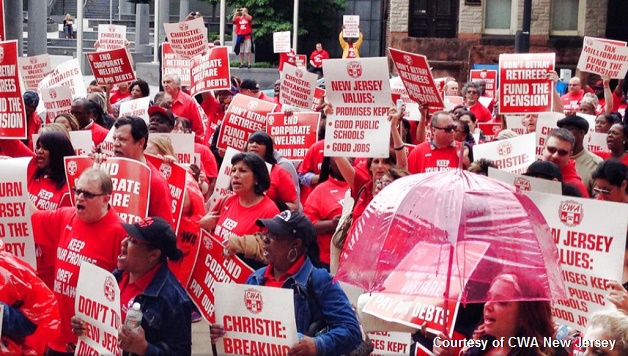 New Jersey’s notoriously anti-worker Republican Governor Chris Christie recently presided over the decision to cut $1.57 billion dollars from the state’s public pension and benefit system. These cuts will impact both current workers and retirees who have spent years paying into their pensions with the hopes of having a stable retirement.

According to a recent report from the National Association of State Retirement Administrators, New Jersey has spent the last decade at the bottom of the list for adequate public pension funding. With the current rate of funding and continued cuts, the pension program is expected run out of money by 2024. Meanwhile, corporations have received more than $4.3 billion in tax breaks. This dire situation has provoked resistance from several angles.

New Jersey’s largest public sector unions, the New Jersey Education Association (NJEA) and the Communication Workers of America (CWA) have filed lawsuits against Christie for failing to fund the pension. Key to putting this legal challenge at the forefront of New Jersey politics is the participation of rank-and-file union members in rallies and marches in the state’s capital, Trenton, over the past few months.

Governor Christie has traveled across the state to speak and answer questions at local town halls. These town halls have become the center of protests and direct actions against the Governor’s various attacks on working people. Recently, members of the grassroots organization New Jersey Communities United attempted a citizens’ arrest of Governor Christie for his assault on the public workers’ pensions. Teachers and other public sector workers have used these highly publicized events as grounds for debating the governor and civil disobedience.

Throughout the state, rank-and-file union members, many of them supporters of the Democratic Party, have vehemently opposed this assault on pensions. However, the Democrat-controlled New Jersey Legislature approved Christie’s budget and has played an active role in decades of severe pension underfunding. As working people throughout the state are rising up against these attacks, more than 60 Democratic Party officials endorsed Christie and appeared in his campaign materials during the last election. The resources spent on “getting out the vote” for these corporate politicians could be used to mobilize working people against the budget cuts and to organize independent left-wing candidates and coalitions as a step toward building a mass party of working people and youth.

Through a serious stepping up of mass mobilizations on Trenton; protests across the state and laying the basis to challenge Democratic politicians in the pockets of big business, working people could win this fight. The unions should also immediately initiate local workplace informational pickets to rally workers on the job.

The media and the political establishment constantly harp on the idea that there is “no money”. When Christie talked about his “tough decisions” and sarcastically alluded to a fictitious “money tree” to fund the pension, he failed to mention the high number of millionaires living in New Jersey. New Jersey currently has the 2nd-highest percentage of households whose net worth is at least $1 million. On the other hand, the state’s poverty rate reached a 52-year high in 2014. We must demand an increase in taxes on New Jersey’s millionaires. Building a serious working class political challenge to the corporate establishment on the streets and at the ballot box can win higher taxes on the rich and a reversal of all cuts to education and other social services as well as a properly funded pension system.

Capitalism means that workers and retirees will continue to see attacks on their standard of living. Ordinary people must come together and mobilize for a world where we can democratically control the resources and wealth we create. We must demand a national retirement system to ensure a decent and dignified future for all. Socialism is the only answer to the barbarism we are facing.