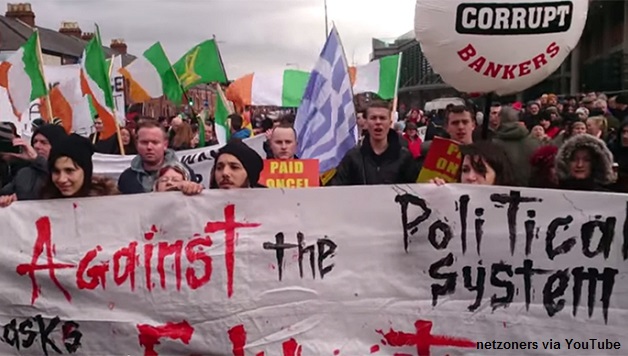 As Socialist Alternative goes to press, 80,000 people protested against the water charges on the streets of Dublin.

The economic crisis that unfolded in Europe in 2007/2008 had a drastic effect in Southern Europe, particularly Greece, but it also hit Ireland very hard. Like Spain, Ireland suffered from huge speculation by property developers and predatory lending by the banks. With the Irish banking system in crisis, Ireland was forced into accepting a bailout from the so-called Troika, consisting of the European Commission, the European Central Bank (ECB), and the International Monetary Fund (IMF). Attached to the bailout was a savage austerity program which led to a serious decline of living standards for working people, mass unemployment, massive cuts to the public sector, and emigration levels not seen in decades.

Water charges are just one of a series of regressive taxes implemented as part of this bailout agreement. Yet again, it is working people who are forced to foot the bill for the reckless behavior of property speculators and the banks that caused the crisis.

The cost of the charge for working families will be more than $500 a year and, even though there is a cap on charges, this is likely to change and bills could skyrocket. It is against this backdrop that we have seen mass mobilizations, with 100,000 people taking to the streets of Dublin last December protesting the charges, in addition to protests in 93 towns and cities.

Across the country, neighborhood groups have been set up under the banner of “We Won’t Pay.” When water meters began to be installed in households, these groups emerged onto the streets in direct actions against such measures. The police and private security firms employed by Irish Water have responded by arresting and harassing those peaceful protesters.

These mobilizations reflect the deep desire of working people to fight back after six years of crisis and austerity and the general sense that enough is enough. As Paul Murphy, member of the Dáil (the Irish parliament) for the Socialist Party and the Anti-Austerity Alliance (AAA), states, “Water charges are, for many, the straw that broke the camel’s back, and the pent-up anger is now exploding.” The Socialist Party in Ireland is part of the Committee for a Workers International (CWI), with which Socialist Alternative in the U.S. is also affiliated. Paul and the two other Socialist Party members of the Dáil have played a key role in this unfolding struggle. The role of the establishment political parties in bringing in water charges, including that of the Labour Party, has contributed to a rapid decline in support for these parties and a huge opening for the left. The government, made up of Labour and Fine Gael, has decided to respond with a mix of halfhearted concessions and naked repression.

In early February, a series of dawn raids by the police led to the arrest of 17 anti-water-charges activists, including Paul Murphy, in connection with a militant but peaceful sit-down protest three months before during which Joan Burton, the deputy prime minister, was detained in her car for a couple hours. This is a clear attempt to weaken the movement and instill fear among those fighting back. The corporate media played their part by painting a violent picture of protesters and smearing the campaign. But these tactics by the government have only hardened the determination of working-class people to resist.

The AAA and Socialist Party are calling for mass nonpayment when the bills come into effect. Penalties will not come into effect until 2016, by which time there must be a general election. This is the only way to defeat the water charges and send a clear message to the government.

The outcome of this struggle will have huge consequences. It also comes as the election of the Syriza government in Greece and the growing strength of the left in Spain are giving hope to people across Europe and in Ireland that austerity can be resisted and defeated. To quote Paul Murphy again: “If water charges can be defeated, it will probably collapse the government but, crucially, it will completely transform the situation and make it extremely difficult for any future government to continue with austerity policies.”

A serious discussion is developing among the activists in the water charges movement of how to turn the mass sentiment into a more decisive political challenge to the entire establishment. The Anti-Austerity Alliance and the Socialist Party are urging the widest possible slate of anti-water-charges candidates. This will be a major step toward building a strong political force for working class people in the years ahead.

The Teacher Revolt Is Not Over

Ten Years Since the Crash

Coronavirus and the Profiteering of Big Pharma

WorkersSpeakOut: Walmart Janitor: my manager told me not to clean the staff room

WorkersSpeakOut: I’m a grocery store worker, and have no idea what I’m being paid.