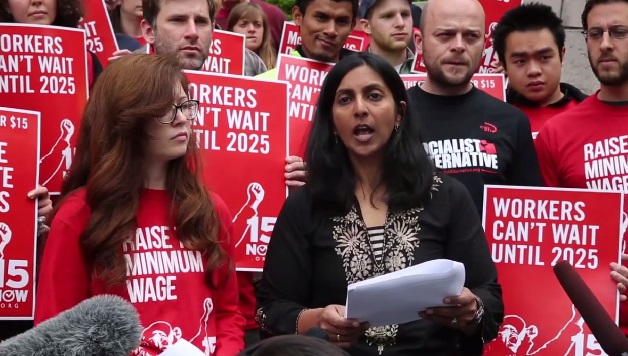 Organizing the Defense against Skyrocketing Rents

Last year, Seattle had the fastest-rising rent among all major U.S. cities, and moved into the top 10 most expensive cities for renters. Communities across Seattle, especially in District 3 where Kshama Sawant is running for re-election, have seen their neighborhoods torn apart by “economic evictions.” Big developers are buying up old buildings and pricing renters out of the homes they’ve built their lives in.

At a time when bold measures are needed that put the interests of working people, families, and renters front and center, the corporate politicians on the City Council continue to line the pockets of developers, most recently with a $528,000 giveaway to the multibillion-dollar Vulcan Inc. Is it a coincidence that the council’s conservative majority have received more than $25,000 from Vulcan and its top executives?

To address the stratospheric rises in rents, Kshama Sawant is proposing the city build thousands of high-quality, modern, affordable housing units for working families and the middle class on public lands financed through a municipal bonds sale. She is also demanding developers be taxed at much higher rates to fund the construction of low-income housing. Moreover, to rein in the rapacious developers who are making fabulous profits, she is raising the need for rent control as part of her demand for a “Tenants’ Bill of Rights.”

To see her program to make housing affordable, visit KshamaSawant.org.

On March 3, over 300 people packed a historically queer church to hear Kshama Sawant and other community members. The public hearing was organized by the socialist council member to discuss hate crimes against LGBTQ people. In Seattle, there’s a problem: queers are harassed and physically attacked, and a transwoman and local community leader  reported at the hearing that police beat her down and called her a “faggot.”

The police precinct covering Capitol Hill, in the heart of District 3 where Kshama is running for re-election, reported 55 bias incidents in 2014, an increase of 28% over the previous year (The Seattle Times, 03/15/2015). The Capitol Hill neighborhood, once a haven for LGBTQ people, is being rapidly gentrified by big developers.

The issue has gone largely unaddressed publicly. But Kshama is uniquely using her council seat to actually represent the folks who need and deserve a voice.

Participants developed concrete steps to keep our community safer, like city funding to tackle queer homelessness, support for community watch efforts, and a queer center in Seattle. Kshama Sawant’s office will follow up on these steps, and the organizing know-how of Socialist Alternative will be a vital support to any of these efforts.

As Melissa from Portland Socialist Alternative said at the forum, us queers have to “stay safe, stay strong, and stay visible.”

How You Can Help

At a time when billionaires have the “right” to unload their bank accounts on elections, Kshama Sawant is running for re-election in Seattle and won’t be taking a dime from corporations. With your help, we can defend this city council seat for the struggles of working people.

We Can Win Against Big Business

Two years ago, Sawant won more than 90,000 votes, defeating a 16-year incumbent and stunning the establishment. We used the momentum of our victory to immediately launch a grassroots campaign for a $15 an hour minimum wage. Within six months, we won the highest minimum wage in the country.

And Kshama was no one-trick pony! When the Seattle Housing Authority proposed raising low-income rents by 400 percent, her council office helped the tenants organize themselves and defeat it.

During the City of Seattle budget discussions, Kshama Sawant brought together a broad coalition of unions, affordable housing advocates, and civil rights organizations to demand a “People’s Budget,” which succeeded in winning a number of significant improvements, including millions in increased funding for social services and immediately bumping city workers to $15, as opposed to the mayor’s plan to phase it in over three years.

Kshama’s campaign will be up against big money this year, including national corporate lobbying groups. Our campaign is only taking donations from ordinary people. If you have been inspired by Kshama’s example and share our vision for building a new political force that fights for ordinary people and not corporations, then we need you to donate generously.

If you can only make a small donation, that helps, too. We need every penny. And if you can sign up to donate $10, $25, $50, or more on a monthly basis, then you can help us build a permanent funding base for our campaign to re-elect a real fighter for working people.

“I want to stress how important the re-election of Kshama Sawant is, nationally, … if we want to overturn the corporate coup d’etat that’s taking place. And you can be sure that not only the establishment in Seattle but the establishment nationally is determined to crush this movement … because it expresses the real concerns, the real desires, and the real needs of working men and women in this country. And those needs have been utterly abandoned by both the Democratic and Republican parties which are beholden to corporate power and corporate money.”